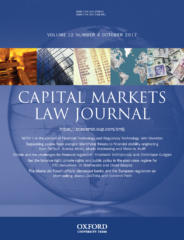 The European continent operates a legal system derived from the Napoleonic Code, first enacted in 1804. Napoleon was, I venture to point out, and without meaning to be too critical, a revolutionary dictator. He gathered four eminent jurists together and, as dictators are wont to do, ordered that they produce an all-encompassing system of law for his judges to administer to the nation. Here in England, we had the good fortune to have monarchs who were too busy enjoying the life of a monarch to want to get involved with the minutiae of promulgating comprehensive legal codes. They took an altogether more relaxed approach: they chose the people they trusted, appointed them as judges, and told them to go forth and work out the answers for themselves.

Perhaps by luck rather than good judgment, then, there are significant differences between the work done by judges in these two systems, which, makes the common law attractive to international markets. Both common law judges and their civil code colleagues have the task of administering statutory law that the legislature passes by applying relevant statutes to the facts of each case. This task involves interpreting and occasionally improving the pale letter of the statute so that, through public judgments, the laws passed by Parliament come to be understood in practice and observed by those who are subject to them. That much is plain sailing. Common law judges, however, have an additional function – as a result of their monarch’s initial generous terms of reference – which goes well beyond their European colleagues’ remit of administering an all-encompassing statutory scheme to a grateful nation: to make law through the very cases they decide. This is the common law doctrine of binding precedent – ‘case law’ – in its pure form. The common law courts are therefore a separate source of law in common law jurisdictions, independent of and additional to the legislature.

So what is attractive to international financial markets about the common law courts’ law making powers? There are, no doubt, those within the FSI who will be familiar with the expensive and difficult task of influencing governments to pass legislation – and regulation, its younger sister – which enables the FSI to thrive. There is an electorate on the other side of the process which often attempts to influence governments in different directions; those electorates are very properly vigilant to protect their interests by parliamentary and extra-parliamentary means, as they know there is no one else looking out for them. Ask any former President of France who has tried to tinker with the labour market: legislating is a difficult, expensive, and often unrewarding business. And when the ink finally dries on the vellum, bringing one political event to a close, the nation state has at last settled the terms it will dictate to the market until the next political event, whenever that may be. When viewed in that context, the remote and anonymous corridors of Brussels, which the UK is about to quit, must seem like an Elysium in comparison. No wonder so many people are so furious.

What is attractive to international financial markets about the common law courts’ law making powers?

Judge-made case law, on the other hand, arises independently of the political process. It is law created in response to demand for it in the marketplace. It operates like this. Counterparties in a marketplace enter into an agreement. On occasion they fall into disagreement about the meaning of the agreement they struck. At that moment – i.e. at the point of dispute – demand for law arises. The parties approach the court, the court hears argument, then gives its judgment in public. At that point – the point of resolution of the dispute – the court supplies law in response to market demand. Over time, as similar disputes go through the common law system, principles for deciding those types of cases emerge. The market observes those principles closely and adjusts its behaviour in accordance with the norms established by the court. Parliamentary activity plays no part.

So it is that common law judges provide what we can fairly describe as a constant ‘feedback loop’ for the markets they serve; they can adapt, refine, or create – and occasionally change – the law at any time upon a market participant issuing a claim form before the common law courts. This constant ability for the supply of law to meet demand in the market place for its creation means the common law courts are the friend of market innovation. The common law process of law-creation is independent of the political cycles. The fact that an electorate trusts judges to have a significant role in law-creation tends to make parliamentary politics more stable. In turn, stable politics creates stable markets. Stable markets attract more market activity. When it works, it creates a virtuous circle.

European civil code law gives no scope for judges to create law. Instead the civil code is imposed by the state intermittently on the market when national politics allows. Did I say intermittently? I do not wish to be unfair. On 1 October 2016, the French civil code received its first major revision, 212 years after it was first proclaimed by Napoleon. So the role of common law judges in making law may explain in President Macron’s decision: international markets do not want to be dependent on any national parliament for the development of the law to keep up with the innovation of international markets; like British monarchs before them, they prefer to put that work in the hands of judges they trust.

Richard Samuel is a barrister at 3 Hare Court, London. His article "The FCA has now listened: Banks, it is in your interests to listen too" is published in Capital Markets Law Journal (Volume 13, Issue 1).