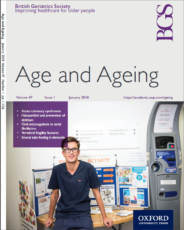 Age and Ageing is an international journal publishing refereed original articles and commissioned reviews on geriatric medicine and gerontology. Its range includes research on human ageing and clinical, epidemiological, and psychological aspects of later life.

The 200th anniversary of James Parkinson’s seminal Essay on the Shaking Palsy gives cause for commemoration and reflection. Parkinson’s astute observation and careful description of only six patients led to one of the earliest and most complete clinical descriptions of Parkinson’s disease. With the concept of a syndrome still not fully realised, Parkinson was among the first writers to unify a set of seemingly unrelated symptoms into one diagnosis.

Parkinson was a true polymath; his biography reveals a colourful life even for the time: from botanist and palaeontologist to political and medical reformer. His extensive writings on patient autonomy, the role of the clinician, and the public management of health portray a professional deeply concerned with the responsibilities of health care specialists in the widest sense.

He challenged the medical community to find therapeutic interventions for the syndrome he described and rightly suspected progress would require better understanding of the underlying pathology. Over the last 200 years, some of the most eminent names in the neurosciences have risen to Parkinson’s challenge. From the great French neurologist Jean-Martin Charcot, who named the condition in Parkinson’s honour, to Konstantin Tretiakoff, Arvid Carlsonn, and Oleh Hornykiewicz there has been an iterative improvement in understanding. A traceable narrative builds on the foundations laid by Parkinson.

Gavin Gordon is a medical student from Newcastle University currently intercalating in the History of Medicine MA programme. He is the co-author of "200 Years of Parkinson’s disease: what have we learnt from James Parkinson?" recently published in Age and Ageing.

Could too low blood pressure in old age increase mortality?