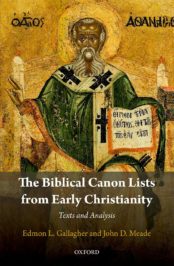 The Biblical Canon Lists from Early Christianity: Texts and Analysis

One of the side effects of the Protestant Reformation was intense scrutiny of the biblical canon and its contents. Martin Luther did not broach the issue in his 95 Theses, but not long after he drove that fateful nail into the door of the Wittenberg chapel, it became clear that the exact contents of the biblical canon would need to be addressed. Luther increasingly claimed that Christian doctrine should rest on biblical authority, a proposition made somewhat difficult if there is disagreement on which books can confer “biblical authority.” (Consider, e.g., the role of 2 Maccabees at the Leipzig Debate.) There was disagreement—and there had been disagreement for a millennium or more beforehand. Almost always, the sixteenth-century disputants pointed back to Christian authors in the fourth century or thereabouts for authoritative statements on the content of the Bible.

But fourth-century Christians themselves disagreed on precisely which books constituted God’s authentic revelation. Especially with regard to the books most in dispute in the sixteenth century—the so-called deuterocanonical books of the Old Testament—the fourth century could provide no assured guide because even those ancient luminaries, St. Jerome and St. Augustine, disagreed particularly on the status of these books.

In the sixteenth century, it was not clear whether these books belonged in the Bible or not; different theologians and church authorities took different positions on the matter, and there had never been a council that settled the issue for the entire church. While these books appeared in biblical manuscripts and printed Bibles, it was not uncommon in the Latin Church to question their status. For instance, one of the great publishing ventures of the early part of the century was the Complutensian Polyglot, a Bible printed in multiple languages in the Spanish town of Alcalá (Latin name: Complutum), produced under the oversight of the Roman Catholic Cardinal Jiménez de Cisneros and granted permission for publication by Pope Leo X in 1520. While this Bible includes the deuterocanonical books, Cardinal Jiménez explains in a preface that they “are books outside the canon which the Church has received more for the edification of the people than for the authoritative confirmation of ecclesiastical dogmas.”

When Martin Luther debated Johann Eck at Leipzig in 1519 on various Catholic doctrines that Luther rejected, Luther probably did not feel that he was stirring controversy by disputing the canonicity of 2 Maccabees, since Catholic Cardinals in full communion with Rome were doing the same thing at the time. Such a position became unacceptable for a Roman Catholic only after the Council of Trent in 1546 declared all of the deuterocanonical books to be fully canonical, a position that made many Protestants more vehement in their rejection of these books. But the earlier Protestant position had valued these books for Christian edification. When Luther translated them as part of his German translation of the entire Bible, he sounded much like Cardinal Jiménez in describing them as “books that do not belong to Holy Scripture but are useful and good to read.”

Both Protestants and Catholics pointed to earlier times, especially the fourth century, as confirming their own views.

They were both right.

The origins of the Bible stretch back a long way before the Common Era, but the fourth century CE was an important time for the Bible. One could say that the Bible was invented in the fourth century, since for the first time all of Scripture could be—and was—contained in a single cover (see Codex Sinaiticus and Codex Vaticanus), rather than in small codices or scrolls that included only a few biblical books. It was also a time when some Christians were interested in clarifying which books counted as revelation from God, and which books didn’t. They composed lists of the books of the Bible: these lists were very similar to one another, but they also differed in important ways.

In the West, the biblical canon lists usually (not always) agreed completely on the books of the New Testament. In the East, the New Testament was, again, usually very similar across the lists, though the Book of Revelation was long disputed. But the status of the Old Testament deuterocanonical books in both the East and the West proved challenging. The fourth-century lists in the East—composed by such figures as Origen of Alexandria/Caesarea, Athanasius of Alexandria, Cyril of Jerusalem, and Gregory of Nazianzus—omitted almost all of them, but these books found a warmer welcome in the West.

Here we come to Jerome and Augustine, the greatest biblical scholar and the greatest theologian, respectively, in the early Latin church. These two churchmen composed lists of Old Testament books within a few years of each other, during the last decade of the fourth century. As for the deuterocanonical books, Augustine did not even mention the issue within his discussion of the canon; he quietly listed all these books in their respective sections of the Bible.

Jerome, the primary translator of the Latin Vulgate, took the opposite path. Not only did he exclude the deuterocanonical books from his biblical canon, but he was far from silent on the issue. In his most well-known statement on the matter—a preface to his translation of the books of Samuel and Kings—Jerome listed all the books of the Old Testament in (what he took to be) the order of the Jewish Bible, thus without the deuterocanonical books. Then he brought up the issue, asserting that the books we call deuterocanonical are actually “apocrypha” and should be excluded from the Bible.

Like the Protestants and their Catholic opponents, neither Jerome nor Augustine were coming up with a new teaching on the biblical canon—they were both passing along what they took to be Christian tradition as they had received it. Augustine was right that for many Christians, particularly in the West, the deuterocanonical books had functioned as Scripture and appeared in canon lists for decades before the late fourth century. Jerome was right that for many Christians, particularly in the East and those Latin-speakers influenced by the East, the deuterocanonical books had not been considered on par with the other books of the Bible and had consequently been omitted from many biblical canon lists.

Catholics and Protestants have different Bibles today because of the disputes of the sixteenth century, when the opposing sides each claimed that the early church supported their own views.

The bottom line is: they were both right.

The Reformation and Lutheran baroque