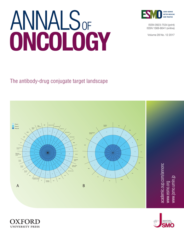 Annals of Oncology, the journal of the European Society for Medical Oncology and the Japanese Society of Medical Oncology, provides rapid and efficient peer-review publications on innovative cancer treatments or translational work related to oncology and precision medicine.

In November last year, after much debate over cost, the National Institute for Health and Care Excellence (NICE) approved two new drugs for treatment of breast cancer for use on the NHS. Although first approval happened some time ago, this decision to make palbociclib and ribociclib available on the NHS, gives thousands more people access. Categorised as breakthrough therapy by the FDA and deemed ‘ground-breaking’ in the media, the bar is set high. But what exactly are these drugs and are they really as ‘breakthrough’ as they seem?

The cell cycle is comprised of four stages, resulting in the replication of DNA and formation of new cells. CDKs are regulatory enzymes which exist in all stages of the cycle and control the signalling pathways at various checkpoints during replication. CDK4 and CDK6 are active in the first stage of the cycle (G1) and allow for transition into the next phase. In normal cells expression of both these CDKs are tightly regulated. However in cancer cells these restrictions fail, CDKs are switched into overdrive, and there is increased proliferation of cells. By targeting these proteins uncontrolled cell division is inhibited, slowing tumour progression and hence prolonging life.

Personalised medicine, also known as precision medicine, is a rapidly growing sector within healthcare and has provided beneficial results so far. The view that treatment should be less one-size-fits-all and more tailored to the specific individual has allowed for the varying genetics and cancers between patients.

At present there is no cure for metastatic breast cancer and so current treatment is primarily palliative, focusing on extending length and improving quality of life. Within the current standards of care, maintaining these factors when beginning treatment with new agents is of great importance. Palbociclib was found to be able to postpone deterioration in patients’ quality of life when administered together with hormone therapy. Whilst slowing disease progression, it is hoped that both palbociclib and ribociclib will also decrease the amount of patients undergoing chemotherapy and suffering its hostile side effects. Neutropenia, a low white blood cell count, is the most common side effect exerted by the two drugs and is mostly manageable.

In England there are approximately 45,000 new breast cancer cases per year and whilst 70% of all breast cancers are HR positive, it is projected that only around 8,000 people will be a suitable candidate for palbociclib or ribociclib therapy. Palbociclib will be available to women in which cancer spreads before clinical diagnosis and those patients who are post-menopausal will be eligible to receive ribociclib. While the numbers seem small, the worth of added time to spend with loved ones is paramount to patients and somewhat invaluable.

So what does the future hold for CDK inhibitors? A third CDK inhibitor, abemaciclib, was approved by the FDA in September of last year, but is yet to be rolled out onto the NHS. The key difference between abemaciclib, palbociclib, and ribociclib is that the first can be used as standalone treatment; whereas the other two are administered with supplementary drugs (either fulvestrant or an aromatase inhibitor). Side effects for abemaciclib are more revolved around fatigue and gastrointestinal related issues, due to its difference in structure.

Clinical trials of these drugs are a culmination of over 20 years of CDK development. Concluded results provide substantial backing for even further investment into CDK inhibitor drugs to treat other cancers, such as non-small cell lung cancer and melanoma. However, many concerns revolve around expansion of biomarkers to identify which tumours and patients would benefit the most.

So are they both as breakthrough as they seem? If we’re going on purely evidential data, yes. But in terms of really making a difference – that’s down to the patients.

Kiashini Sriharan is a Science Content Analyst in the Medicine team at Oxford University Press.