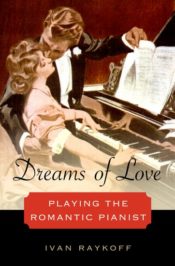 A rich sensuality of touch permeates Luca Guadagnino’s new film Call Me By Your Name, based on André Aciman’s 2007 novel of the same name. This tactile quality comes through not only in its evocative visual imagery: close-ups of hands and fingers and feet, shoulder rubs, sweaty bare skin glistening in the sun, bodies lounging on lush grass or jumping into chilly spring-fed ponds, soft-boiled eggs and ripe fruits bursting with juices, the broken limbs and pitted patina of ancient bronzes. Music also performs a crucial role in the movie’s simulations and stimulations of touch, heightening its visual vocabulary with a palpable tactility of sound, particularly that of the piano.

In a few scenes the prodigious Elio (Timothée Chalamet) plays the family’s Bösendorfer grand. This tactility through sound is especially clear in the scene of Elio playing the “Postillion’s Aria” from J. S. Bach’s Capriccio on the Departure of a Beloved Brother in the manner of Franz Liszt and Ferruccio Busoni. (Christoph Wolff suggests that Bach composed this suite as a farewell to a departing friend when he was only seventeen years old, the same age as Elio.) The original tune and the two arrangements allow Elio to touch the piano keys—and by extension to touch Oliver (Armie Hammer), who is standing directly in line with the keyboard in this frame—in a variety of expressive ways: delicately, cleverly, intently, forcefully, madly. The faces Elio makes as he plays comically mirror the gestures of his hand-crossings and emphatic octaves. Despite Oliver’s entreaties for Elio to play the version he had played on the guitar, Elio teasingly alters it in these different pianistic guises, emoting dramatically. After this passive-aggressive foreplay he finally offers the original tune, revealing his true feelings through the gentler sounds his touch produces.

When Elio plays Erik Satie’s Sonatine bureaucratique, his attitude at the piano suggests teenage insouciance, but Satie provides a running commentary in the score about a young bureaucrat’s dilemmas that ironically reflects Elio’s situation as well. According to Satie, “He is in love with a fair and most elegant lady,” but in the film we hear this music as Elio tries to ignore Oliver in the swimming pool and the camera shows us close-ups of Oliver’s swimming trunks hanging to dry in the bathtub, seemingly close enough for us to touch. Later Elio listens to the chorale “Zion hört die Wächter singen” from Bach’s cantata Wachet auf. The touch in Alessio Bax’s recording of Wilhelm Kempff’s piano transcription sounds confident and soothing, not the feelings Elio expresses in his diary about Oliver: “I was too harsh when I told him I thought he hated Bach.” This chorale celebrates the bridegroom’s arrival (“Zion hears the watchmen sing, her heart leaps for joy within her, she wakens and hastily arises”), but Elio worries about Oliver: “I thought you didn’t like me.” The musical touch contradicts the scene’s strained tension to heighten its pathos.

More often there’s a symbiotic relationship between music and touch in the film. After Oliver playfully rubs Elio’s shoulder and bids him “Later!” as he bicycles away, we hear the staccato piano and pizzicato strings of Ryuichi Sakamoto’s “M.A.Y. in the Backyard” (1996) to lend a light-hearted and humorous mood to their initial interactions. Sakamoto’s “Germination” (1983) later provides the loud and percussive piano chords that punctuate Elio’s frustration with Oliver. The “brilliant, energetic, resonant” accents and interlocking two-piano rhythms of John Adams’ Hallelujah Junction (1996) evoke Elio’s confused desires, while the soft but urgent pulsations of Adams’ Phrygian Gates (1978) convey his longing to reach out to Oliver and resolve the tension between them. In the scene at the lake, the two touch the unattached arm of an ancient statue and use it to shake hands with each other. This action matches the physicality of this musical texture: the composer writes, “I treat each hand as if it were operating in a wave-like manner, generating patterns and figurations that operate in continuous harmony with the other hand.” Voluptuously rippling arpeggios in Maurice Ravel’s “Une barque sur l’océan” from Miroirs convey the sultry summer heat and the blossoming attraction between Elio and Oliver, especially in the remarkable single-shot scene at the monument where this piano music rises and fades as they draw towards and pull away from each other in a touching “dance of desire.”

A few soundtrack songs also describe a longing to touch, especially when the characters cannot find the words or the courage to do so themselves. “Lady Lady Lady” (from Flashdance, 1983) plays as Elio gazes at Oliver sensually slow-dancing with a girl; perhaps Elio wishes for Oliver to “feel love’s gravity that pulls you to my side, where you should always be,” to “Let me touch that part of you you want me to.” The three songs by Sufjan Stevens evoke a sense of tactility as well. “Futile Devices,” a remix replacing the original guitar with resonant piano strains, recalls how “when you play guitar I listen to the strings buzz” and “the metal vibrates underneath your fingers.” “Mystery of Love,” over plucked strings, describes the communicative power of touch over vision (“Oh, to see without my eyes”), its ability to bring comfort (“Hold your hands upon my head / Till I breathe my last breath”), or equally the pain of nostalgia (“Oh, woe is me / The first time that you touched me”). With the emotionally devastating final shot, Stevens’ “Visions of Gideon” begins with the resonant piano chords and pulsating repeated notes that recall other piano works by Ravel, Adams, and Sakamoto that have played previously in the film. He sings, “For the love, for laughter, I flew up to your arms,” capturing the connection between touching and feeling that this story portrays. When we hear “I have touched you for the last time” just as the closing title appears, we might never want that feeling to end.

Ivan Raykoff is Associate Professor of Music in the interdisciplinary arts program at Eugene Lang College, The New School for Liberal Arts in New York. He is the author of Dreams of Love: Playing the Romantic Pianist.

Musician or entrepreneur? My journey began with popcorn