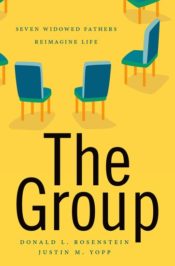 Can trauma lead to positive change? Posttraumatic growth is a phenomenon experienced by those who have undergone trauma. After facing a traumatic event, those who experience posttraumatic growth endure a period of psychological struggle before eventually finding a sense of personal growth. The process can be long and difficult, and isn’t experienced by everyone who survives a traumatic event. However, an estimated one-half to two-thirds of people show a positive change in perception following a traumatic life event. The following excerpt from The Group: Seven Widowed Fathers Reimagine Life tells the story of how Neill, a widowed father of three, began showing signs of posttraumatic growth after the death of his wife.

An old clinical pearl passed down by mental health professionals holds that patients can be the “last to know” that they are getting better. Clinicians often notice improvements in mood, energy, and outlook before the patient appreciates these changes. We saw a varia­tion of this phenomenon in the fathers. The men frequently pointed out to one another areas of progress and moments of growth even when they were unable to see similar changes in themselves.

In the months following Deanna’s death, Neill struggled to hold on to a career in the private healthcare industry that he had spent years build­ing. Traveling several nights a week for work had been manageable when Deanna was alive. However, as the sole parent of four children, Neill knew he wouldn’t be able to maintain this schedule.

Neill met with his supervisors and asked if he could reduce the num­ber of days he had to be on the road. Unfortunately, the job required a minimum amount of travel that was simply too much for him to manage and he reluctantly resigned. Neill couldn’t bring himself to conduct an extensive job search in the rapidly changing healthcare field. Instead, he reached out to a friend who needed help managing local apartment com­plexes. The job wasn’t glamorous and paid less than what Neill had been earning but it offered flexible hours, required no travel, and gave him the time he needed to care for his children.

Even as Neill began his new job, his focus remained on his family. When either of his younger children was too sick to go to school, he remained at home for the day. If he stayed up late helping his older children complete a science project or term paper, he went to work the next morning more exhausted than usual. Despite feeling physically and emotionally drained, Neill discovered something unexpected: He was growing closer to his children.

“The reality is that there’s just one parent left. Me. I’m doing the best I can and I’m just glad that my kids and I are tighter.”

He and his teenage son, Jack, were communicating better than ever. Their long and difficult conversation about the circumstances leading up to Deanna’s death had been a turning point in their relationship. Neill’s two youngest children were now physically affectionate with him in ways that they had once reserved for their mother. But the changes in his relationship with Julie surprised Neill the most. As a fifteen- year- old, she had insisted on spending the first anniversary of her mother’s death with her friends rather than with her family. Now, as a college freshman, Julie called Neill nearly every day to tell him about her classes and new friends she had made. She clearly missed her father and Neill felt great about that.

At a group meeting nearly two years after Deanna’ death, Karl asked Neill if he still felt that the wrong parent died. Neill thought for a moment before answering. “I suppose that a part of me will always feel that way. But I don’t think about it the same way now.”

“Well, lots of things. I’m around my kids so much more than I was before Deanna died. And when I’m with them, I’m really with them. My relationship with each of my children is better. I’m not saying that we don’t still have our moments but, overall, we are much closer than before.”

“So, does that mean you no longer think they ended up with the wrong parent?”

“Listen, you guys have heard me talk about how Deanna was such a fantastic mother. The kids were so attached to her and they always went to her first for everything. Now that I’m the go- to parent, that’s how they see me. So, I guess that I don’t see it as a comparison anymore. The reality is that there’s just one parent left. Me. I’m doing the best I can and I’m just glad that my kids and I are tighter.”

“I feel the same way.” Bruce replied. “My girls and I wouldn’t be as close if Lisa were still alive. It’s ironic that we feel more connected to our kids because our wives died. I never would have been the one to talk with them about all the ‘female stuff.’ Now? I’m practically an expert on periods, tam­pons, training bras, you name it. At first, I thought there was no way that I could have those conversations. But I had to and it’s changed how we communicate as a family. I desperately hate being a widower but I love that I’ve grown closer with my kids as a result.”

Neill asked Bruce, “Do you ever worry about how people will react when you say stuff like that? I don’t know, almost as if it sounds like you’re glad that Lisa died.”

“I used to worry about that, for sure. Each time I would mention some­thing being better now compared to how it used to be, I felt like I needed to begin by saying, ‘Of course, I would have given anything if Lisa hadn’t died, but… .’”

“I’ve stopped doing that, though,” Bruce added. “People get it. They understand what I’m saying. And if they don’t … well, that’s not my problem. I don’t need to apologize because some good has come from my nightmare. None of us do.”

The exchange between Neill and Bruce was an explicit acknowledgment of unexpected growth after the deaths of their wives. It represented a shift in how the men would talk with each other about their experiences. Instead of merely surviving their tragedies, they were, in some ways, growing in surprising ways. The group started sharing other stories of getting “bet­ter”: improved planning and organizational skills; newfound creativity in the kitchen; deeper empathy for others who were struggling in one way or another; the courage to audition for a church play. We explained that these were all examples of posttraumatic growth and told them about the blossoming body of research on trauma- related benefits.

In the mid- 1990s, Richard Tedeschi and Lawrence Calhoun, research psy­chologists at the University of North Carolina at Charlotte, introduced the term posttraumatic growth. In contrast to the familiar, long- established problem of post- traumatic stress disorder (PTSD), in which a traumatic event leads to physiological, mood, and behavioral symptoms, posttrau­matic growth is the process by which people adjust, adapt, and even thrive after trauma.

PTSD and posttraumatic growth may seem like two ends of the same spectrum; however, research suggests that they are separate, if still related, responses to trauma. In fact, people who endure traumatic events often experience both distress and growth simultaneously or at different times.  Researchers have identified several ways in which a person may grow following a tragedy. Neill and Bruce demonstrated perhaps the most important change: improved interpersonal relationships. People may also feel more appreciation for things they once took for granted or find that they are open to new opportunities. They may develop a deeper under­standing of their spirituality or feel stronger and more resilient than before.

Donald L. Rosenstein, MD, is Professor of Psychiatry and Medicine at the University of North Carolina at Chapel Hill where he is Director of the UNC Comprehensive Cancer Support Program and Vice-Chair of the Division of Hospital Psychiatry. He is currently the President of the American Psychosocial Oncology Society.

Justin M. Yopp, PhD, is Assistant Professor of Psychiatry at the University of North Carolina at Chapel Hill where he directs pediatric psycho-oncology consultation services within the UNC Comprehensive Cancer Support Program

Together, they are the creators of the Single Fathers Due to Cancer Program, and authors of The Group: Seven Widowed Fathers Reimagine Life.