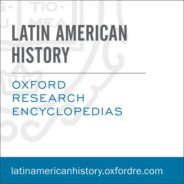 Social media has become an important way for marginalized people to organize and speak out, despite their exclusion from mainstream media. Indeed, one might wonder how protest movements could form without this tool. Yet decades before the internet was invented, young Argentines documented police brutality without iPhones, met and discussed their movement without social media, and even protested repression without marches. How? Through another of the most powerful and subversive media ever devised: rock music.

Rock musician Charly García stepped warily out of his apartment—in disguise, as usual. Some of his friends called him paranoid, but the twenty-four year old wasn’t taking any chances; he had received death threats from officers and been followed by plain-clothed policemen in dark sedans. Long hair and bell-bottomed trousers marked him and other young people as targets for harassment and arrest—or worse. Disguised this time as an old woman, García quickly bought his newspaper and hurried home.

It was early 1976, and the repression that would soon be unleashed upon the Argentine people by their government was far more horrific than anything García could have imagined. As in North America and Europe, a new spirit of anti-establishment idealism swept over the youth of Latin America in the 1960s and ’70s. But unlike countries in the north, many South American governments did not indulge the youth movements or tolerate their protests. With help from a US government panicked by the prospect of communist expansion, country after country turned to totalitarianism. Following the example of its neighbors, Argentina clamped down on civil society starting in March 1976.

Television, radio, newspapers and every form of media were affected by censorship. Rock musicians sometimes had to submit their lyrics before albums could be pressed. Every form of public assembly was banned and many clubs and social groups were disbanded—even the Boy Scouts. But having learned a lesson from the negative press that Chile’s dictatorship received, the dictators of Argentina did not publicly gun down dissenters for all the world’s media to see. Instead, they took the more subtle approach of quietly disappearing anyone suspected of “subversion” into secret concentration camps, where they were disposed of. This tactic was actually much more terrifying: Argentines lived looking over their shoulders, never knowing what word or action might cause them to be whisked away in an unofficial late night raid.

Argentine teenagers desperately needed to hear a message of hope, and to tell their own stories and share them with friends. But their need to commiserate with their peers was exacerbated by the fact that nearly every traditional forum or medium for doing so was off-limits to them. But they soon found a way, through communities built upon a new Argentine rock genre sung in Spanish. Singers like Charly García seemed to channel what young people themselves needed to say: they sang about reaching out to others, about resistance, and about run-ins with the police.  Fans roared with approval and self-identification when the young García sang in “Confesiones de invierno“: “La fianza la pagó un amigo; las heridas son del oficial” (“I got the bail money from a friend; the bruises I got from the cop”).

It soon became too dangerous to sing overtly critical songs, but musicians like Charly García and León Gieco cut their songwriting teeth on the censors’ redaction, and learned to hone their lyric-writing skills to avoid government detection. Rather than referring directly to police or the military as he did in earlier songs, García began to use metaphor to criticize them. In one famous example, “Alicia en el país,” he used Lewis Carroll’s Alice in Wonderland to parody Argentine reality. García describes a land where everything is backwards, where the innocent are proclaimed to be guilty by his majesty—not the Queen of Hearts, but a bellicose figure from a Spanish deck of cards—the “King of Swords.”

Young Argentines hungry for discussion skirted the ban on political groups by meeting in informal “listening groups” in the homes of friends, where they dissected and looked for political meaning in such enigmatic songs. Likewise they bypassed the prohibition on public assembly by gathering and finding peer companionship in rock concerts. Military officials did not at first appreciate the potential of a mass concert—with thousands of music fans who have been made politically conscious—to turn into another sort of mass meeting.

With crowds much too big to control, and musicians far too famous to make disappear, after 1980 concerts of up to 60,000 attendees became de facto political rallies. Teens went with the hope of sharing a common experience, and of hearing a political message. They often did, sometimes from the musician, and sometimes from the audience itself.  Fans would erupt in a soccer-type chant such as “Se va a acabar, se va a acabar, la dictadura military” (“It’s going to end, it’s going to end, the dictatorship is going to end”).

This reached its most dramatic point towards the end of the regime. A contemporary commentator reported that at a mass concert in Obras stadium in Buenos Aires, fans began to chant “Los desaparecidos, ¡que digan dónde están!” (“The disappeared—tell us where they are!”) Charly García danced to the rhythm of the chant for a while, then responded in Spanish, “Sing, sing… you want to sing that? Great, sing it. But no one’s going to answer you. So we’re going go on with the music. But those who are disappearing now soon won’t disappear anymore. And let me tell you: what we’ve got now will soon have to disappear.” As the crowd gave him a standing ovation, he continued: “You can have faith in that.”

Unlike most concerts we have experienced, these did not consist of thousands of individual attendees with thousands of different histories, goals, and political attitudes. These meetings were unique in the relative singularity of purpose of those attending. The fans’ anger, fear, sadness, and outrage at the regime were focused through the medium of Argentine rock music and shared back and forth from the artist to the crowd and back again. Long before the advent of social media made it possible to post political messages instantly to thousands of like-minded followers, Argentines were able to share with others through these impromptu networks of fans in listening groups and in concerts.

Dr. Timothy Wilson is a professor at the department of History at Blackburn College, and Dr. Mara Favoretto is a professor from the School of Languages and Linguistics at the University of Melbourne. Dr. Wilson and Dr. Favoretto wrote the article "Rock Nacional in Argentina during the Dictatorship" for the Oxford Research Encyclopedia of Latin American History.

Hegemonic comeback in Mexico? The victory of López Obrador