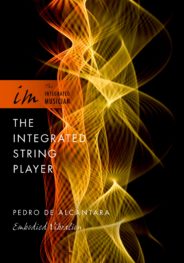 Three existential questions are useful to all of us: “Who am I? Where do I come from? Where am I going?” The publication of The Integrated String Player got me thinking about these questions in regards to my trajectory as a cellist. I decided to go back to school, so to speak. This is my report.

When I was a child growing up in Brazil, my first cello teacher was Cecilia Zwarg. She had emigrated from Germany to São Paulo to be the principal cellist of the São Paulo Philharmonic, long defunct. By the time I met her, she had retired from performing and lived modestly in a small house not far from my childhood home. Mrs. Zwarg had been a student of Hugo Becker (1863-1941), a prominent performer and pedagogue who had been a student of Friedrich Grützmacher (1832-1903) and Alfredo Piatti (1822-1901). Let’s say I started my cello training in the “German school.”

This is how it goes:

Continuity, heritage, transmission, propagation: It doesn’t matter how diffuse Grützmacher’s heritage is by the time it reaches me. Symbolically, it gives me a faint claim of ancestry. Grützmacher was my cellistic great-grandfather, so to speak. I enjoyed practicing his Études in my youth, even though back then I wasn’t aware of my faint link to the old fellow.

After four years with Mrs. Zwarg, I changed teachers and spent a year studying with Thomas Lanz, a German-Brazilian who, though trained as a cellist, made his living as an economist. Lanz had studied in the Paris Conservatory with André Navarra (1911-1988), thereby giving me a claim to have studied “in the French school.” Navarra had studied at the Paris Conservatory with Jules-Léopold Loeb (1852-1933), who has now fallen into obscurity. But it doesn’t matter how obscure my French great-grandfather is; he’s still family.

My next teacher was Watson Clis, who was my first connection with an autochthonous tradition—I mean, a locally developed music tradition that we might informally call “the Brazilian school.” Clis had been a student of Iberê Gomes Grosso (1905-1983), who once studied with Pablo Casals (1876-1973) in Paris. My cello, which I have owned since 1977, used to belong to Gomes Grosso. I have no idea how deep Gomes Grosso’s studies with Casals were—days, weeks, months, years?—but that isn’t going to stop me from claiming a little connection with the great man.

And then I entered “the American school,” personified in Leonard Rose (1918-1994). I never did study with Mr. Rose, whom I heard in concert once in my adolescence. But my next three teachers were his students and devotees: Barney Lehrer, Robert Gardner, and Daniel Morganstern. Barney Lehrer had also studied with Paul Tortelier (1914-1990), giving me another claim to have studied in the “French school.” And Daniel Morganstern, though a dedicated follower of Rose, also studied with Luigi Silva (1903-1961), giving me a toehold in the “Italian school.”

This exercise in genealogy is great fun, which is already a good reason to do it. More important, it allows you to find your place in the grid of interconnected relationships going back decades and centuries. If you really think about it, it’s amazing to be “part of humanity,” and to receive indirectly the gifts and insights of teachers you’ve never met.

On the Internet, you can find out many things about your forebears with just a few clicks. Reading up on Leonard Rose (the teacher of three of my teachers), I learned that he had been a student of his older cousin, Frank Miller (1912-1986), who was the principal cellist of the NBC Orchestra under Arturo Toscanini. I suddenly remembered that, in my youth, I had attended a wedding somewhere in the Wisconsin countryside; at that time, I had a girlfriend who hailed from those parts. None other than Frank Miller played at the wedding ceremony. Not that I remember how he sounded—we’re talking about a fading memory of a fleeting moment of 35 years ago—but the fact of having been in the presence of the cellistic forefather of one of my cellistic forefathers is, for me, interesting and meaningful. YouTube has multiple clips of Leonard Rose, and of Frank Miller as well. According to the Internet, Rose studied with Miller for a few months; he studied more substantially with Felix Salmond (1888-1952), an Englishman who had premiered Elgar’s Cello Concerto back in 1919. YouTube has audio clips of Salmond, playing at a time when you and I weren’t alive yet. Indeed, not even our parents where alive yet, and Salmond was already making his mark in the world!

My next teacher was Aldo Parisot, a Brazilian like myself. In his childhood, he studied with his stepfather, Tomazzo Babini, in a regional capital that at that time was (more or less) in the middle of nowhere. As Napoleon once said, “Geography is destiny.” To put it differently, your personality is partly shaped by the land where you grow up. Paris and the-middle-of-nowhere are very different environments! Mr. Parisot’s Brazilianity inflected his teaching and his music making in subtle ways. He was an individualist with a pioneering streak, his own man through and through. I’d say my two years with him at Yale University amounted to a second term at “the Brazilian school.”

My last teacher was William Pleeth, who gave me a taste of “the English school” when I lived in London. Pleeth was trained in the German tradition, but I think his temperament, his life experiences, and his outlook made him as English as cucumber sandwiches.

Who am I? Where do I come from, and where am I going? I’m a stereotypical Gemini with two personalities: I’m a student of the “internationalist school,” and I’m a graduate of the “no school.” I excelled in one of the schools and got kicked out of the other one, but I won’t tell you which is which! A musician’s journey includes piecemeal music education, wide-ranging travels, and creative explorations into an organic whole.

Featured image: “Violin” by Steve Snodgrass. CC by 2.0 via Flickr.

Pedro de Alcantara is a musician, writer, and teacher, leading workshops worldwide on creativity and health. His books include Integrated Practice: Coordination, Rhythm & Sound and Indirect Procedures: A Musician's Guide to the Alexander Technique. He lives in Paris and is Visiting Professor at the Royal Conservatoire of Scotland.