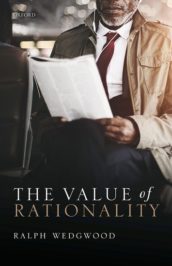 The Value of Rationality

Rationality is a widely discussed term. Economists and other social scientists routinely talk about rational agents making rational choices in light of their rational expectations. It’s also common in philosophy, especially in those areas that are concerned with understanding and evaluating human thinking, actions, and institutions. But what exactly is rationality? In the past, most philosophers assumed that the central notion of rationality is a normative or evaluative concept: to think rationally is to think ‘properly’ or ‘well’—in other words, to think as one ‘should’ think. Rational thinking is in a sense good thinking, while irrational thinking is bad. Recently, however, philosophers have raised several objections to that assumption.

First of all, how can it be true that you should never think irrationally, if you sometimes can’t help it?

And finally, rationality requires that our mental states (in other words, our beliefs, choices, and attitudes in general) are consistent and coherent. But why is that important, and what is so good about it?

Having considered these three arguments, we can now debate which side is right. Does thinking ‘rationally’ mean thinking ‘well‘ and ‘properly’, or not? However, looking at both sides of the issue, it becomes evident that we still need considerable philosophical arguments and analysis before we can arrive at any conclusion. The reason why is because the problem itself is not clearly defined, since we don’t know the meaning of some of the key terms. Therefore, as a next step in the analysis, we will review some recent work in linguistics, specifically semantics.

Most linguists believe that the key terms—’should’, ‘can’, ‘good’, ‘well’, and so on—are context-sensitive: the meaning of the word depends on the context. For example, ‘can’ sometimes expresses the concept of what a particular person has an ability to do (as when the optician asks, “Can you read the letters on the screen?”). At other times, it expresses the concept of what is possible in a more general sense (as when we say, “Accidents can happen”).


Rationality, in the end, is the feature of your mind that guides you—ideally (if you’re lucky) towards the goal of getting things right.

The same sort of differentiation may help with the second and third objections. The meaning of terms like ‘good’, ‘well’, and ‘properly’ changes in different circumstances. Think about the scenario in which you would be punished for thinking rationally, and rewarded for doing the opposite. In one sense of good, it is good in this case to think irrationally, but in another sense, it remains good for you to think rationally, because rational thinking in itself is always good.

Instead of answering our questions, however, this line of argument raises more, because what we need to do now is define this sense of ‘good’, in which rational thinking is always ‘good.’ But here is a proposal about how to answer these further questions. When you have a belief, or when you choose a course of action, you have a goal—the goal of getting things right. After all, it would be absurd and nonsensical to say, “I know that this is the right thing to believe, but why should I believe it?” To get things right, your beliefs and choices must fit with the external world.

Featured image credit: Photograph of a boy in front of a chess landscape by Positive Images. Public domain via Pixabay.

Ralph Wedgwood is a Professor of Philosophy at University of Southern California. He is the author of The Value of Rationality, The Nature of Normativity, and around fifty articles in various volumes and philosophy journals.