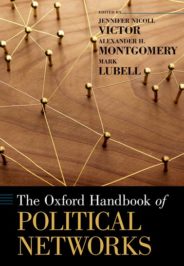 The Oxford Handbook of Political Networks

Modern politics seems very ego-centric. It’s common and rational to focus attention on particular individuals, or individual leaders, and puzzle over their actions. For several decades, the social scientific approach to politics also focused on individuals as the unit of interest to explain outcomes and behaviors. However, our ability to offer explanations about puzzling phenomena in politics is limited when our eye remains trained on the individual. Expanding our understanding of contemporary puzzles requires a change in our perspective.

On the other hand, if we’re not talking about politics with respect to a particular personality, we tend to talk about politics in terms of relationships and networks. It’s a part of everyday parlance to say that something happened in politics because of who you know, who one’s connections are, or who is connection to whom. Whether it’s late night talk show hosts, news anchors, pundits, or commentators, there is a natural inclination to talk about relationships in politics. Sometimes the relationships are nefarious, insinuating, or about rallying support. Whatever the context, the natural inclination to talk about politics in terms of how people and institutions are related infects both the common and academic discourse.

Since the middle of the 20th century, political scientists and policy analysts have focused on individuals to explain what happens in politics. The dominant intellectual paradigm in political science was primarily borrowed from economics. In this framework, individuals make choices in the face of constraints imposed by institutions. This approach is very logical in the study of politics since political actors–including voters, elected officials, media, advocates, and others–seek to achieve objectives while facing obstacles. The study of how individuals face these objectives and make their choices to produce political outcomes has been a fruitful lens to study politics through for some time.

Whether it’s late night talk show hosts, news anchors, pundits, or commentators, there is a natural inclination to talk about relationships in politics.

A second example is the study of the relationship between democracy and the tendency of countries to go to war. Until a few years ago the so-called “democratic peace” theorized that democracies are less likely to engage in conflicts than other forms of government. This explanation faced empirical challenges that could not be overcome when studying conflicts at the level of individual or pairs of countries. A social network perspective on the question of democratic peace shows that to understand the relationship between a country’s form of government and its tendency to engage in conflict requires an understanding of that country’s position in the world, relative to all other countries.

Insights like this are abundant in the modern political networks literature. They emphasize the need and the value of using a relational perspective to study how and why things happen in the political world. If we remain focused on individuals, we run the risk of missing an entire set of contexts that may enlighten the questions over which we’re most puzzled.

It is no accident that the renaissance of understanding politics in social context is happening at the same time as an explosion in data availability and computational power. In contrast to traditional data-driven strategies in the social sciences, network oriented-data tends to be boundless. In traditional statistics, where the power and leverage of causal inference is dependent on quality sampling, such strategies are often not available in studies of networks. Mathematically, sampling from a network is problematic. Therefore, the traditional strategies of engaging in causal inference are compromised in network studies. However, personal laptop computers now have the memory and computational capacity to handle many gigabytes, or more, of data. In some ways, our data and computational capacity has grown faster than our theoretical knowledge about how networks work. We now have access to more data than we ever have before. Now more than ever we require the theories and methods necessary for understanding the interdependencies in our social and political world.

Individuals are consequential, but politics is about relationships. If we eschew a social perspective on politics because it is inconvenient or difficult, we are likely to misunderstand or misconstrue what we observe in the world. The idea that networks are a consequential component of our social lives is apparent in everyday life, and is increasingly a part of how we understand decision making by citizens, policy makers, and leaders. It’s an exciting time to be alive and watch the world transform its understanding of human behavior and interaction in real time through social media, and to simultaneously incorporate this knowledge into scholarship that explains and reflects our society. Meaningful contributions have already been made, but we are only at the beginning of drawing on this paradigm to advance our understanding of ourselves.

Jennifer Nicoll Victor is an associate professor of political science at Schar School of Policy and Government at George Mason University. She is the co-author of Bridging the Information Gap: Legislative Member Organizations in the United States and the European Union (University of Michigan Press, 2013). She is a co-founding contributor to "Mischiefs of Faction" published on Vox.com, and formerly served in the US Senate as an American Political Science Association Congressional Fellow. She is one of the editors of The Oxford Handbook of Political Networks.