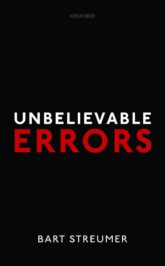 Unbelievable Errors: An Error Theory about All Normative Judgements

Few philosophical theories are so hard to believe that no philosopher has ever defended them. But at least one theory is.

You may take this to be a problem for the theory. But I do not think it is. Just as a theory can be true if we do not believe it, a theory can also be true if we cannot believe it. Of course, if we cannot believe a theory, we cannot sincerely say that it is true. But we can defend the theory without saying that it is true: we can put forward arguments against the alternatives to the theory and say that these arguments together seem to show that the theory is true. As long as we do not say that these arguments actually show this, we are not insincere. Moreover, if we did need to be insincere in order to defend this error theory, that would not be a problem for the theory. It would merely be problem for us.

So is this error theory true? Since I cannot believe the theory, I do not think it is. But I do think that the arguments against the alternatives to the theory together seem to show that the theory is true. And I think that our inability to believe an error theory about all normative judgements may explain why the philosophical debate about the nature of these judgements has been going on for so long without reaching a consensus: because we have been circling around a truth that we cannot believe.