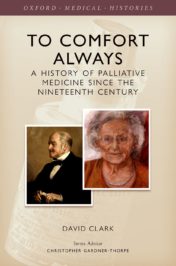 To Comfort Always: A History of Palliative Medicine Since the Nineteenth Century

Around the world access to pain relief and to palliative care services is emerging as a growing public health issue. In many countries getting appropriate pain relieving drugs for those with advanced disease is constrained by overly-zealous laws and procedures. Likewise the provision of palliative care education, research and delivery, although making some headway and achieving policy recognition in places, is still extremely limited, often where the need is greatest. In such a context of halting progress, the recent report from the Lancet Commission on Pain and Palliative Care is most welcome.

I was fortunate to be asked to join some 61 co-authors from 25 countries to assist in the Commission, though the bulk of the activity was driven forward by a small group of people who played major roles in the research and writing. I believe they have brought something new to the table that merits serous attention. Let’s first put it in context.

If there has been any tendency to self-congratulate over all this, the Commission’s report sweeps it aside in a chilling blast of new data, ambitious recommendations and an emotive call to action.

The report is a stark description of the obdurate problems that remain and the massive injustices that prevail around the world when it comes to pain relief and palliative care. But with that the authors bring new approaches and recommendations. Likewise, if the Commission’s report is lengthy and detailed, nevertheless, passion and a commitment to change leap off every page.

This report does four things:

We know already that most palliative care capital and resources are concentrated in the rich countries. But where the need for palliative care is greatest, the level of provision, if it exists at all, is often patchy and quite incommensurate with what is required by way of response. In his comment on the report, Lancet editor Richard Horton puts it unambiguously: ‘The Commission has uncovered an appalling oversight in global health. It is time for that oversight to be remedied’.

My sense is that we have gone to a different level with the Commission’s report. Its analysis is compelling. It will rally support and engagement. It rightly calls for more and better research to support its implementation. In the coming weeks and months we will see how other communities of interest respond, particularly palliative care specialists. The report is not only a manifesto for action; it is also a strategic intervention that will no doubt provoke wider debate and commentary.

This post was originally published on the University of Glasgow’s End of Life Studies blog on 13 October 2017.

Professor David Clark is a Wellcome Trust Investigator at the University of Glasgow. He founded the International Observatory on End of Life Care at Lancaster University in 2003 and has wide ranging interests in the history and global development of palliative care. He is the author of To Comfort Always: A History of Palliative Medicine Since the Nineteenth Century (OUP, 2016).