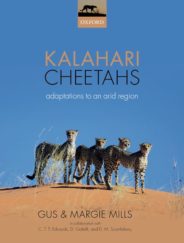 Today, 4 December, is International Cheetah Day! Cheetahs are easily distinguished from other cats due to their distinctive black “tear stain” markings that create two lines from eye to mouth, their black spots on tawny fur, and black rings at the end of their long tails. Cheetahs also stand apart from other large cats due to their loose and rangy frame, small head, high‐set eyes, and slightly flattened ears.

Cheetahs are one of the fastest animals on the planet. Known for their high speeds and ability to chase down fast prey, cheetahs first stalk prey using a concealed approach, followed by a full sprint starting from about 30m (33yd) away. An average chase will last between 20–60 seconds, and covers a distance of 170m (183yd). Due to stamina restrictions, cheetahs cannot continue a chase for more than about 500m (550yd), which is why hunts tend to fail if there is a large initial starting gap between cheetah and prey. About 50% of cheetah chases result in a successful capture of their prey.

In honor of International Cheetah Day and the ongoing cheetah conservation efforts, we’ve put together a quiz to let you test your cheetah knowledge. Take the quiz below, and find out how much you actually know about these fast felines!