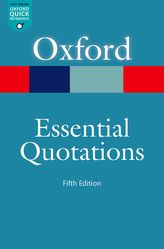 Oxford Essential Quotations ensures coverage of the most popular and widely-used quotations by combining use of the largest ongoing language research programme in the world, the Oxford English Corpus, with the acclaimed text of the Oxford Dictionary of Quotations.

The seemingly simple task of asking ‘who said what’ has perhaps never been more difficult. In the digital age, quotations can be moved around, attributed, questioned, re-appropriated, and repeated in the blink of an eye. If someone is ‘widely quoted’ as saying something and it sounds more or less right, many people take this to be sufficient proof of the quotation’s origin. With this tacit approval, misquotations spread even further, in an ever-increasing pattern of misattribution and acceptance. With more data available than ever before (instantly available at the click of a mouse), such issues are ironically a result of more information – not less! Hesketh Pearson, author of Common Misquotations, wryly commented:

“Misquotation is, in fact, the pride and privilege of the learned. A widely-read man never quotes accurately, for the rather obvious reason that he has read too widely.”

Certain figures can also ‘attract’ quotations more than others; Abraham Lincoln, Maya Angelou, Oscar Wilde, and Groucho Marx being just some of the main victims (or victors) of misattribution. As James McNeill Whistler once amusingly wrote:

Oscar Wilde:  How I wish I had said that.
Whistler:  You will, Oscar, you will.

With this in mind, we thought it was a good time to test your knowledge of commonly misquoted phrases. Do you know who said what?

Susan Ratcliffe is an Associate Editor for Oxford Quotations Dictionaries. Her publications include Oxford Essential Quotations, the Little Oxford Dictionary of Quotations, and the Oxford Treasury of Sayings and Quotations.

Oxford Essential Quotations is the ideal place to answer all your quotation questions. Discover which of over 3,000 authors said that tantalising phrase, or search over 600 subjects to find an apt quotation for any occasion. Find out more on Oxford Reference.