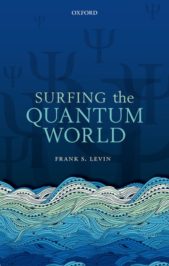 At the beginning of the 19th century, Thomas Young proved that light was a wave phenomenon. He did so by illuminating a screen (in an otherwise darkened room) with a beam of sunlight that had passed through a card with two slits in it. The proof was the interference pattern on the screen, whose alternating light and dark portions could only have occurred if light consisted of waves, not particles.

The wave paradigm was firmly grounded some 60 years later by James Clerk Maxwell’s theory of electromagnetic radiation, of which light is one component.

Maxwell’s theory formed an unchallenged scientific consensus until 1900, when Max Planck invoked particles he called “quanta” to explain blackbody radiation. Five years later, Albert Einstein extended Planck’s quantum concept to explain the photoelectric effect, wherein electromagnetic radiation incident on a metal ejects electrons from it. The wave theory utterly failed to explain the results of this phenomenon, whereas Einstein did so by hypothesizing that electromagnetic radiation consisted of quanta (now called photons).

Given the consensus concerning the wave paradigm, efforts were made to disprove Einstein’s hypothesis. None succeeded, whereas in 1923 Arthur Compton verified it! This only made the situation worse, since particles and waves are totally different entities, so how could electromagnetic radiation be both?

To understand how this can be, note first that concepts such as particles and waves arise from our visual environment, and are not intrinsic to the quantum world, even though they are used in describing aspects of it. Assigning such concepts from the results of experiments is unavoidable, since the language we use is derived from our visual environment. This means that in the quantum world, walking and quacking like a duck needn’t mean that it’s a duck! A quantum object—a “quanject”—is something distinct from either a particle or a wave: quanjects are entities that can behave like a particle or a wave but are neither.

In addition, to describe radiation phenomena involving photons, one must use quantum theory, in particular its probabilistic character. That character is embodied in quantities known as amplitudes, denoted here by A. How amplitudes are obtained is not important for this discussion. What is important is that A2 (the square of A) is the probability for something in the quantum world to occur, for example, that an electron in the hydrogen atom will be at a particular location or that a photon will pass through a slit and strike a screen.

If sunlight passes through a single slit and strikes a screen, no interference pattern is seen, which makes the light seem to consist of particles. It’s the presence of the second slit that produces the interference pattern, which makes light seem to consist of waves. Quantum theory distinguishes between these two circumstances via its amplitudes.

With a single slit there is only one straight-line path that can be followed to reach any point on the screen, for which there is a single amplitude. With two slits, labeled 1 and 2, not only is there an amplitude for each, say A1 and A2, quantum theory states that the total amplitude A is equal to the sum of the two: A = A1 + A2. The probability for reaching a point on the screen is the square of A, i.e., A2 = (A1 + A2)2 = A12 + A22 + 2A1A2, as long as the amplitudes can be treated as ordinary numbers, and even when they can’t, an expression much like the preceding one occurs, so there is no loss of generality in using it.

It’s the presence of the term 2A1A2 that gives rise to the interference pattern, in perfect analogy to what occurs in the electromagnetic-wave description. However, if one of the two slits is either covered or has a detector placed on its far side, then the path would be known, the two-term amplitude would reduce to a single term (either A1 or A2), and no interference pattern would occur. In other words, when the path through one of the two slits is determined, the photons behave like particles, when it is undetermined, the photons behave like waves.

Suppose a two-slit experiment is performed with single photons or electrons. Because probability is involved, the position on the screen where the single quanject would hit is random. It might therefore be thought that performing the single-quanject experiment a huge number of times would not produce an interference pattern. In fact, it does!

Such experiments have been done with various projectiles, e.g., electrons. How the interference pattern gets built up is seen in the accompanying image. Of the five frames shown, (a) resulted from just 100 electrons incident, while (e) shows an interference pattern emerging after “only” 70,000 electrons were incident. This is a truly amazing result. Why? Because 70,000 photons are so many fewer than those emitted per second from the sun or a 100 watt bulb: e.g., if all the bulb’s photons were in the blue portion of the visible spectrum, approximately 2×1020 would be emitted per second!

With both slits open, the amplitude for a single photon is A = A1 + A2. This does more than allow for the photon to follow either path: it suggests that the photon can pass through both slits at the same time, in effect interfering with itself! If that seems like science fiction, it is not: experiments have been done showing that a single photon—also a cesium atom—can be in two different places at the same time.

Equally striking, experiments done with a Mach-Zehnder interferometer have shown how individual photons, sent sequentially through it, can be forced to behave as waves, or as particles, or as both!

The quantum world is exceedingly strange and wonderful to contemplate.

Frank Levin is an Emeritus Professor of Physics at Brown University. His main activity since retiring has been teaching adult-education courses on science for persons with neither a math nor a science background. An outgrowth of one of them is his 2017 popular science book Surfing the Quantum World (Oxford University Press).