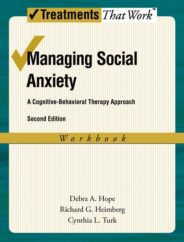 During the festive period from Christmas to New Year, we can often find ourselves in situations that we are uncomfortable with, making conversations with people we don’t know, and sometimes struggling with social anxiety. In the following extract from Managing Social Anxiety, Workbook, the authors explore cognitive restructuring, and how it can be useful to prepare ourselves for uncomfortable social situations.

Alejandro is very anxious about the upcoming office Christmas party. He dreads going every year but believes that it is important to go because the boss seems to make a mental note of who does and does not attend. Although Alejandro usually becomes very anxious talking with people, he gets along OK at work because the conversations seem to have a purpose and are generally about work-related topics. People listen to him because they are exchanging information that they both need. When anticipating the party, Alejandro imagines himself standing in a group of people totally silent. He has some ideas about what he could say but he does not know how to break in. He may laugh along with the jokes but he does not really participate in the conversation. The situation feels hopelessly awkward and Alejandro says to himself, “I’m not very good at making conversation. Other people seem to know how to take their turns and the conversation flows back and forth.”

Let’s look at Alejandro’s AT (anxious thought) of “I’m not very good at making conversation.” First we will examine the thinking errors in Alejandro’s AT.

Labeling: Alejandro is labeling himself a “poor conversationalist” (or more honestly, perhaps, “too stupid to know how to talk to people”). He seems to see himself as fitting into a category of people that have a serious flaw—not knowing how to make conversation.

Let’s look at some cognitive restructuring that Alejandro might do for himself.

Coping Alejandro: What evidence do you have that you are not very good at making conversations?

Anxious Alejandro: I am always miserable at these Christmas parties and usually end up standing off by myself or sticking very close to my wife all evening.

Coping Alejandro: Is there any other reason—besides a lack of social skills—that you could feel miserable at the Christmas party?

“I’m not very good at making conversation. Other people seem to know how to take their turns and the conversation flows back and forth.”

Anxious Alejandro: I’m embarrassed about what people will think if I am standing off by myself but my wife worries about me if I hang around her all night.

Coping Alejandro: It sounds like your thought about your social skills is only one of the ATs that might be making you feel miserable at the party. I’m wondering if you are feeling so miserable that you do not actually attempt to talk with very many people.

Anxious Alejandro: I usually try a few times. I start a conversation, then after a few exchanges, the person does not seem to have much to say so I excuse myself and move on, feeling like I failed.

Coping Alejandro: Are there any other possible reasons, besides your lack of social skills that the other person might not continue to talk?

Anxious Alejandro: I guess some of them might be shy and not have much to say. Maybe they see someone they want to talk with. Some people try to use these parties to make points with their supervisor or the big boss by chatting with them.

Coping Alejandro: So it sounds like some people might cut the conversation short for reasons that have nothing to do with you.

Anxious Alejandro: Yes, I guess that is true. It takes two people to have a conversation. If they don’t stick around, there isn’t much I can do.

Coping Alejandro: You’re right. It does take two people to have a conversation. What percentage of the conversation are you responsible for?

As with many people with social anxiety, Alejandro did not have much evidence of the terrible social skills he thought he possessed. There were several reasons why he might be feeling uncomfortable at the party, including worrying about what his wife and other people thought of him. Also, he had been putting a lot of pressure on himself to carry the conversation. It is important to remember that if the other person does not want to talk, there is not much you can do about it. A good rational response for him might be, “I only have to do my half” or “I’m only responsible for 50% of the conversation.” If he is less worried about keeping the conversation going, Alejandro should be able to be more spontaneous and better able to think of things to say.

Debra A. Hope is a Professor of Psychology at the University of Nebraska-Lincoln, Lincoln, Nebraska, USA. Richard G. Heimberg is the Director of the Adult Anxiety Clinic at Temple University, Philadelphia, Pennsylvania, USA. Cynthia L. Turk is a Professor of Psychology at Washburn University, Topeka, Kansas, USA. Debra, Richard, and Cynthia are authors of Managing Social Anxiety, Workbook.