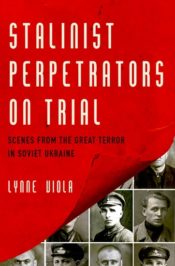 Stalinist Perpetrators on Trial: Scenes from the Great Terror in Soviet Ukraine

Between the summer of 1937 and November 1938, the Stalinist regime arrested over 1.5 million people for “counterrevolutionary” and “anti-soviet” activity and either summarily executed or exiled them to the Gulag. This was Stalin’s “Great Terror” and, contrary to popular belief, the largest number of victims were not elites or “Old Bolsheviks,” but common people, mainly peasants and a range of non-Russian suspect ethnicities, many of them also peasants. The following timeline captures the key events of the Great Terror in Soviet Ukraine.

Lynne Viola is Professor of History at the University of Toronto. She is the author of The Unknown Gulag: The Lost World of Stalin's Special Settlements, Peasant Rebels Under Stalin, The Best Sons of the Fatherland, co-editor of Russian Peasant Women, and editor/co-editor of six other books. She is the author of Stalinist Perpetrators on Trial: Scenes from the Great Terror in Soviet Ukraine.