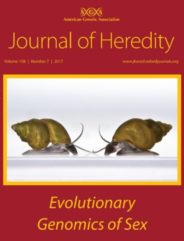 Established in 1903, Journal of Heredity covers organismal genetics across a wide range of disciplines and taxa. Articles include such rapidly advancing fields as conservation genetics of endangered species, population structure and phylogeography, molecular evolution and speciation, molecular genetics of disease resistance in plants and animals, genetic biodiversity and relevant computer programs.

Over the last 100 years, the Journal of Heredity has established and maintained a tradition of scholarly excellence in the publication of genetics research. Virtually every major figure in the field has contributed to the journal.

Pangolins, or scale-bodied anteaters, are a unique lineage of mammals exclusively feeding on ants and termites. Eight species are distributed across Africa and Asia. They all show extraordinary adaptation to myrmecophagy (specialized diet of ants and termites), including a scaled armor covering the body and tail that protects them from bites (both from bugs and large predators!), powerful arms and claws to rip anthills and termite mounds open, toothless jaws, and a long, sticky tongue that can reach 70 cm in the largest species (the giant pangolin).

Much can be learnt from the etymology of animal names. The genus name Manis, often applied to all the species of pangolins, comes from the Latin manes meaning “ghost” or “spirit of the dead” in Roman mythology. It echoes the nocturnal and secretive way of life of pangolins, but also their uncommon, scaly appearance. The common name “pangolin” is derived from the Malay word “Peng-guling”, meaning “the roller” as the animal curls into a ball when threatened. Sadly, this trait is a reflection of the pangolins’ easy-to-catch nature, predestining them to heavy exploitation by humans.

Pangolins have traditionally been highly-valued for their meat –considered a delicacy– and the purported healing properties of their scales. An anonymous article published in 1938 in Nature details customary pangolin use in Asia: “Dried scales are roasted, ashed, cooked in oil, butter, vinegar, boy’s urine, or roasted with earth or oyster-shells, to cure excessive nervousness and hysterical crying in children, women possessed by devils and ogres, malarial fever and deafness”. Many of these practices continue, including the use of pangolin scales as aphrodisiacs and to cure maladies such as toxicosis, scabies, inflammation, rheumatisms, asthma, poor blood circulation, and more recently, breast cancer.

Pangolins are easy-to-catch, highly sensitive to habitat degradation and have low reproduction rates; as such, they are one of the mammalian groups most prone to extinction. They are currently considered to be the most trafficked mammals and are often portrayed as the flagship species of the illegal wildlife–or bushmeat–trade. During the last several decades they have been literally “eaten to extinction” because of an unsustainable demand from large urban centers. For example, the Chinese traditional medicine market consumes over 135,000 tons of pangolins annually.  Recent seizures in Hong Kong and China suggest that as Asian pangolins become more scarce, traffickers are increasingly focusing on African populations using some of the same criminal networks that were set up for the ivory trade.

As a consequence, all eight species of pangolins have been raised to vulnerable, endangered, or critically endangered status on the IUCN Red List and have been moved to Appendix I of the Convention on the International Trade in Endangered Species of Wild Fauna and Flora (CITES) in 2016, thus receiving full international trade ban.

Documenting and controlling the pangolin trade is complicated by the elusive criminal networks that feed the market and the variety of forms through which pangolins are traded, including smoked carcasses, chopped meat, scales and scale powder, paws and embryo soups. Moreover, our lack of knowledge of pangolin evolutionary and natural history complicate attempts to assess the impact of pangolin trade and to develop tools and knowledge to design comprehensive management plans.

In 2005, when I started to study pangolins at the Institut de Recherche pour le Développement (IRD), the high number of animals sold on African bushmeat markets was a shock and motivated me to develop a genetic framework and complete pangolin phylogeny that could address many unanswered questions including what species of pangolin are sold, and where do they come from? Together with collaborators from eight countries, a worldwide initiative was launched to obtain samples from these secretive species with most of the samples provided by the bushmeat markets. The list was completed by assessing museum specimens and their degraded–but useful–DNA, as was the case with the small population of Palawan pangolins.

Our ultimate objective in this initiative was to revise classical pangolin taxonomic boundaries using a comprehensive phylogenetic framework and to identify the most suitable genetic markers and tools for the molecular tracking of the worldwide pangolin trade.

Combining mitogenomic and nuclear gene datasets, we first estimated that extant pangolins represented an ancient mammalian lineage of Upper Eocene origin that split into Asian and African lineages before the Oligocene-Miocene boundary.

Our taxonomic analyses based on genetic and morphological data revealed (i) a new subfamily of small African pangolins, the Phatagininae and (ii) an important level of cryptic (previously undetected) diversity within the African common pangolin, the most common species in the African tropics, suggesting that new species of pangolins remain to be described.

Importantly, we set up a new generation of molecular tools (markers) that will improve our ability to trace the worldwide pangolin trade. These markers included full mitogenomes, which are ‘super markers’ providing > 5,000 diagnostic sites among pangolins’ species and lineages. We also designed more traditional and affordable approaches that targeted diagnostic portions of specific genes, both from the mitochondrial and the nuclear genome.

By generating thousands of diagnostic sites across the mitochondrial and nuclear genomes our study provides an unprecedented resource with which to efficiently track the worldwide pangolin trade. To date, only a few studies have used genetic tools to explore the geographic structure of pangolins and trace their seizures. Our results will facilitate more in-depth analyses of geographic subdivisions in the pangolins’ ranges and will help monitor pangolin trade worldwide, providing crucial information to local and global conservation and wildlife trade groups. By better understanding the history and incredible diversity among pangolins, we hope to help save pangolins from extinction, before it is too late.

Philippe Gaubert is a staff researcher at Institut de Recherche pour le Développement (IRD), France, studying the evolution and biogeography of Ferae (Carnivores and Pangolins) and their conservation genetics.

Agostinho Antunes is a Professor at the University of Porto, Portugal and the Head of the Evolutionary Genomics and Bioinformatics Group at the Interdisciplinary Centre of Marine and Environmental Research (CIIMAR), having broad interests in genomics, evolution, and conservation genetics of endangered animals.

Warren E. Jonhson is a conservation geneticist and evolutionary biologist at the Smithsonian Conservation Biology Institute focusing on applied wildlife ecology and comparative genomics with a specific interest in organisms with strong biomedical or veterinary component.

Shu-Jin Luo is a Senior Principal Investigator at the School of Life Sciences and the Peking-Tsinghua Joint Center for Life Sciences at the Peking University, China investigating mammalian diversity, adaptation and evolution via molecular genomic tools.

Philippe, Agostinho, Warren, and Shu-Jin are all contributors to “The complete phylogeny of pangolins: scaling up resources for the molecular tracing of the most trafficked mammals on Earth”, recently published in Journal of Heridity.

From Darwin to DNA: evolution, genomics, and conservation of the Galapagos giant tortoises