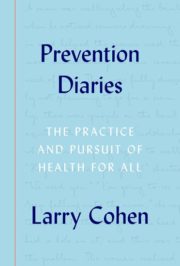 Prevention Diaries: The Practice and Pursuit of Health for All

Every day the news is flooded with stories of different types of violence. On what seems like a daily basis, we’re bombarded with relentless reports of violence in this country. Our register of national tragedies keeps growing: hate crimes, mass shootings, and #Metoo headlines are only the most recent outbreaks of an epidemic of violence in our homes, public spaces, and communities.

It’s easy to feel overwhelmed in an environment where violence takes so many forms, adversely affecting public health in both clear and complex ways. But we’re not helpless. We don’t have to keep living—and dying—like this, leaving our children a legacy of trauma. We have the power to change.

Violence doesn’t occur in a vacuum. It’s often a result of a systematic wearing down of communities, families, and individuals by adverse circumstances. Over my decades-long career in public health, I’ve worked with communities across the country to understand and address the causes of violence. I’ve learned a lot from people working to prevent gun violence, domestic violence, and violence affecting youth.

Promote a cycle of health, reduce the cycle of violence.

Health and safety are closely connected. For violence prevention strategies to be successful, promoting health is essential. Just as risk factors for violence may be shared across multiple forms of violence, we know that promoting resilience insulates people from violence. Education, strong social networks, and norms that support healthy relationships all protect against violence. People need access to jobs and education, as well as a sense of feeling safe and welcome in their environment to walk in their neighborhood, engage with their neighbors, or let their children ride bicycles in local parks. Those who are safe in their environments are more likely to have strong social networks, get enough physical activity, and consume healthier foods – whether by growing vegetables in an outdoor garden or walking or taking the bus to markets that sell healthy food.

Homicide in South Los Angeles, as in many urban areas across the United States, is one of the leading causes of premature death. “Parks After Dark” launched in 2010 as a prevention strategy of Los Angeles County’s Gang Violence Reduction Initiative. Three participating parks offered extended evening hours to welcome members of the community to interact in well-lit, supervised parks. Parks After Dark also promoted health by organizing sports teams and exercise programs; providing classes on healthy cooking, literacy, juvenile justice, and parenting and computer skills; and offering arts and crafts, free concerts and movie screenings, and access to health and social service resources. The program has since expanded with the support of community groups and the city’s Department of Public Health. The result? Violent crimes in the communities surrounding the original three parks declined 32% during summer months from 2009 to 2013. In nearby communities that did not participate in Parks After Dark, violent crime increased 18% during this same time period. According to surveys, 97% of people who joined Parks After Dark reported feeling safe.

These kinds of strategies have great potential to save lives and transform communities. Violence isn’t inevitable. By investing in what we know works, we can take meaningful action to prevent violence.

Larry Cohen is founder and executive director of Prevention Institute. A leading authority in developing practical prevention strategies for communities, Cohen's work includes catalyzing the nation's first multi-city no-smoking laws; helping define violence as a public health issue and working with the UNITY City Network to prevent violence; advancing chronic disease prevention through physical activity and healthy eating; and promoting better understanding of the underlying causes of illness, injury, and health inequities. His work has been recognized by the US Department of Health and Human Services, American Cancer Society, Centers for Disease Control and Prevention, American Public Health Association, and Society for Public Health Education. He lives in Oakland, California.

He is also the author of Prevention Diaries: The Practice and Pursuit of Health for All, available in print and online from Oxford University Press.

How much do you know about opioids? [quiz]