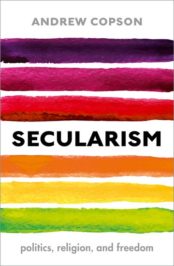 What is secularism? In the following extract from Secularism: Politics, Religion, and Freedom, Andrew Copson breaks down 3 different parts of the definition of secularism, its history, and how its meaning has developed over time.

A good provisional modern definition is that adopted by the contemporary French scholar of secularism Jean Baubérot. He sees secularism as made up of three parts:

• Freedom of thought, conscience, and religion for all, with everyone free to change their beliefs and manifest their beliefs within the limits of public order and the rights of others

• No state discrimination against anyone on grounds of their religion or non-religious world view, with everyone receiving equal treatment on these grounds

‘Separation of church and state’ first became a constitutional feature of some Western countries in the eighteenth century, but the separation of religious institutions from state ones had also been a feature of societies elsewhere, and at other times in history. In the twentieth century, many states in Asia and Africa also constitutionally declared this separation, following the Western models and their own traditions. Today, separation is seen by many as the modern and democratic ideal. In some states it is formal and official, expressed in constitutions and laws; in others it is not official but is a practical reality in the way that governments operate. Separation is not uncontroversial. It is opposed by those who think that the state should share their own religious identity and have that identity as its foundation. It is also opposed by those who think that making the state non-religious disadvantages religious people in some way and is unfair.

The background to the development of modern separation in Europe was a struggle for power between churches and governments. Far more commonly today, the avowed motive for separation is to give equality of citizenship to all people of all different beliefs and to avoid alienating them by declaring a state religion they don’t share. Outside Europe many states still see religion and religious institutions as their rivals for power and for the loyalty of citizens. These states often regulate and control religious institutions as a result, and this too is a rejection of separation, or at least a denial that separation must entail non-interference.

Today, separation is seen by many as the modern and democratic ideal.

Freedom of thought, conscience, and religion

This freedom has been a feature of a number of societies and legal regimes in history but was first elaborated as a legal right in the modern West. It evolved from the official policies of religious toleration that developed in the Netherlands and elsewhere in Europe as a way of recognizing an individual’s conscience. It was in the guise of ‘religious freedom’ that it first became a legal right and under that name it is still a cherished part of US political culture in particular. Since the advent of formal universal human rights in the 1940s, it is now recognized as freedom of ‘religion or belief ’, where the word ‘belief’ includes non-religious world views, and as being itself part of a wider freedom of thought and conscience.

According to the United Nations Human Rights Committee in 1993, the right to this freedom:

The Human Rights Committee also agrees with Baubérot’s observation, however, that in some limited circumstances, it can be acceptable to restrict this freedom. They say that the right to have a religion or belief is protected ‘unconditionally’ and ‘no one can be compelled to reveal his thoughts or adherence to a religion or belief’, but that the right to act in accordance with your religion or belief may be subject to some limitations if they are ‘prescribed by law and are necessary to protect public safety, order, health or morals, or the fundamental rights and freedoms of others.’

Equal treatment on grounds of religion or non-religious world view

Beyond simply protecting the freedom of people to hold and manifest their beliefs, the secular state envisaged by Baubérot goes further and guarantees equal treatment to all on grounds of their religion or non-religious world view. This idea was formalized more recently than the first two aspects of secularism. Internationally, it is set out in the 1981 Declaration on the Elimination of All Forms of Intolerance and of Discrimination Based on Religion or Belief by the United Nations General Assembly. This said, ‘No one shall be subject to discrimination by any State, institution, group of persons, or person on grounds of religion or other beliefs.’ The Declaration called on all states to ‘take effective measures to prevent and eliminate discrimination on the grounds of religion or belief in the recognition, exercise and enjoyment of human rights and fundamental freedoms in all fields of civil, economic, political, social and cultural life.’

Featured image credit: The intersection of Church and State by Chris Phan. CC-BY-2.0 via Flickr.

He is also the author of Secularism: Politics, Religion, and Freedom, which was published in September 2017 by Oxford University Press. He writes widely across the media and appears often in broadcast media representing a humanist point of view.