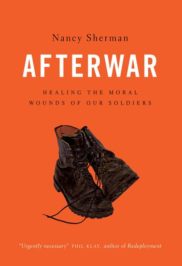 Afterwar: Healing the Moral Wounds of Our Soldiers

On this Veterans Day, we honor those fallen and herald those still fighting. We also examine what more can be done in terms of listening and understanding those who have seen the perils of war firsthand. In this excerpt from AfterWar: Healing the Moral Wounds of our Soldiers, author Nancy Sherman shares with us her time spent with a veteran of Afghanistan and his feelings on those who expect so much from soldiers and can only offer thanks in return.

At a civilian-veteran gathering in Washington D.C. in early summer of 2012, a young vet came forward, turned to a civilian he hadn’t met before, and said: “Don’t just tell me ‘Thank you for your service.’ First say, ‘Please.’” The remark was polemical and just what was meant was vague. But the resentment expressed was unmistakable. You couldn’t be a civilian in that room and not feel the sting. The remark broke the ice and the dialogue began.

I brought a Marine vet with me that evening who had just finished his freshman year at Georgetown. He wasn’t the vet who spoke those words, but he shared some of the anger.

At twenty-two years of age, T. M. (“TM”) Gibbons-Neff served as a rifleman in charge of an eight-man team in a second deployment to Afghanistan. His unit was among the first to arrive in Afghanistan in December 2009 as part of President Obama’s surge that would send 30,000 additional U.S. troops to try to turn around the course of the eight-year-old stagnating war. Like many of those troops, TM was posted to the southwest of the country, to the violent southern Helmand Province.

On the evening of day one of the first mission, on the edge of a Taliban-held village, TM and two other teammates were crouched down on the highest rooftop they could find, surveying the nooks and crannies where the insur­gents could hide and arm. They had their scopes on several who looked suspi­cious, but they drew no fire and so just kept to their lookouts. Then, it got “sporty,” says TM, in his measured way, with lightning rounds and pops coming in from three different directions. Two rounds hit the arms of his buddy, Matt Tooker, just as he stood up to launch a grenade; another rico­cheted off the body armor of his light gunner, Matt Bostrom, leaving severe chest wounds. Less than 24 hours into the mission, and TM was already down two out of his eight men. The game plan had totally shifted: he had been the observer and now he was the primary shooter, and needed to find another observer. By the end of the day he was squarely in the role of “strate­gic corporal,” the apt term coined by retired Marine Commandant General Charles Krulak for a low guy on the noncommissioned totem pole, typically in a remote and dangerous outpost, away from direct supervision, having to implement quick tactical and moral decisions with far-reaching strategic implications. For TM, resuscitating the mission all-consumed him. Even the thought that he had two friends who had just got badly wounded barely sur­faced. He was operating in “code red.” Not even the most subliminal, sweet thoughts of home and his girlfriend darted through his mind.

In due course the losses sunk in. And more losses piled on. A year and a half later, Matt Tooker, shot that night, was killed in a motorcycle crash back home. TM is pretty sure it was the culmination of risky, suicidal behav­ior: with a maimed arm, he could no longer hold the sniper role that had come to define him. Two other close friends were killed in action in Afghanistan in May 2010. TM’s Marine career had begun with his father’s death (a Vietnam War Navy veteran), just days after TM had arrived at boot camp. “I’m no stranger to people I know getting ripped out of my life pretty quickly,” he says, at twenty-four, with a war weariness that doesn’t easily match his boyish looks and small frame. The names of his three fallen best buddies are engraved on a black bracelet he wears on his right wrist. It is his own memorial, a place to remember his buddies by touch, the way visitors run their fingers over the names on the Vietnam Wall.

TM has done his share of grieving and visiting team members at Walter Reed Hospital who weren’t as lucky as he. Still, the grief and the visits fuel a deep sadness about what he thinks of as the futility of some of his missions in Afghanistan. When he first got to Georgetown University, the loose politi­cal banter on the social media sites about the need to intervene in various conflict areas around the world—Libya, Iran, Syria—riled him. It was hard to watch his peers beating the war drums while fully insulated from the con­sequences of deployments. The media- and philanthropy-backed campaign against the Ugandan warlord Joseph Kony and his abduction of children as soldiers in his Lord’s Resistance Army (launched through the popular YouTube video “Kony 2012”) made him especially resentful of his classmates’ sense of comfortable entitlement. His own losses were still fresh. He didn’t want to see more: “You know, a thing like Kony . . ., and all these people say­ing, ‘We should do more. What are we going to do about it?’ You’re not going to go over there! . . . That will be our job, and then more of my friends will get buried, and then you guys can talk about it on Facebook. That’s what upsets me. . . . The politics. The policy. The rant. . . . Oh, you want to go over there and stop Kony. Hey, you YouTube watcher: Is this going to be you?. . .”

TM did not hit the Send button on any of the Facebook replies he com­posed. Instead, he went on to write about his war experience—for the New York Times war blog, the Washington Post, Time, the Atlantic, the Nation, and other war blogs. He has served as executive editor of Georgetown’s stu­dent newspaper, The Hoya. A year or so after we met, he took a seminar I taught on war ethics, and helped create in that class a remarkable civilian– veteran dialogue. And he has done that on campus, too, serving as the head of the campus student veteran association. He is processing his war publicly and reflectively in writing and community outreach. But his early feelings of resentment, like those of the veteran who turned to the civilian that night, are important to hear and important to try to understand.

Those feelings are, in part, resentment at too easy a beating of the war drums by civilians safe from battle, infused with militarism at a distance.

Nancy Sherman, University Professor at Georgetown and Guggenheim Fellow (2013-2014) served as the Inaugural Distinguished Chair in Ethics at the United States Naval Academy. A philosopher with research training in psychoanalysis, she lectures worldwide on moral injury, the emotions, resilience, and military ethics. She is the author of Stoic Warriors, and Afterwar.

Is the American special education system failing children with autism?