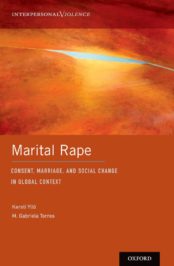 This year’s meeting of the American Society of Criminology will look at how our understanding of crime and violence has changed in the 50 years since President Lyndon Johnson’s Commission on Law Enforcement and Administration of Justice. When thinking about  societal change, 50 years can be both a long time and no time at all, in the grand scheme of things. It is important to note that in the Commission’s original document there was no mention of gender violence, sexual assault, sexual harassment, or marital rape. These are violations that have always been a part of human history, but it is only within recent decades that the women and men who are victims of these crimes are being heard, and are being empowered to seek justice against the perpetrators of these crimes.

Sexual violence in marriage has a history as long as the institution of marriage itself. But for millennia, marital rape – like other forms of sexual assault – was considered a private trouble not a public issue. Early rape laws defined the assault as a property crime against the husband or father whose wife or daughter was “defiled.” Under this framework marital rape was an oxymoron since a wife was legally a husband’s sexual property. When 17th century rape laws – from British common law to the Qing dynasty in China (Ng, 1987) – sanctioned rape, it was considered a violation of a woman’s chastity; again, not possible in the context of marriage. Further, British jurist Lord Matthew Hale in 1736 addressed the issue of consent directly by declaring that “The husband cannot be guilty of a rape committed by himself upon his lawful wife, for by their mutual consent and contract the wife hath given up herself in this kind unto her husband, which she cannot retract” (Hale, 1736).

This ideology of permanent, irrevocable consent pervaded legal and cultural conceptualizations of marriage and forced sex within it. And this ideology has global resonance, not because people on many continents were influenced by Lord Hale, but because control of women’s bodies through marriage is foundational to patriarchy. Until 1993, rape laws across the US included a “spousal exemption” that specifically excluded husbands from rape prosecution.

The power relations that contextualize rape are critical, and the ways in which marital rape is currently legally condoned varies globally. In the US, for example, forced sex in marriage is illegal, yet numerous attitudinal surveys show that Americans regard the rape of a wife as far less serious than a similar assault on an acquaintance or stranger. Further, marital rape is rarely prosecuted and almost always as an additional charge along with other violence, including murder. In India, the Supreme Court ruled in February 2015 that marital rape was not a criminal offense. A government minister then told the Parliament that marital rape could not be criminalized in India as “marriages are sacrosanct” in that country.

This ideology has global resonance, not because people on many continents were influenced by Lord Hale, but because control of women’s bodies through marriage is foundational to patriarchy.

There is tremendous variation cross-culturally in whether rape by a husband is regarded as a criminal violation, just an “unfortunate reality”, or an “unquestioned wifely duty.” Regardless of traditional context, however, attitudes are shifting in all cultures. At this point in the 21st century, there are three significant trends that are changing attitudes toward marital rape. First, the idea that women’s rights are human rights is no longer a radical or fringe perspective. International human rights organizations are now recognizing abuse in the private sphere as a rights violation. In fact, sexual violence in marriage has been successfully used as grounds for seeking asylum in the US and Canada.

The second current trend that brings marital rape to the forefront is the global HIV/AIDS pandemic. Research documents that large numbers of women, particularly in sub-Saharan Africa, have been infected by their husbands. The lack of ability to deny sex – or even ask for sex with a condom – can be life threatening for women and their children. Public health policy and practice is increasingly cognizant of the damage marital rape does.

A third trend that is changing the way people think about marital rape is the global transformation of marriage as an institution. The traditional model of marriage as a contract between families for the purpose of reproduction is giving way to companionate marriage based on intimacy – albeit unevenly and despite resistance. The idea that marriage is a relationship between two people based on romantic love validates the conceptualization of the wife as a distinct, autonomous being – an individual with bodily integrity. This change from reproduction to intimacy as the central purpose of marriage represents a tectonic shift in heterosexual relations.

Changes in attitudes and accompanying transformations of policy vary enormously worldwide. However, emerging research from places ranging from Vietnam to South Africa, to Guatemala to the US is revealing a powerful commonality. Regardless of law and cultural attitudes, women who experience sexual assault by their intimate partners describe significant physical, emotional, and social suffering. But now, women’s voices are being heard. As one American woman explained, “somebody brought up the question of marital rape and I was still way too brainwashed and I was like,…what are you talking about? I was his wife. He could do whatever he wanted with me…It took me a long time to realize that I had the right to say no, and that if I didn’t have that right nothing was a real yes.” A woman from Vietnam confided to a researcher about forced sex in her marriage: “For such a long time I couldn’t (reject him), after resisting it wasn’t effective. So, I think I have to accept it, or allow it, so that I can sleep, and then the next day I can work. Many times I think that this is the duty of a wife, so I just accept it and don’t tell anyone. But sometimes I think that this is sexual abuse.” Women across the world struggle with the emotional impact of forced sex, feelings of fear, degradation and anger, as well as significant health consequences. They describe forced pregnancies, HIV infection, cuts, bruises and torn rectums. They describe social suffering in the context of their extended families and community.

But, marital rape is finally coming out from behind closed doors.

Efforts to respond are growing in local communities as well as international organizations. The expansion of criminal justice and public health interventions in sexual violence is important. What we need to remember is that these will be most successful when built on a deeper understanding of complex cultural contexts and women’s lived experience.

Kersti Yllö, is Professor of Sociology at Wheaton College (MA), where she held the Henrietta Jennings Chair for Outstanding Teaching, and was a Fulbright Senior Specialist in Estonia. She has done research on domestic violence for nearly four decades and has published numerous articles and books including License to Rape: the Sexual Abuse of Wives (with David Finkelhor). She is the co-editor along with M. Gabriela Torres of Marital Rape: Consent, Marriage, and Social Change in Global Context.