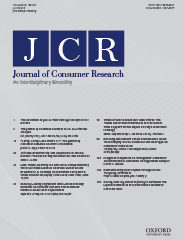 Founded in 1974, the Journal of Consumer Research publishes scholarly research that describes and explains consumer behavior. Empirical, theoretical, and methodological articles spanning fields such as psychology, marketing, sociology, economics, communications, and anthropology are featured in this interdisciplinary journal. The primary thrust of JCR is academic, rather than managerial, with topics ranging from micro-level processes (such as brand choice) to more macro-level issues (such as the development of materialistic values).

John Pierre, a renowned pastry chef, is making a new batch of chocolate. Not paying attention, he leaves the chocolate in the oven for an extra five minutes by mistake, resulting in the chocolate having a different taste than he had intended. In light of this chef’s mistake, how interested are you in buying this chocolate?

Companies, in general, hesitate to release mistakes, much less advertise them to consumers as a unique product. John Pierre’s first instinct, in this case, may be to throw the chocolate away and whip up a new batch before customers come in for the day seeking his award-winning creations. But what if John Pierre viewed this mistake as a way to attract consumers? Would they, in fact, line up to purchase his “made by mistake” creation? Findings suggest the answer is yes.

Imagine, now, that a mistake did not result in a delicious new batch of chocolate, but a tainted product. Would consumers still prefer a product made by mistake even when the mistake made the product worse? In a recent study, consumers viewed a work of art that contained a mark that took away from its aesthetic quality. However, when the detracted artwork was framed as having been made by mistake (the artist accidentally marked the artwork by dropping his pen on it) versus intentionally (the artist decided to add the mark with his pen), consumers were more likely to purchase the artwork made by mistake—and were willing to pay more for it.

We value products made by mistake because they seem more unique, but does that higher desire to purchase translate across all product categories? Would learning that a heart monitor or household appliance was made by mistake increase its appeal? How does the product category impact the desire to own or use a “made by mistake” version of the product? Indeed consumers were found to prefer products made by mistake in product domains in which uniqueness is valued (i.e., hedonic products, like art, food, and music) but not in domains in which uniqueness is less central (i.e., utilitarian products, which are products purchased for their practical uses).

Mistakes are typically viewed negatively, however, learning that a product was “made by mistake” attracts consumers because it enhances perceptions of the product’s uniqueness. While companies might fear that advertising their mistakes could be costly, we suggest that it would be a mistake not to do so.

Taly Reich is an assistant professor of Marketing at the Yale School of Management. Her research interests fall at the intersection of behavioral decision theory and social psychology. She has published articles in leading journals such as Nature, the Journal of Consumer Research and the Journal of Personality and Social Psychology. Daniella Kupor is an assistant professor of marketing at Boston University. Her research interests are in the areas of decision making and consumer persuasion. She has published both in leading marketing as well as psychology journals. Rosanna K. Smith is an assistant professor of Marketing at the University of Georgia. Her research explores how beliefs about the nature of the creative process influence perceptions of authenticity and value. Her work has been published in both top marketing and psychology journals.

They are the authors of the article Made by Mistake: When Mistakes Increase Product Preference.