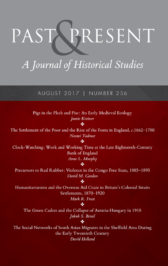 Founded in 1952, Past & Present is widely acknowledged to be the liveliest and most stimulating historical journal in the English-speaking world. The journal offers:

In the public imagination the inter-war period is today characterised as a period of economic, moral and political collapse among European nations. Crippling economic depression, ethnic ultra-nationalism, fascism, eugenics, anti-Semitism and racism are all closely and inseparably linked with the years between 1918 and 1939. Working-class Britons of the period have been characterised as having enthusiastically fed on a regular diet of Empire Day pageantry and jingoism which fostered among them a deep hostility to anything, or anyone, considered to be alien. A combination of chauvinism, competition for jobs and even psychosexual inadequacy have all been posited as underlying causes for white working-class antagonism to non-white migrants in their midst. The port riots of 1919-1920 between anti-immigrant mobs and non-white seafarers are a case in point. Indeed, the attitude of the British working classes toward non-whites during these inter-war years has often been gauged by these events.

However, as a historian of non-white immigration to Britain in the early twentieth century – the period when the British Empire was at its fullest extent and its propaganda penetrated deepest – I have studied evidence to suggest that there is another, strikingly different, story to tell. It suggests that numerous white working-class natives – those who came into regular contact with men who had arrived from Britain’s colonies in search of work – had not swallowed the racial justifications for empire. Moreover, newcomers and natives were, for the most part, willing and able to rub along quite tolerably with each other, often forming lasting and positive relationships.

My research into ‘mixed marriages’ in Britain during the early twentieth century – specifically those where one partner had a Muslim name – shows their widespread distribution across the country. As one would expect for a migration primarily originating among seafarers, concentrations of such couples existed in deep-water ports such as London, Cardiff, South Shields and Liverpool. However, clusters of marriages were also located in towns and cities across Britain, many of which are inland. George Orwell and J.B. Priestley noticed Asian migrants in British cities, although neither appeared able to properly comprehend their presence. Priestley, in his travelogue and social commentary English Journey, described the children of unions between natives and newcomers, disparagingly referring to their parents as ‘the riff-raff of the stokeholds and the slatterns of the slums…’

My research, focused on the Yorkshire steel-making city of Sheffield (summarised in my recent Past and Present article ‘The Social Networks of South Asian Migrants in the Sheffield Area During the Early Twentieth Century’), used records of marriages, births and deaths, electoral registers, census returns, local press reports, family testimony and working-class memoirs as its evidence base. It shows early arrivals of Muslim South Asians from the First World War onwards. Some, such as Ayaht Khan, Noor Mohammed and Ali Amidulla, settled down and raised families with their white working-class wives (also see my blog post The Afghan queen, the Sheffield steelworker’s daughter, and a more ‘sanguine’ approach to migration history). The men worked in heavy industry or as door-to-door pedlars and street hawkers. In the 1930s, they were joined by Sikh men similarly employed in peddling as well as in the building trades.

“Many migrants are presented not as alien interlopers, but as remarkably embedded within the life of their neighbourhoods.”

What is common for most of the migrants located by my study is that a substantial proportion of them formed relationships with white working-class natives who played significant roles in the newcomers’ lives. Natives appear in records and testimony as wives, in-laws, workmates, friends, co-lodgers, and neighbours to the migrant men. Native in-laws and workmates provided them with accommodation, as did families running general lodging houses. Natives witnessed marriages and supported couples when they found themselves in difficulties, such as when the authorities harassed them with spurious challenges to their British subject status. In short, many migrants are presented not as alien interlopers, but as remarkably embedded within the life of their neighbourhoods.

Most significantly, native-newcomer households aided new arrivals in Britain – often kinsmen of the husband – providing them with lodging and cultural orientation. They helped them find work and introduced them to the broader native-newcomer social network. Native-newcomer households also acted as anchor points for chains of kinship migration between India and Britain. This process, whereby mixed couples acted as agents of ongoing migration, was replicated in individual households across the country. When considered in aggregate, it made a significant, possibly vital, contribution to successful migration and settlement. Mixed households acted as nodes on social networks that sustained flows of migrants to Britain throughout the inter-war period, the Second World War and into the Windrush era of mass New Commonwealth immigration. In the testimony of pioneer migrants, a great many acknowledge the mixed households into which they were welcomed upon their arrival in Britain.

Unfortunately, this is a largely overlooked aspect of Britain’s story of immigration and settlement by the peoples of its empire. This may be due to a tendency to view British society as monolithic in its support for imperialism and in its attitudes to racial and ethnic difference during the first half of the twentieth century. As migration historian Laura Tabili has pointed out, this view has stressed ‘barriers between rather than dialogue among’ the people of Britain and ‘has isolated migrants analytically from British society and history.’ While state archives may offer us valuable insights into the thoughts and deeds of British imperialism, they tell us precious little about the situation on the ground. In order to look beyond such a monolithic view of British society we must look elsewhere for insights into the everyday lives of ordinary Britons. The records of marriages and births are one particularly rich source illuminating some of the experience of native-newcomer relationships during the inter-war period. Further research into such relationships would aid a more rounded understanding of the period, its complexities and paradoxes, and help fill the gap in our understanding of how ordinary Britons responded to perceived racial difference at a time when the empire was at its fullest extent.

David Holland is a PhD student in the Department of History at the University of Sheffield and is currently completing his thesis. He is in receipt of a Wolfson Foundation for the Arts and Humanities scholarship.  David is also the author of "The Social Network of South Asian Migrants in the Sheffield Area During the Twentieth Century" an article published in Past & Present.