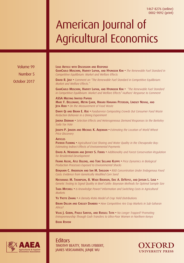 Food waste has become a major cause for concern in the United States. Or at least, that’s what some prominent organizations suggest. The Food and Agriculture Organization (FAO) of the United Nations estimates that the United States wastes 103 million tons of food. This number suggests the United States squanders lots of food and concerns about food insecurity continue to rise.

The statistics suggest that food waste is a problem, but how do these organizations calculate them? And what, exactly, is food waste?  When organizations attempt to monetize the value of the waste, what price do they use? And once they arrive at an appropriate number, what can be done? These questions greatly affect whether food waste represents a policy priority or not.

To understand the difficulties in calculating the extent and cost of food waste, it is useful to begin with recognizing the steps involved from farm to table.

The final product sold to consumers goes through a number of processing, transformation, transportation, and distribution stages before ending up on someone’s plate. To oversimplify a bit, someone first grows the food which she then sells to processors. Retailers buy from the processors. Finally, consumers purchase the food from retailers.

The estimates from FAO overestimate the extent and cost of food waste. First, the definition used by the FAO identifies food waste as the “discarding or alternative (nonfood) use of food that is safe and nutritious for human consumption along the entire food supply chain.”

The problem with this approach is that recovered food is not necessarily wasted food, yet it is still included in the definition. Recovered food may become fertilizer or animal feed. If this happens, there is no waste. What was once a possible future meal for a human has become an input to another productive process. It may have ended up in the stomach of an  animal that ends up on another plate later.  Should discarded food that is still used and does not end up in the landfill be defined as “waste”?

Second, calculating the cost of waste depends on the price used. Conventional measures rely on retail prices—the price paid at the end of the process. This makes sense for food that ends up for consumption, but not for food at earlier stages of the production process. Retail prices are higher than the prices growers receive. By only using the highest prices, the estimated monetary loss is much greater than if the relevant prices at each stage were used.

This approach has some shortcomings. First, the prices used to measure food waste do not include externalities. Landfill waste emits CO2 and methane, both of which contributes to climate change. Second, they ignore the opportunity cost of using land as a landfill as well as the transportation costs associated with hauling food waste. A fuller measure would include these costs but the major organizations that calculate the value of waste do not account for these costs.

The appropriate policy response depends on the nature of the problem. For example, developed countries have better infrastructure and technology than developing countries. These affect the amount of food waste likely to occur during the early stages of the productive processes. Farmers with better technology and opportunities to move their products along to the next stage are more likely to have less waste. In developing countries, social norms play a larger role in limiting food waste. A culture that values the efficient use of resources given the importance of food as a share of household budgets generates little waste. Similarly, the proximity of the grower and consumer—in developing countries, they are often the same person—provides powerful incentives for minimal waste. Also, as the available opportunities to utilize food for other purposes increases for growers or processors they reduce waste.

Marc Bellemare is an Associate Professor in the Department of Applied Economics and Director of the Center for International Food and Agricultural Policy at the University of Minnesota. Bellemare has had his worked published in multiple journals and has been quoted as an expert source in publications such as The Wall Street Journal and The New York Times.

Metin Çakir is an Assistant Professor at the University of Minnesota whose research focuses on the areas of industrial organization and food marketing. Hikaru Hanawa Peterson is a Professor at the University of Minnesota centers around behavioral and consumer economics. Lindsay Novak and Jeta Rudi were both doctoral students during the time of this research.

They are the authors of the article "On the Measurement of Food Waste."