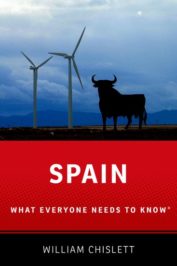 Spain: What Everyone Needs to Know®

Spain is living through sad times. The Catalan parliament’s illegal proclamation of an independent state has sparked the most serious constitutional crisis since the failed coup in 1981. But unlike that crisis, this one has no easy solution. All the stereotypes that Spaniards are incapable of living together, epitomised by the 1936-39 Civil War, are being reinforced.

The central government in Madrid responded to the unilateral declaration, which followed the unconstitutional referendum on independence on 1 October, by imposing direct rule as of 27 October and calling a snap election in Catalonia on 21 December.

Some 2.3 million people voted in the referendum (43% of the electorate), defying police batons and rubber bullets in images that shocked the world, 90% of them in favour of independence. Human Rights Watch condemned the excessive use of force by the police.

Madrid has suspended the Catalan parliament and taken over ministries and the regional police force, while Carles Puigdemont, the deposed Catalan president, was ordered to appear before a court in Madrid on charges of rebellion, sedition, and misuse of public funds.

Catalonia, which like other Spanish regions has enjoyed autonomy since 1978, plays a key role in the Spanish economy. The region’s population of 7.5 million (16% of the total) generates around one-fifth of Spain’s GDP, one quarter of total exports, and received 18 million of the 75.3 million tourists last year. Its GDP is larger than Portugal’s.

The pro-independence parties, an unholy alliance of conservative nationalists, left wing radicals, and anti-capitalists, have 72 of the 135 seats in the Catalan parliament (47.8% of the votes cast in the 2015 election).

Polls show them narrowly gaining control of the parliament again, making the central government’s strategy of calling an election a risky one. If this happens, these same parties will claim a new mandate for independence.

Madrid is hoping that the unionist parties—the ruling Popular Party, the Socialists, and the centrist Ciudadanos—will galvanize the so-called “silent majority” against independence into voting on a larger scale than previously.

There is no doubt that the referendum was illegal. Something very different is whether it was legitimate. It violated Spanish law, UN resolutions on the right to self-determination, the recommendations of the Council of Europe’s Venice Commission, an agency of reference on constitutional matters and referendums, and Catalonia’s own regional charter, the Estatut.

Only Spain’s national parliament and the central government have the power to call referendums. The Constitution is based on the indissoluble unity of the Spanish nation.

In essence, the train crash between Madrid and Barcelona is a collision between Catalan self-determination and Spanish state sovereignty, between the supremacy of Spanish law and laws passed by the Catalan parliament.

How did we get here? Very simplistically, the turning point came in 2010 when Constitutional Court ruled there was no legal basis to recognise Catalonia as a nation and that the Catalan language should not take precedence over Castilian Spanish, among other things. This followed a challenge by the Popular Party, then in the opposition, to the new Catalan autonomy statute which was approved in 2006 in a referendum in the region and ratified in the Congress and Senate in Madrid.

This situation was aggravated during Spain’s 2008-2013 recession as it fed the grievance that Catalonia was paying a disproportionate amount to the Spanish coffers and not receiving enough in return.

Tensions came to a head in June 2011 when protesters over the economic crisis surrounded the Catalan parliament, forcing ministers to reach the building by helicopter. As of then, the cause of independence took off. Before then, it was unusual for more than 20% of Catalans to support independence. Support for secession reached a peak of 49% in 2013.

Not only was the referendum illegal, but it came after a series of claims made by separatists that are demonstrably false. For instance, it is not true—and European treaties reflect this and endless assertions by the European Commission—that an independent Catalonia would automatically stay in the EU and the euro zone. Nor it is true that voting is an exercise in democracy in all cases (dictatorships also organise referendums, as happened during the regime of General Franco, Spain’s dictator between 1939 and 1975). Nor are comparisons with Scotland valid. Scotland’s referendum on independence in 2014 was an agreed process and Catalonia’s unilateralist.

Companies based in Catalonia have taken fright at the crisis. More than 1,800 companies and banks, including some big names such as CaixaBank, Spain’s third largest bank, and the cava producer Codorníu have already voted with their feet and moved their legal headquarters out of Catalonia.

The crisis has put King Felipe VI in an awkward position. The tone he struck in his televised address to the nation was more that of spokesman of the central government than head of state. He had a great opportunity to speak of the enriching nature of unity and diversity, and missed it. His father, King Juan Carlos, faced down the 1981 coup, ordering the plotters to surrender.

A recent poll shows that Catalans support for a solution of Spanish constitutional reform and more self-government is around 70%. Some kind of political compromise will be required to encourage the significant proportion of the Catalan population in favour of independence to be comfortable within the Spanish state. The problem can no longer be left to the courts.

But the two sides are at the moment so entrenched that a dialogue is a non-starter; furthermore, there are divisions in the ranks of the secessionists. A lot is hanging on the upcoming election.

William Chislett, the author of Spain: What Everyone Needs to Know, is a writer who has lived in Madrid since 1986. He covered Spain’s transition to democracy (1975-78) for The Times of London and was later the Mexico correspondent for the Financial Times (1978-84). He writes about Spain for the Elcano Royal Institute, which has published four books of his on the country.