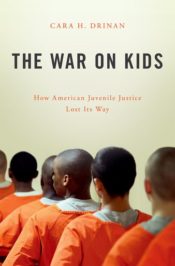 The War on Kids: How American Juvenile Justice Lost Its Way

In America today, adolescents are frequently moved from juvenile court to adult criminal court where they can be sentenced with little regard for their age or circumstance. In these adult correctional facilities, they can be exposed to high rates of physical and sexual assault from other inmates or end up held in solitary confinement.

In the following excerpt from The War on Kids: How American Juvenile Justice Lost Its Way, we follow author Cara Drinan as she travels prior to the 2012 presidential election, to visit the first of many of these young inmates whom she would come to know during her research.

I met Terrence on a muggy August morning at the Taylor Correctional Institution (TCI) in Perry, Florida. Perry is about a two- and-a-half hour drive west from Jacksonville on the edge of Florida’s panhandle. Despite its nearly deserted Main Street and depressed feel, Perry is less than ten miles from the Gulf of Mexico and only one hour from the state’s capital. The town has approximately 7,000 residents; the prison can hold nearly 3,000 inmates. TCI employs more than 550 staff members, and a quarter of the town’s residents live below the poverty line. Perry is a prison town, and a Confederate flag greets its visitors.

Months of research had brought me to Perry. As a law professor whose scholarship focuses on criminal justice reform, I’d become espe­cially interested in juvenile justice in 2010. That year, the United States Supreme Court had considered the case of Terrence Jamar Graham, who, at 17, had been sentenced to life without parole for his involvement in an attempted robbery of a barbeque restaurant. The Supreme Court, in Graham v. Florida, held that life without parole sentences for juveniles who commit non- homicide offenses are cruel and unusual— that they violate the Eighth Amendment. As a result, Terrence was entitled to a new sentencing hearing and ultimately received a 25-year sentence.

After months of researching and writing about the Graham case, I had decided that I needed to meet the young man at the center of the Court’s decision. I asked Terrence’s lawyer, Bryan Gowdy, who had successfully argued Terrence’s case before the Supreme Court, if I could do so.

Like a good lawyer, mindful of his client’s autonomy, Bryan told me to “ask Terrence.” Terrence and I exchanged letters; he agreed to meet me; the Florida Department of Corrections allowed me to schedule a visit; and several months later, my visit day had arrived.

The night before my scheduled visit, I had landed in Jacksonville and driven to Perry, wanting to be on time for my 9 a.m. slot the next day. Thirty minutes outside Jacksonville the landscape grew sparse. I shifted back and forth between radio static and a half-audible talk radio host ranting about President Barack Obama. With the 2012 presidential campaign at fever pitch, the host declared that Clinton had been our first black president and that Obama was our first gay president because he supported the “gay Gestapo.”

I reached Perry at dusk. As I wound along a narrow residential road heading into the center of town, I was struck by the beauty of its huge oak trees and dangling Spanish moss. At the same time, two images from that short stretch have stayed with me. First: a man coming out of a trailer home, picking up a small dog by the neck in a terribly cruel manner. I looked away, fearing what was to come. Second: a closed-down store that advertised “gun alternatives.” This was a town that had seen more prosperous days.

After a fitful night’s sleep at the Perry Holiday Inn Express, I woke early and drove the short distance to the prison. TCI comprises three separate facilities, and I visited them all before reaching the right one. Walking toward the gates of each facility, I was conscious of the men who were already out and about working in the prison yard under the merciless sun and the supervision of guards. The inmates were black; the guards were white. It had rained the night before, so everything was damp, and with the growing heat, a mist rose from the concrete. The air smelled like the coat of a wet dog.

Before beginning the security process, I left all valuables in my car— cash, laptop, phone. I was allowed to bring in my audio recorder, a pad of paper, and a pen. The metal detector beeped loudly at me. After several passes, I suggested to the skeptical- looking guard that my underwire bra might be causing the problem. I took off my light suit jacket at his instruction and stood there awkwardly in my bra and tank top. He waved the wand over me again. “Yup. It’s the bra,” he said. As I hurriedly got my jacket back on, he looked at me sternly and said: “keep the jacket on.”

The guard led me to the interview room and handed me a small, cigarette-pack-shaped alarm. There was a single button on it. He said to me casually: “call if you need me; press the alarm to call for more people if there’s an incident.” He didn’t describe what would constitute an incident. The “interview room” was closer to a storage closet than a room. Approximately three feet by five feet with a door on each side, strangely, the room had a sink on one wall. Someone had set up a scratched, shaky card table with two folding chairs. I was led into the space through one door (that was left open), and the door opposite me was open, as well. I was told that Terrence would be brought in through the opposite door. Where was he coming from? What would he look like? Would the guard escorting him be polite? Was I being recorded? My mind raced as I set up my recorder and waited for Terrence to arrive. The room was dirty.

My pre-interview jitters disappeared when Terrence was led into the room. He was my height, trim, and well groomed. Terrence had kind, deep brown eyes, and he was incredibly polite. I began by asking him to describe his typical daily routine, and after that question, I never relied upon another one that I’d drafted in advance. We just talked— about his life in prison, his family, and how he passes the time. When several hours had passed, I knew I should be heading back to Jacksonville— I was scheduled to present a paper at an academic conference hours away. I felt sad and guilty leaving. I promised Terrence we’d stay in touch, and that I would be back. I had to say it, and I felt like he needed to hear it. As I packed up my things, I asked Terrence if he knows what he’ll do when he’s released. He didn’t miss a beat: “first I gotta make it outta here.”

Cara Drinan is a Professor of Law at Catholic University and a nationally recognized expert on the Sixth Amendment right to counsel, juvenile sentencing, and criminal justice reform. She is especially interested in giving voice to those whose lives have been shaped by the mass incarceration phenomenon. She is the author of The War on Kids: How American Juvenile Justice Lost Its Way.