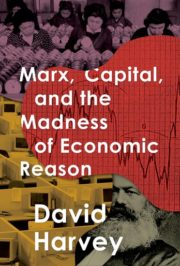 Marx, Capital, and the Madness of Economic Reason

Technology has undoubtedly changed how the economy operates, from the steam engine to the smartphone. But are machines a legitimate source of value in a capitalist society? In the following excerpt from Marx, Capital, and the Madness of Economic Reason, David Harvey delves into Marx’s Capital to better understand the value of man and machinery in a technology-dependent world.

The question of technology is foundational for understanding the dynamics of capital in motion. Marx is one of the most incisive and prescient commentators on this topic. This is not to say his analyses are complete or can pass unchallenged. Technology in combination with science is a major focus throughout Volume 1 of Capital but is held constant in Volume 2. In Volume 3 he deals with some of the consequences of technological change for profits and rents along with occasional comments on certain technological and organizational features of financial intermediation and monetary circulation. Marx’s main focus in Capital is on the role of technology and science in relation to the valorisation of capital and the production of commodities. In the Grundrisse he adopts a more expansive stance and provides intense, sometimes speculative and prescient commentaries on technological issues. But there is nothing substantial in his works about the technologies of realisation and circulation (apart from transport) or of social reproduction (including the reproduction of labour power) and the technologies of distribution are not systematically scrutinised either. The upshot is a rather one-sided view of technological and organisational change.

“Only under capitalism do we find a systematic and powerful force for technological and organisational dynamism that is sustained and cumulative in its effects.”

Capitalists in competition with each other sell their commodities at a social average price. Those that have a superior technology or organisational form in production gain excess profits (relative surplus values) because they produce at a lower individual cost of production and sell at the social average. Conversely, those with inferior technology or organisational form attain lower profits or losses and are either driven out of business or are forced to adopt the new methods. The advantaged producers have an incentive to adopt even better methods to preserve their market share and their excess profits. The fiercer the competition the more leapfrogging innovations are likely to occur as one firm jumps ahead and others catch up or go even beyond the technological mix and the organisational form that reflect the social average. The forces shaping the labour process at the point of valorisation push incessantly towards raising the productivity of labour power. As the productivity of labour rises so the value of individual commodities falls. If wage goods become cheaper then the value of labour power (assuming a fixed physical standard of living) declines, leaving more surplus value for capital. All capitalists stand to gain higher profits (more relative surplus value) from rising labour productivity in the production of wage goods. Increasing relative surplus value sometimes goes hand in hand with a rising physical standard of living of labour. It all depends on the strength of productivity gains and how the benefits from increasing productivity are distributed between capital and labour. A small part of the relative surplus value is turned back to labour so they can acquire more use values, while most of it goes to capital. This depends on the state of class struggle (unions often negotiate productivity sharing clauses in contracts). The drive to produce relative surplus value underpins the incessant pressure towards technological and organizational changes in production.

For the capitalists, machines seem to be what they truly are: a source of extra surplus value. Capitalists infer from this that machines are a source of value. Marx argues that this cannot possibly be so. Machines are dead or constant capital and as such they cannot produce anything by themselves. Part of the value of the machine passes into the value of the commodity but it does so as constant capital (i.e. capital that does not change its value through use). Living labour (and not past labour) is the only source of surplus value. Machines merely assist to raise the productivity of labour power such that the total value remains the same while the value of individual commodities falls. The result is a paradox.

David Harvey is Distinguished Professor of Anthropology at the City University of New York Graduate School, where he has taught since 2001. His course on Marx's Capital, developed with students over 40 years, has been downloaded by over two million people since appearing online in 2008. He is also the author of The Enigma of Capital, A Brief History of Neoliberalism, The Ways of the World, and Marx, Capital, and the Madness of Economic Reason.