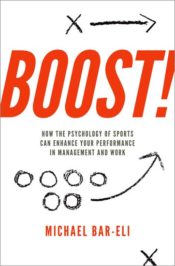 Boost! How the Psychology of Sports Can Enhance your Performance in Management and Work

Athletes’ maximum performance, also known as peak performance, is often characterized or accompanied by what is called a “flow state” or “peak experience.” Athletes describe this state as being “on automatic pilot,” “totally involved,” “hot,” “on a roll,” “in a groove,” or “in the zone.” An excellent example is provided by the great German goalkeeper Oliver Kahn in the 2001 champions league final game, between his team FC Bayern Munich and FC Valencia.

In the shootout that won the game, he saved three of seven penalty kicks, or 42.86 percent. Even if you count the penalty he did not stop dur­ing the game, this makes it three out of eight, which is 37.5 percent— still far beyond the base rate (that is, the initial chances of a goalkeeper saving a penalty kick to begin with) of 25 percent. He attributed his success to “a state of absolute concentration, with optimal control over my emotions and thoughts.”

A flow state, however, is a rare event—it is an ideal state to which the performer strives, but only infrequently achieves. This is probably one of the reasons why Russian sport psychologist Yuri L. Hanin criticized the Yerkes-Dodson law’s inverted-U hypothesis by arguing that it is unlikely that only one optimal arousal state exists that corresponds with the max­imal performances of different athletes across contexts. He used a well-known anxiety test, the state-trait anxiety inventory (STAI), developed by the late US psychologist Charles D. Spielberger and his team, to operationalize arousal. He then conducted systematic retrospective mul­tiple field observations of athletes’ state anxiety and performance levels.

Hanin found that all top athletes had an individual zone of state anxi­ety in which their maximal performance occurred, whereas poor perfor­mances occurred outside this zone. He defined this zone as an athlete’s mean precompetitive state anxiety score on the STAI, plus or minus four points (which is a standard deviation of approximately 0.5), and labeled it the zone of optimal functioning (ZOF).

Later on, Hanin extended this idea to include more emotional states and emphasized the individuality of the ZOF (IZOF). What matters for us now, however, is the fact that most of the time, we sport psychologists are satis­fied with our athletes being in their (I)ZOF; if they manage to achieve a flow state it would be a great bonus, because of its low probability of occurrence.

Now, if you combine the main ideas reflected by Yerkes-Dodson and Hanin, you actually get two possible non-optimal arousal states for athletes to be in, and two corresponding strategies for enhancing performance to strive for the maximum:

Your natural personality also plays a substantial role: for example, if you are a nervous versus relaxed person, or Type A versus Type B. Type A people are those who are achievement- oriented and highly competi­tive, have a strong sense of time urgency, find it hard to relax, and become impatient and angry with delays or when confronted with people whom they perceive as incompetent. Type B people are able to work without becoming agitated, and to relax without feeling guilty. They have less of a sense of time urgency—including its accompanying impatience—and are not easily roused to anger.

Your level of expertise plays a role, too—it makes a big difference whether you’re a seasoned professional or a novice. Starting out in the cor­porate world, as an assistant, you are likely to defer to more experienced coworkers who have a better understanding of company processes, inter­office politics, or a particular industry in general. There is nothing wrong with that, but understanding your strengths and weaknesses will help you figure out how to reach your own level of peak performance.

In finding your or your team’s optimal level of stress and arousal, the environment should also be taken into consideration. The environment that managers and bosses create and cultivate is crucial to employee per­formance. For example, would you experience more of a threat in a sta­dium full of 80,000 spectators, as compared to training, or do you revel in it, as did Daley Thompson and Anat Draigor? Understanding and know­ing your team, and the individuals that comprise it, will help you create the appropriate environment.

Consider open-plan offices: at the beginning of the twenty-first century, we find more traditional cubicle structures being eschewed in favor of these new arrangements. As of the end of 2014, about 70 percent of US offices had no or low partitions. Such settings, in which the empha­sis is on large, open spaces with little to no barriers between desks and offices, were at first seen as an exciting new way to break from the typical cubicle mode in an effort to raise transparency, camaraderie, and team­work. Companies like Google, Facebook, Yahoo, eBay, Goldman Sachs, and American Express have all implemented the idea.

What many people didn’t foresee were the accompanying issues of high levels of noise and the lack of privacy, all of which have led to greater stress on employees—and not the good kind. Research over the last decade has shown that open office design is negative to employees’ satisfaction with both their physical environment and perceived productivity.

At the end of the day, it’s important to decide what environment will be best for the team to increase performance—finding that sweet spot may be difficult, but it will lead to a stronger, more successful workforce. If your employees are uncomfortable and stressed out, they are likely to reach that too-high arousal stage and their performance will suffer. As a leader, you will then need to figure out how to decrease that stress and get your team back to its zone of optimal function.

Michael Bar-Eli is a Professor and Chair of the Business Administration Department and the Nat Holman Chair in Sports Research at the Faculty of Business and Management, Ben-Gurion University of the Negev, Beer-Sheva. He also heads the Sport Management program at the Wingate Academic College. Bar-Eli has consulted for elite athletic teams, including the Israeli and German national basketball teams, the Israeli national water polo team, several Israeli male and female soccer and basketball teams, and Israeli Olympic teams, along with prominent organizations such as the Israeli Defense Forces, where he was the head organizational psychologist of both the Israeli Artillery Corps and the Combat Fitness Center. He is the author of Boost! How the Psychology of Sports Can Enhance your Performance in Management and Work.