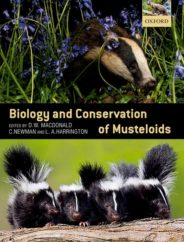 Biology and Conservation of Musteloids

Distinctive and familiar, loved and loathed by different sections of the public, the badger is iconic of the British countryside. But Oxford University’s Wildlife Conservation Research Unit (WildCRU) has discovered that, due to their sensitivity to prevailing weather, badgers, like the proverbial canary in a coal mine, are also sentinels of climate change.

Led by Professor David Macdonald, the WildCRU team has studied the intricacies of badger society for over 30 years at Wytham Woods, Oxford’s famous ‘laboratory with leaves’, where, for all practical purposes, Charles Elton invented the science of Ecology in the 1930s. From this meticulous record of all their births, deaths, and marriages, it has emerged that badgers, like Goldilocks, prefer things (well, the weather rather than porridge) to be ‘just right’. If summers are too dry they are unable to find sufficient earthworms, their main prey. But if summers are too wet, badgers get sodden, and prefer to stay underground in their setts if it rains hard, costing them energy and foraging time. Notably too, it is cubs that are most vulnerable to severe weather, as they simultaneously grapple with rapid growth and juvenile infections; exemplifying how populations are only as resilient as their weakest link.

Frost also precludes earthworm availability, although badgers have evolved to cope with a paucity of wood over winter, using periods of torpor to conserve energy. In this regard, initial research found that milder winters were broadly beneficial to badger success, until ever-more benign conditions tempted badgers to wander much further on dark, foggy nights, tragically leading them to fall victim to road traffic accidents in far greater numbers.

Macdonald’s team has also tracked individual badgers with the latest technology, able to measure how the pitch, yaw, and roll of badger motion translates into energy expended. Again, there is subtlety to their findings, because while more corpulent badgers are risk averse, only leaving their setts to forage under optimal conditions, thinner, more desperate badgers do not have this luxury, and would rather die on their feet than in their beds, and venture forth in much less promising weather. Of course, who’s up and who’s abed also affects which badgers can be trapped, or monitored by the group’s video surveillance. Modelling these data reveals that the proportion of the population caught is, accordingly, a product of prevailing weather. This is important not only in making accurate population estimates but, in the case of badgers, highly pertinent to the timing of interventions to cull or vaccinate badgers, as part of national policy connected to TB management.

In collaboration with colleagues in Scotland and Ireland, research has also revealed biogeographic patterns with weather via food and energy budgets, limiting which areas of peripheral habitat badgers occupy. With predicted warming patterns improving weather conditions this will likely lead to more badgers and spreading populations in these regions, although there are risks that this could bring them into greater conflict with farming, development, and traffic.

And so with 2016 the warmest year on record, and with CO2 levels exceeding 400 ppm through 2017, the badger is providing valuable insights, exemplifying the vulnerabilities, and adaptiveness of animals struggling to survive in human-modified habitats subject to human-modified weather.

All slideshow images used with permission from authors and students.

Chris Newman joined the WildCRU in 1991. He is the co-ordinator for the WildCRU's Badger Project, specialising in life-history evolution and the effects of climate change and disease on population dynamics. Chris is the Mammals Officer for the Zoology Department's Animal Welfare and Ethical Review Board. Outside of academia, he manages 350 acres of Forest Stewardship Council certified woodland in Nova Scotia, Canada, including 16 acres growing Haskap berries.

Lauren A. Harrington a member of the WildCRU since 1996, has worked with a number of mustelid species that include the most endangered mustelid, once extinct in the wild - the black-footed ferret, and the most widespread invasive mustelid - the American mink. She developed a passion for mustelids during long nights spent on the prairies of Wyoming and Montana radio-tracking some of the first captive-bred black-footed ferrets to be released into the wild.

David, Chris, and Lauren are the editors of "Biology and Conservation of Musteloids".

How much do you know about cheetahs? [Quiz]

Top 10 facts about the giraffe