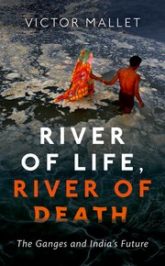 River of Life, River of Death: The Ganges and India's Future

Most of the great cities of the world were built on rivers, for rivers have provided the water, the agricultural fertility, and the transport links essential for most great civilizations. This presents a series of puzzles. Why have the people who depend on those rivers so often poisoned their own water sources? How much pollution is enough to kill a river? And what is needed to bring one back to life?

I didn’t think much about this growing up as a child in London in the 1960s. All I knew or thought I knew, was that the Thames was toxic. If we fell into the river we would have to go to hospital and be subjected to a “stomach pump” to extract the dirty water. We children imagined a kind of reverse bicycle pump stuffed down our throats, which is more or less how it works in reality.

As I grew up and began to travel, I saw, sailed on, walked along, and read about many more waterways, from streams and canals to the great rivers of the world. Some – the Nile, the Zambezi, the Essequibo, the Mekong – were remarkably clean, because of the absence of large cities along most of their lengths. Others, like the Rhine and the Seine, were so-so. And still others, particularly the waterways of densely populated Asian cities undergoing their high-speed industrial revolutions, were filthy. The Malaysian writer Rehman Rashid’s description of the Sungei Segget as a “rank, black, stagnant, noisome ditch, filling the town centre of Johor Baru with the aroma of raw sewage and rotting carcasses” reminded me of Charles Dickens’s description in Hard Times of a fictional town in the north of England that was probably Preston: “Down upon the river that was black and thick with dye, some Coketown boys who were at large – a rare sight there – rowed a crazy boat, which made a spumous track upon the water as it jogged along, while every dip of an oar stirred up vile smells.”

Spumous? If you’re looking for spumous, I can recommend the Yamuna River below the Okhla barrage in Delhi, after the city and the farmers around it have taken most of the clean water for irrigation and drinking and replaced it with a mixture of industrial waste and the untreated sewage of one of the world’s largest cities. At dawn, the great mounds of white foam thrown up by the barrage are tinged with pink as they float gently across the oily, black surface of a holy river once celebrated in ancient Indian literature as a paradise of turtles, birds, fish, deer and the gopis or female cowherds who tended to the playful god Krishna. So disgusting is this water that the latest official measurements I could find from Okhla show it to contain half a million times the number of faecal bacteria allowed under the Indian standard for bathing water.

The abuse of the Yamuna, and the Ganges or Ganga of which it is a major tributary, is particularly puzzling because both rivers are worshipped as goddesses by hundreds of millions of Hindus, and because they are so important as sources of water and fertile silt to the vast populations of north India, from the lower slopes of the western Himalayas all the way to Calcutta and Dhaka and the Bay of Bengal in the east.

Enter Narendra Modi, prime minister of India since 2014 and leader of the Hindu nationalist Bharatiya Janata Party. The Yamuna just below Delhi is already dead, but the Ganges itself, while gravely threatened by pollution and over-extraction of water, is very much alive. You can see fresh-water dolphins far up the river in Allahabad, Varanasi, and Patna.

Modi has made saving the Ganges one of his policy priorities, and he once told Barack Obama, then US president, that he wanted to rescue India’s great river just as the United States had restored the Chicago River. The cleaning of the tidal Thames in London – once devoid of all fish life – and of the Rhine in continental Europe are other examples to follow.

Modi seems to have the political will to save the Yamuna and the Ganges, and he would certainly win the backing of the majority of Indians for the improved sanitation and pollution control that will be necessary. There is money there too, including $1 billion from the World Bank in what would be among its largest ever projects.

Three years into Modi’s five-year mandate, however, surprisingly little has been achieved to restore India’s rivers. It looks as if I’ll have a long wait before I can jump into the Yamuna at Okhla and go for a swim without needing my stomach pumped afterwards.

Victor Mallet is a journalist and author obsessed by rivers and oceans. His latest book, published by OUP in October 2017, is River of Life, River of Death: The Ganges and India’s Future. He has worked for more than three decades as a foreign correspondent for the Financial Times and Reuters in Europe, Africa, the Middle East and Asia. His previous book, The Trouble with Tigers: The Rise and Fall of South-East Asia (HarperCollins 1999), explored the social, political, environmental and economic implications of the modernisation of Asia and the financial crisis of 1997-98.