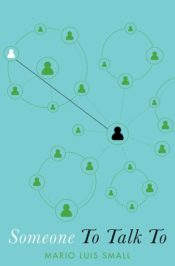 Someone To Talk To

When people are facing difficulties, they often feel the need for a confidant-a person to vent to or a sympathetic ear with whom to talk things through. How do they decide on whom to rely? In theory, the answer seems obvious: if the matter is personal, they will turn to a spouse, a family member, or someone close. In practice, what people actually do often belies these expectations.

We sat down with Mario L. Small, author of Someone To Talk To, to answer some key questions into how we decide whom to rely on and understanding social networks.

Why did you decide to look into the topic of who we connect with, how, and why?

I came upon the topic by chance. Some years ago, I was interviewing mothers in New York for a study about the networks they were forming in their children’s childcare centers. When I asked them about whom they were willing to trust their children with, they often said they were careful not to trust others. But when I asked them to recall who they had actually left their children with, many of them had in fact trusted their kids with other parents they didn’t know that well. I began wondering whether people might be more willing to trust others than they seem to believe, and whether trust didn’t work as we tend to think it does.

What can we learn and take away from this, in regards to our everyday lives?

I learned that we are far more willing to confide in people we are not close to than we tend to say about ourselves, or than social science theories predict about how people use their networks. Most people confide in their spouses and close friends, sure. But they also share very personal worries, problems, and concerns with their bartenders, hair dressers, gym partners, coworkers, barbers, people at church, and of course therapists and religious leaders. In fact, the idea of sharing something very personal with the person sitting on the next seat on the plane is common. The need to talk is so pervasive that what people often need is not so much a best friend (though these are great to have) as the ability to interact regularly with people in contexts where they have the time to talk.

How should we analyze and understand social networks?

One of the consequences of the spread of network science, and the rise of “big data,” is that scientists now study friendships and networks with enormous datasets from online platforms such as Facebook, where the relations among thousands of people can be mapped and analyzed to reveal their underlying structure. These studies are wonderful and important, but we also need studies that  go small rather than “go big,” and  probe how individuals actually think about and use their networks in their everyday life. Studies that go small and deep can reveal aspects of human nature that are difficult to see in large-scale sweeping studies that often require simplifying assumptions. In this case, one of those assumptions—that people will only trust personal matters to those they are close to—was shown to be wrong by just following how individuals really related to others in their everyday contexts.

What was the most surprising thing you learned from your research?

When I began this study I was expecting some, but not most people, to be willing to confide in acquaintances and other “weak ties.” For example, I assumed that the graduate students I studied might be more likely to confide in people they are not close too  than people in general. I was surprised by how pervasive it was—people of all races, class backgrounds, women and men, younger and older adults. Americans of all walks of life often talk about important or personal matters to people they are not close to.

Why is this topic relevant today?

For some time, people have been saying that online platforms such as Facebook are making us lonely, because they encourage us to accumulate “friends” who are not really friends. Some part of those arguments is true. People can create an online existence that seems increasingly removed from their reality, one more focused on seeming happy than being truly fulfilled. But in spite of social media platforms, the kind of interpersonal networks we experience in the real world still matter. The fact that so many people today still discuss their personal worries with so many of those they run into, physically, in the real world, tells me that such interpersonal networks matter as much as ever.

Do you have advice on how to connect with people, if you’re someone who finds it difficult?

I would say it is useful to be comfortable with different ways of connecting. Having deep personal friends is great, but the act of talking is probably more important than whom it is we talk to. It is possible to feel catharsis from sharing something troubling with someone you don’t know very well. And such conversations often turn strangers into acquaintances, acquaintances into friends. So, spending a great deal of time around other people—at cafes, neighborhood bars, barbershops and hairdressers, laundromats, religious institutions, social clubs, sporting activities, festivals, neighborhood organizations, and the like—being physically in the presence of others tends to encourage interactions. And interactions make it easier to connect.

Mario L. Small, Grafstein Professor of Sociology at Harvard University, is an expert on poverty, personal networks, cities, and social science methods. He is the author of Villa Victoria: The Transformation of Social Capital in a Boston Barrio, Unanticipated Gains: Origins of Network Inequality in Everyday Life, and Someone To Talk To.

Can Self-Help Save the World?