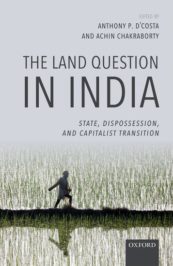 The Land Question in India: State, Dispossession, and Capitalist Transition

Land in the process of development can be viewed as a commodity, and like other commodities, can be bought and sold. Such a transformation presupposes that land historically was not a commodity. Peasant cultivators eked out a subsistent lifestyle and feudal lords taxed the peasants. Property rights as we know it did not exist then. Land was not owned, sold, or bought, but the threat of evictions of cultivators loomed large if tribute or tithe was not received by feudal lords or nawabs.

With the arrival of the East India Company and subsequently Britain, the land-based stability of the Indian village was swiftly undone. Clever and cunning, land revenues were efficiently collected by British officials through the zamindari intermediaries of the Moghul regimes. By collecting land taxes, which were now to be paid in cash, peasants were compelled to sell surplus output and offer their labor. Gradually evictions and the recognition of non-customary owners of land, largely former tax collectors and moneylenders, small time nobility, and increasingly affluent farmers characterized the countryside. Land became privately owned and changed hands, which led to vulnerability of millions of people around the world.

Land revenues was an important source for financing the British Government in India, which led to the introduction of cash and thus to a wage-based rural economy. This transformation of the peasant economy from subsistence to cash and wage-based economy with (surplus) output sold in the market place can be broadly construed as capitalist transition. Prefacing such a transition is primitive accumulation in which the separation of the peasants from their land and the means of production has been a prerequisite.

Germane to the land question is the attempt to rid the countryside of the “surplus” people and turn them into the industrial proletariat. Fewer people in rural areas suggest higher agricultural productivity and thus rising incomes. As cost of labor increases mechanization also takes root, while surplus people from the countryside find their way in urban areas working in non-agricultural activities such as industry, construction, and myriad informal activities.

The land question in India today is not about agrarian transition but about commodification.

Dynamic capital accumulation is expected to slowly dissolve low-end informal activities and formalize economic transactions. With lower food prices, urban wages would be marginally higher than rural wages to induce migration and generate labor for industrialization. Furthermore, rising incomes in the countryside would become markets for industrial goods and the two sectors would positively reinforce each other as savings were directed toward capital formation.

The land question has thus revolved around the agrarian transition question, which refers to a turning point when capitalist relations of production enter the countryside, providing the motor force for further capital accumulation outside of agriculture. Uprooted peasants become wage workers or the industrial proletariat, while farmers introduce efficiency-enhancing production methods, accumulate, and contribute to economic diversification.

Such a grand narrative for India today has at least three shortcomings. If the genesis of capitalism from noncapitalist relations of production occurred at a specific historical juncture, today the process of primitive accumulation is complete. Capitalism is characterized by both capitalist and noncapitalist forms of production organization, and land is not involved in the same historical role where farmers are dispossessed to usher in dynamic capital accumulation in the countryside.

Second, the inevitability of structural transformation is wanting. The persistence of a “subsistence economy” in the milieu of a small thriving advanced capitalist sector suggests an “incomplete transition” thus casting doubts on the idea of transition and capitalist progress itself. Dispossession in India is not producing wage laborers en masse to be employed by capital. It leads to confinement of the dispossessed in the informal sector, not to the complete dissolution of the peasantry, and not to the creation of an industrial proletariat. Instead, precarious forms of employment, such as self-employment, casual labor, and vagabondage are the manifestations of contemporary capitalism.

Third, the empirical reality for India shows that agriculture (and thus land) is not playing out its historic role in the transformation process. Differential rates of growth across classes and pronounced social differentiation in the countryside exists but does not necessarily drive dynamic accumulation in the countryside. The peasantry remains with the absence of a large industrial proletariat despite a fair degree of structural transformation through nonagricultural development.

The land question in India today is not about agrarian transition but about commodification. It is about desperate cultivators holding onto small parcels of land, others selling/acquiring land to install gleaming steel and glass buildings, four-lane highways, industrial corridors, and special export zones. The state also acquires land under the guise of public purpose on behalf of big business when dispossession and loss of livelihoods are at stake. The land question today is not about transition but the unprecedented stalemate between dispossession and lack of capitalist dynamism, and in some instances a cozy relationship between big business and the state underpinning a highly polarized society.

Anthony P. D'Costa is Chair and Professor of Contemporary Indian Studies, Director of Development Studies at the University of Melbourne. He is one of the editors of The Land Question in India: State, Dispossession, and Capitalist Transition.