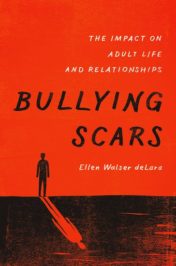 Bullying Scars: The Impact on Adult Life and Relationships

When you stretch a rubber band, even after many times, it will likely return to its original form. We call this resilience. When children are stretched and bent out of shape due to bad experiences they encounter, we expect they will be resilient too and snap back to their previous self. However, after various types of difficult or traumatic interactions, children are not the same. The analogy of the rubber band does not hold up.

Most children experience bullying in some capacity—as victim, as witness, as bully—or maybe all three. As adults we tend to think there is no damage, with the exception of perhaps an uncomfortable memory or two. However, the science on this subject depicts something different.

Every day children are bullied in their own homes, in their schools, on their school buses, and in their neighborhoods. Children are bullied by parents, siblings, classmates, teachers, and by their friends. Bullying takes numerous forms: verbal, psychological, physical, and sexual, and takes place in person or online. Bullying is an international phenomenon. It is also an area where adults have conspicuously failed a basic social contract: to protect children.

Despite contending with these numerous adverse reactions, only a small percentage of bullied children ever tell parents or guardians about what they are experiencing. This is a significant problem and begs for a solution. Parents who don’t know can’t do anything to intervene or to be supportive. Children say they don’t tell parents because they are afraid of the kinds of interventions parents might consider or because they don’t want to worry them. This leaves children trying to deal with the impacts of bullying on their own.

A good number of people are aware that bullying in childhood can be injurious and can even be life-threatening for some. But how many are aware that there is a significant aftermath that can last a lifetime?

The effects of bullying on children are powerful. The effects on the same children, as adults, can be profound. Research indicates there are aftereffects including health, mental health and relationship problems for approximately 33% of adults who were bullied as children.

Adult victims of bullying suffer from immune system complications, diabetes, and heart disease at rates far greater than the national average. The hypothalamus-pituitary-adrenaline axis activated by constant anxiety in childhood remains on high alert for these adults. Further, studies have shown a greater likelihood of early mortality or premature death for those who were bullied compared to others.

Relationships are affected for adults bullied as children. Their trust in others is eroded through years of torment, and so attempting an authentic friendship or intimate partnership is laced with anxiety. Consequently, some adults say they simply stay out of relationships—either with friends or with intimate partners. Some abandon a relationship when a conflict arises. Some stay in abusive relationships thinking: “Who else will want me?” Others take an offensive position and find that they are aggressive and violent in their relationships. All of this gets played out in work settings as well.

Childhood bullying leaves deep scars on many children and adults. Even those fortunate enough to come from extremely supportive families can carry profound and hidden wounds. At the same time, there are people who are able to turn their pain into something positive. I have described this phenomenon as Adult Post-Bullying Syndrome (APBS). APBS is different from PTSD. Adults with APBS describe negative effects from the bullying they endured but also describe specific positive consequences, such as wanting to help others. This is a component of post-traumatic growth.

Intervention for children at home and at school is critical. Where damage has been done, intervention takes the form of counseling or therapy for children and families, and for adults who still suffer. But prevention, of course, is the key. There are many anti-bullying programs in our US schools, however they often fail to consider the specific population of the school and attempt to apply a one-size-fits all approach. This has not been met with good results particularly in districts with large minority school populations. Prevention is based on an unshakeable commitment to the idea of respect for others, respectful interactions, and the intrinsic value of difference. Schools have not figured out, as yet, how to produce these values in a systemic and in an ongoing fashion. Unfortunately for our children and for all of us, we are not living at a time when valuing difference and valuing respectful interaction are public policy ideals.

Ellen Walser deLara is Associate Professor on the faculty of the School of Social Work at Syracuse University. She is also a practicing family therapist with over 35 years' experience working with children, adolescents, and adults in both school and clinical settings. She is the author of Bullying Scars: The impact on adult life and relationships.