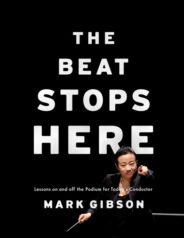 The Beat Stops Here: Lessons on and off the Podium for Today's Conductor

An overlooked aspect of the conductor’s rehearsal procedure is the precise planning of any given rehearsal and of the rehearsal trajectory, from first reading to final dress, toward the end of “peaking” at the concert. As I am wont to say after a bad rehearsal, you don’t want to peak too soon. My experience in China has provided the opportunity to explore this aspect with fresh eyes, given that, as we found in part 1, Do your job, the assumed rules of engagement do not necessarily apply everywhere. As I said at that time, “The rules of orchestra playing don’t change–looking, listening to the person next to you, communicating with the principal stands, keeping in touch with the conductor. Unless the “rules” are broken from the outset; unless the “rules” never existed in the first place, which clearly they didn’t here.”

OK, what rules did apply? How were they agreed upon? How were they enforced? Specifically, once I understood that my assumptions about how an orchestra functions were inaccurate and that this orchestra would actively challenge my approach to rehearsal, I had to decide how many of their unwritten rules I was willing to adjust to, and how many of mine I was determined to enforce. In a word, I needed a new strategy.

Let’s make a list of areas under discussion/negotiation, where my expectations diverged from those of the orchestra:

1. Starting on time/Length of breaks/Attendance Our rehearsals were scheduled to begin at 9:30 am and after the lunch break, at 1:30 pm. Breaks were supposed to last 15 minutes. None of this happened, in spite of my request after the first day that we be ready to start on time, at the assigned hour, and that breaks not run long. Even that phrase – “ready to start” – had different meanings for different constituencies in the orchestra. For some, perhaps 30%, it meant being in one’s chair, music out, warmed up and ready. For 50% or so, it meant getting into the rehearsal venue at 9:30. For 15%, it meant sauntering in a minute or two late, and then for the remainder, it just meant not showing up, for whatever reason that was never explained to me coherently. In my experience, the rehearsal that does not begin promptly with everyone in attendance is compromised and rarely gets off to a good start. The first day, we didn’t start on time, and as a result, we had bad sessions. I urged the orchestra to show up on time Tuesday, which they did, resulting in two superb working rehearsals. By 3:30 on Tuesday, I no longer felt the need to remind the orchestra to arrive on time for Wednesday’s morning rehearsal. Mistake. We began late, people were unfocused and inattentive, and by 9:35, I stepped off the podium, quietly but obviously perturbed, announced to the orchestra that we would take five minutes to collect ourselves, and that I would return at 9:40 to start over again. Walked out of the hall into the stifling 95º heat and returned at 9:40. We tuned, and I asked the musicians if they were ready to work. Silence. I asked again, a few said yes. A third time I insisted on the question, and finally, there was some sense of accountability and accord that we were ready to begin proper rehearsal.

The rehearsal itself was nonetheless limited and frustrating for many, because we had not come to agreement on the 2nd and 3rd components of the areas under discussion above. Until and unless we reconciled our differences in rehearsal approach and practice/prep expectation, our collaboration would continue to be difficult.

So, when do you, as conductor, compromise? What is in your power to fix, to change, to affect? What do you have to give up when you are a guest?

Obviously, we are not talking about a sit-down discussion and negotiation. This little dance is playing out in real time, during a tense rehearsal. Each time I stopped to fix something – a wrong or misread note or rhythm, faulty ensemble, shaky intonation–certain factions of the orchestra expressed their dismay in tangible, obvious fashions. Rarely have I felt more acutely what I call the “adversarial relationship” between orchestra and Maestro. And that is where things stood by the end of the Wednesday rehearsals.

More in part 3, resolution, where we will also look at the remaining two aspects of the process, rehearsal procedure and part preparation/practicing.

Mark Gibson is the Director of Orchestral Studies at the College-Conservatory of Music, University of Cincinnati, Mark Gibson enjoys teaching and his conducting career spans four decades and three continents. Among his former students are many of today's up and coming maestros, including Xian Zhang, Tung-Chieh Chuang, Annunziata Tomaro and Olivier Ochanine.