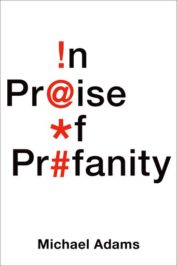 In Praise of Profanity

Social conventions determine why we use profane language. The deliberate use (or avoidance) of profanity is often a socially conscious decision: self-censorship may be driven by politeness, while profane language may be used to establish a sense of power. The following shortened excerpt from In Praise of Profanity by Michael Adams takes a look at the connotations behind of profanity and analyzes the social drivers behind its usage.

Politeness is the linguistic term for the philosopher’s moralized manners, while etiquette is the mere and perhaps not very reliable expression of politeness or manners. Much more is at stake in manners and politeness than in etiquette, though when confronted with a dozen forks at a fancy dinner, etiquette may seem, for the moment, a life-and-death matter.

Sometimes those inclined to proscribe profanity are more concerned with etiquette than with manners. I don’t feel it a breach in manners when a truly frustrated person says “Shit!” Indeed, I may recognize the frustration, sympathize with the person, and experience relief when I hear the profanity. The frustrated person and I share moral aims and I have to make some room for the expression of authentic feeling.

Still, saying “Shit!” may violate a social convention and even if it doesn’t, even if conventions are changing and different auditors gauge the authority of conventions differently, exclamatory profanity nonetheless rubs some “fragile sensibilities” the wrong way. What if your negative face merely wants peace and quiet, or to be spiritually undisturbed? Is someone else’s frustration—when expletively expressed— an imposition on those who unexpectedly witness it? And should we avoid profanity in order to save others’ faces rather than threaten them? These are all reasonable questions, especially if one is cautious about answering them absolutely, because the rules are complex and flexible. In some situations, bitch isn’t face threatening—it’s hard to imagine when cunt isn’t—and Fuck you can be endearing, an expression of intimacy or solidarity, rather than a challenge, said to the right person, for the right reason, in the right tone.

Can’t we all just get along? Surely, we can negotiate our way through our myriad, often competitive needs and desires. Surely, we can find room for strong expression but in less obtrusive forms of speech. Perhaps the very frustrated person could say—as some people do—“Sugar!” instead of “Shit!” Everyone sidesteps a steaming heap of scatology, and no one need take offense. Euphemism compromises strong expression but insists that speakers can say some version of what they want to say. You can avoid saying, “So, your grandmother’s dead” by saying “So, your grandmother kicked the bucket,” though a dysphemistic euphemism like that is likely to threaten a lot of faces, not least grandmother’s posthumous one. But “So, your grandmother’s gone to a better place” gets the death idea across while giving it a positive spin and threatening no face at all. Sugar! isn’t Shit! in expletive force, but it’s at least some sort of release—it expresses frustration as well, some would argue, as politeness allows.

Who can argue against being polite? We interpret politeness as private virtue in the public interest. In general, we follow the principle Edwin L. Battistella advances in his elegant book, Bad Language: “Avoiding coarse language in public signals an understanding of the boundary between public and private discourse and a tacit acceptance of that boundary.” But politeness can be put to complex and, if not malignant, certainly not benign social purposes—power takes advantage of our “tacit acceptance.” The linguistic category politeness may be universal, but profanity isn’t universally or historically framed as impolite. The question arises under certain conditions, as Tony McEnery argues in Swearing in English: Bad Language, Purity, and Power from 1586 to the Present, and he lays them out as follows:

Thus, the motive for euphemism may be a matter of manners, but manners may be a means of social subordination, and language policy deriving from manners may end up serving the interests of the few rather than those of the mass of speakers.

In the end, whether it’s a matter of deliberate language policy or just the sort of self-censorship we administer when we understand the limits and know we’re going too far, language use conforms to parameters imposed by power. So, Bourdieu says, symbolic power does not reside in ‘symbolic systems’ but . . . is defined in and through a given relation between those who exercise power and those who submit to it. . . . What creates the power of words and slogans, a power capable of maintaining or subverting the social order, is the belief in the legitimacy of words and of those who utter them. And words alone cannot create this belief.

In other words, the “problem” isn’t profanity or euphemism, but the interests outside and beyond them that govern value in social markets.

When we swear, we create and enact power, which is, indeed, related to extralinguistic power, and that power—the nonlinguistic kind—certainly shapes language use but it also simultaneously depends on it. The notion that the power of words and slogans either maintains or subverts the social order doesn’t account for the complexities of profanity. When the vice president uses profanity to construct his relationship to a senior senator, is he maintaining or subverting the social order? Both, it seems to me, and would he have said what he said if saying it had been irrelevant to his extralinguistic power? Isn’t saying it a proof of that power, but also a sign of weakness, in the sense that the power needs proof? In profanity, as well as in euphemism, linguistic and extralinguistic power interact, and the point of profanity might well be to draw our attention to interaction we overlook in commonplace discourse.

Michael Adams is Provost Professor of English Language and Literature at Indiana University, Bloomington, and author or editor of several books on language, including Slang: The People's Poetry, and In Praise of Profanity. For many years, he was Editor of the journal Dictionaries, and he recently retired as Editor of the quarterly journal, American Speech.