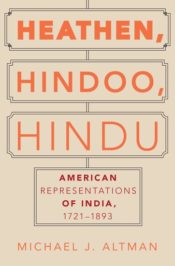 People deploy the word juggernaut to describe anyone or anything that seems unstoppable, powerful, dominant. The Golden State Warriors, the recent National Basketball Association champions, are a juggernaut. National Economic Council director Gary Cohn is a “policymaking juggernaut.” Online retailer Amazon is also a juggernaut. Tennis player Roger Federer is a juggernaut at Wimbledon. In Marvel Comics there is a supervillain named Juggernaut that possess seemingly infinite strength and invincibility. The word, with its double hard g’s in the middle and the same final syllable as “astronaut,” is fun to say and connotes an individual bigger than our world. This makes sense because the word “juggernaut” is the product of the collision between two forces, an encounter between two worlds: the English-speaking West and India.

“Juggernaut” is the Anglicized name for the Hindu god Jagannath, the “Lord of the Universe.” Jagannath, a form of the god Vishnu, presides over a massive temple in Puri, India alongside his brother Balabhadra and sister Subhadra. The most famous ritual at the Puri temple is the Rath Yatra. During the Rath Yatra the wooden forms of the gods are ceremonially placed on large towering carts, or chariots, and pulled through the streets of Puri by devotees. “Juggernaut” entered the English language in the early nineteenth century as colonial Britons in India encountered Jagannath and his chariot and tried to make sense of what they were seeing.

Rev. Claudius Buchanan was the first British official to popularize “the Juggernaut” in both Britain and the United States in the early 1800s. Buchanan was an Anglican chaplain stationed in India and a staunch supporter of Christian missions to India. As might be expected from a missionary during the period, Buchanan’s took a negative view of Juggernaut. In his letters sent back home from India, Buchanan presented Juggernaut as a dangerous, violent, and bloody religious cult. These letters were reprinted throughout Christian missionary magazines on both sides of the Atlantic. Then, in 1811, Buchanan published Christian Researches in Asia, his broad examination of the religious state of India and its need, as he saw it, for Christian missions. In Christian Researches Buchanan described devotees throwing themselves under the wheels of Juggernaut’s chariots. He used a biblical reference to the Old Testament’s description of the heathen god Moloch (to whom people sacrificed their children) to explain Juggernaut to his Christian audience:

“The idol called Juggernaut has been considered as the Moloch of the present age; and he is justly so named, for the sacrifices offered up to him by self-devotement are not less criminal, perhaps not less numerous, than those recorded of the Moloch of Cannan.”

Elsewhere in the book he claimed that Juggernaut “is said to smile when the libation of blood is made.” For Buchanan, Juggernaut represented everything that was wrong with religion in India that Christianity could solve. Juggernaut, to him, was a symbol of violence, bloodshed, death, and “idolatry.”

Buchanan’s description of Juggernaut became quite popular. Christian Researches in Asia was reprinted in numerous editions in America and Britain. The descriptions of Juggernaut were also excerpted in nearly every missionary magazine in the country. So, when the first American missionaries were sent to India from New England in 1812, it is no surprise that they sent back their own descriptions of Juggernaut to be published in America missionary magazines that continued to represent the god as violent and idolatrous. This image of Juggernaut was so well-known in Protestant missionary circles that one missionary magazine from 1813 even used Juggernaut as a metaphor for the vice of alcohol. Like Juggernaut, the article argued, alcohol has “shrines on the banks of almost every brook” and “four thousand self-devoted human victims, immolated every year upon its altars.” Thus, “juggernaut” started to become a term for any violent or dangerous force.

Over the next decades, as Americans learned more about India and Hindu religions, the meaning of “Juggernaut” began to split between its general use as a powerful dangerous force and its more specific reference to the Hindu god at Puri. For example, an article in Harper’s in 1878 titled “Juggernaut” quickly informed readers that “Juggernaut” was really named “Jagannath” and then proceeded to give the history of the temple at Puri. The article included a number of engravings depicting the floorplan of the temple, Jagannath’s chariot, and the forms of the god. Unlike the earlier missionary representations, the article in Harper’s sought to inform readers about the history of Jagannath and explain what devotees did and why they did it.

“Juggernaut” continued to be used as a reference to Jagannath, but its meaning was increasingly separated from any reference to the Hindu god. Use of the proper “Juggernaut” peaked in the early nineteenth century, while the use of the lowercase “juggernaut” slowly grew from the end of the nineteenth century to the present. By the 1930s, an anti-communist book labeled communism “the red juggernaut.” In 1963, The Juggernaut made his first appearance as a villain in Marvel’s X-Men comics. Juggernaut no longer had anything to do with the temple in India, but it still represented power, violence, death, and danger.

The two hundred year history of American use of “juggernaut” teaches an important lesson. From the beginning, “Juggernaut” and “Jagannath” were not the same thing. The process of Anglicization and translation that Buchanan and others engaged in meant that “Juggernaut” was a product of the British and American imagination. To say that Christian missionaries “misrepresented” or “misunderstood” Jagannath would be putting it too softly. They imagined Juggernaut as a foil, an Other, against which they could advocate for Christian missions. The missionary image of Juggernaut in the 1800s tells us more about the fears and values of Protestant missionaries than it does anything about people in India. As “Juggernaut” spread beyond missionary magazines and became the lower case “juggernaut,” the Christian missionary image of an “idol” on a chariot rolling through the Indian streets dropped away, but the sense of a giant, powerful, violent unstoppable force moving ahead endured. For two hundred years, juggernauts have rolled on in American imaginations.

Michael J. Altman is Assistant Professor of Religious Studies at the University of Alabama and author of Heathen, Hindoo, Hindu: American Representations of India, 1721-1893.

Who put Native American sign language in the US mail?