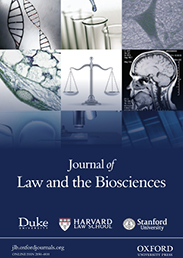 Journal of Law and the Biosciences

The Journal of Law and the Biosciences (JLB) is the first fully open access, peer-reviewed, legal journal focused on the advances at the intersection of law and the biosciences. A co-venture between Duke University, Harvard University Law School, and Stanford University, and published by Oxford University Press, this open access, online, and interdisciplinary academic journal publishes cutting-edge scholarship in this this important new field.

“What happened?” This is the first question a police officer will ask upon arriving at a crime scene. The answer to this simple question—What happened?—will determine the course of the criminal investigation. This same question will be asked by attorneys to witnesses on the stand if the case goes to trial. How those witnesses answer could mean the difference between guilt and innocence.

To answer these questions, of course, requires people to use their memory—their very human, very limited memory.

What if neuroscience could help the system reliably decode memories encoded in human brains so that recounted narratives of “what happened” would be as accurate as possible?

A recent study suggests that new brain-based memory recognition technology may be one step closer to admissibility in the courtroom. The results find that American jurors can appropriately integrate brain-based memory reading evidence in their evaluations of criminal defendants.

The finding is important because previous research on neuroscientific evidence in the courtroom has produced mixed findings. To be admissible, neuroscience expert testimony and exhibits must be relevant and must meet the jurisdiction’s requirements for scientific evidence (such as Daubert or Frye). But even if deemed relevant and of sufficient scientific merit, the evidence may still be excluded under Federal Rule of Evidence 403 (or its state equivalent) if the evidence’s probative value “is substantially outweighed by a danger of one or more of the following: unfair prejudice, confusing the issues, misleading the jury, undue delay, wasting time, or needlessly presenting cumulative evidence.”

Scholars have suggested that in the context of neuroscientific evidence generally, and brain evidence related to deception in particular, Rule 403 concerns may be particularly salient. Yet despite concerns under Rule 403 about the prejudicial effects of neuroscientific evidence, the scholarly empirical literature on the effects of such evidence is decidedly mixed. As one review described it, “empirical research into the neuroimage bias has produced what might appear to be a tangled mess of contradictory findings … [and a] research quagmire.”

What if neuroscience could help the system reliably decode memories encoded in human brains so that recounted narratives of “what happened” would be as accurate as possible?

Shen’s new study extends this literature by showing how neuroscientific evidence may not always be more persuasive than traditional types of circumstantial evidence such as motive and alibi.

The study includes new results from multiple experiments examining the effect of neuroscientific evidence on subjects’ evaluation of a fictional criminal fact pattern, while manipulating the strength of the non-neuroscientific evidence. By manipulating the strength of the case, the study estimates the effect of introducing brain-based memory recognition with electroencephalography (EEG) evidence.

Subjects were given several pieces of information about the defendant. The experiment manipulated two factors: (i) the expert evidence (none, incriminating brain evidence, exculpating brain evidence, incriminating polygraph evidence, and exculpating polygraph evidence), and (ii) the strength of the non-neuroscientific facts against the defendant (weak facts with an alibi, medium facts, and strong facts with a motive). Thus, in some scenarios there was alignment of neuroscientific evidence and circumstantial evidence, such as when John’s brain evidence suggested he was guilty and he also had a motive. Similarly, the evidence aligned when John’s brain evidence suggested he was innocent and he also had an alibi. It was the mixed conditions—where the brain evidence suggested a result that differed from the circumstantial evidence—that provided the most interesting test cases. In these cases, the study could see whether the neuroscience would seduce subjects and blind them to the rest of the evidentiary record.

It turns out that the neuroscientific evidence was not as powerful a predictor as the overall strength of the case in determining outcomes. The study concludes that subjects are cognizant of, but not seduced by, brain-based memory recognition evidence. In short: this brain-based evidence is not overly confusing, and likely would not be barred by Federal Rule of Evidence 403 (which prohibits overly confusing and prejudicial evidence from being admitted.)

Although brain-based memory recognition technology isn’t ready for courtroom use quite yet, such a day may not be too far away. What’s needed is more translational work to test the technology in real-world settings outside the lab.

Professor Francis X. Shen is an Associate Professor of Law at the University of Minnesota, where he directs the Shen Neurolaw Lab. He also serves as Executive Director of Education and Outreach for the MacArthur Foundation Research Network on Law and Neuroscience. Professor Shen conducts empirical and interdisciplinary research at the intersection of law and the brain sciences. Additional research areas of focus are criminal law and crime policy, and education law and policy.