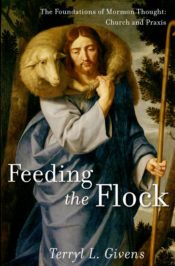 Feeding the Flock- The Foundations of Mormon Thought: Church and Praxis

Especially to those outside the faith, the beliefs and practices of the Mormon religion are largely unknown, and this has led to caricatures of the Church of Jesus Christ of Latter-day Saints. Below are 10 facts about Mormonism taken from Feeding the Flock: The Foundations of Mormon Thought: Church and Praxis by Terryl L. Givens.

1. In Mormon theology, the purpose and project of man is not to glorify or to serve God, but rather the inverse. It is God’s project and purpose to create the conditions for human happiness, by Him bringing to pass the immortality and eternal life of man. Instead of an angry or demanding Father, Mormons see Him as loving and devoted to His progeny.

2. Additionally, God’s purpose is not to reverse the sin, corruption, and death introduced into human existence by Adam. The Fall of Adam was only one part of God’s plan and not its major pivot point. God is less of a doctor whose job it is to heal a sick patient, but rather a physical trainer who works with an already healthy person to help him or her become more physically fit.

3. While community is undoubtedly important in other Christian denominations, in Mormonism it is an element of salvation itself. Community tends to be a way to bolster the morale and the prospects of salvation of each individual member by worshipping together and working against loneliness and individual alienation. Mormons construe salvation as bringing oneself into a web of eternal relations with other human beings as well as with God, what Joseph Smith referred to as a “sociality” with friends and family “coupled with glory.”

4. Mormonism traces its roots to a theophany (a manifestation or appearance of God or a god to a man) experienced by the founder of the faith, Joseph Smith, in a grove of trees in upstate New York when Smith was just 14 years old in 1820. Although this was Smith’s first experience of this type, he didn’t immediately take up his later role as religion-maker, even commenting a year or so later that he was “not so much a christian [sic] as many suppose I am.”

5. A second vision or theophany was the true initiation of the Mormon faith, some three years after Smith’s first encounter. Smith claimed that the angel Moroni appeared to him and laid the foundation for what would become the Book of Mormon, and to which Smith himself dates the foundation of the Church of Jesus Christ of Latter-day Saints.

7. In Mormonism, there is the belief that actual descendants of the ancient House of Israel from Jerusalem made their way to America under the leadership of Lehi. Thus Native Americans are included in the covenant, although ‘they are in need of evangelization by a “great Gentile nation”’ (Smith and those of white European descent).

8. Mormonism maintains that without the sacraments of the church, salvation is impossible. At the same time, its conception of evangelization of the dead means that “Mormonism” is the name of an institution whose reach is universal and timeless. Thus for Mormons, the Church both refers to the historical institution established in 1830 and simultaneously the body of the faithful, living and dead, who at any time now or in the eons of time to come, receive the ordinances of salvation and abide their corresponding covenants. In other words, the physical church is how one becomes integrated into eternal relationship with a heavenly family (the spiritual church), and while it is the only way to salvation, it is also simultaneously open to anyone, living or dead.

9. The social dimension of Mormonism is encapsulated in the idea of Zion. Zion is both the process and the goal of creating heaven on this earth, in the here and now. Crucially, Zion-building is not simply preparation for heaven, but actually heaven itself, in embryo, a mirror of eternal and transcendent heaven.

10. Initial branches of the church were established in Colesville and Palmyra, New York, and Harmony, Pennsylvania, then moving westwards to Kirtland, Ohio, and then further to sites in Missouri. Conflict followed the Mormons, culminating in the killing of Smith himself in 1844 in Nauvoo, Illinois. Eventually the Mormons moved to modern day Utah. At the time of Brigham Young’s death in 1877, he governed a cultural region larger than Texas and a church that comprised in excess of 100,000 Mormons.

Terryl L. Givens is the author of Feeding the Flock: The Foundations of Mormon Thought: Church and Praxis.