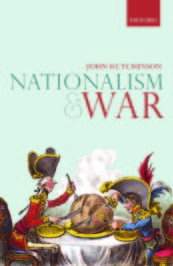 There are at least four ways in which warfare in its changing forms has been formative in the rise and transformation of national collectivities.

First, warfare has been central for much nation-state formation. Most nation-states that came into existence before the mid-20th century were created by war or had their boundaries defined by wars or internal violence. Charles Tilly famously wrote, ‘War makes states and states make war’ in tracing the rise of the nation state to the incessant warfare generated by the military revolutions of early modern Europe. Out of these conflicts in early modern Europe came centralized administrations, general taxation, and the control of violence over consolidated territories. The costs of war bankrupted the French state, leading to the French Revolution that, in fusing nation and state, mobilised mass loyalties with unprecedented military power. It is hardly an exaggeration to say that modern nationalism, in both its civic and ethnic varieties, crystallised in the subsequent Revolutionary and Napoleonic wars. Many nationalists subsequently have cited the willingness of populations to sacrifice themselves for the nation-state as an indicator of its validity.

Second, warfare has contributed to the formation of national communities. The constitutive myths of many nations are derived from war experiences, shaping perceptions of the fundamental values of populations, and their place in space and in time. Wars have often operated in the perception of nationalists as turning points in their history for good or ill. While Englishmen celebrated the defeat of the Spanish Armada that preserved the Protestant settlement in England, Polish nationalists mourned the eighteenth century partitions between three great Empires, creating the myth of Poland as the ‘crucified nation.’ Most societies have martial time markers of great victories as well as calamitous defeats, and nationalists have evoked these contrasting fortunes to draw moral lessons, especially when embedded in the collective memory through novels, poetry, films and school textbooks. In the modern period the cult of the glorious war dead has become something of a surrogate religion, in the form of great commemorative rituals, such as Remembrance Sunday in Great Britain, that call upon survivors and descendants to preserve the values for which the dead allegedly fought. Such ceremonies may serve multiple and divergent purposes: in a secular age to overcome the trauma of mass death, to create a sense of unity, and to express a hope for the future.

Third, while the nation state system in Europe arose out of centuries of conflict, the majority of nation-states and the modern international system came into being recently by a completely different martial route: imperial dissolution in three convulsive waves during the 20th century. The first was the collapse in total war of the dynastic continental empires in Central, Eastern, and Southern Europe at the end of the First World War; the second was the break-up of overseas empires in Asia and Africa after the Second World War; and the third began with the collapse of the Soviet Union from the military and economic pressures of the Cold War. These relatively sudden dissolutions catapulted nationalist elites into power governing ill-defined territorial units, sometimes carved violently out of ethnically disputed territories, lacking developed economic and political institutions. Indeed, these (often fragile) nation-states imbued with a sense of victimhood and political vulnerability have found themselves at odds with existing interstate systems, the rules of which were defined by former imperial powers. The disruptive effects of this large-scale entry of ethnically diverse states – often with unresolved boundary issues with neighbours – has regularly resulted in projects of re-imperialization and wars of aggression by great powers. Although institutions of transnational governance, such as the League of Nations and the UN, were created in the aftermath of these wars, they have failed to resolve the security problems created by these transitions.

Fourth, contemporary military revolutions (namely, the spread of high precision weaponry and developments in asymmetric war) in the context of this new global order affect how populations relate to their state, both in the West and beyond. In Western Europe a politics of reconciliation in the form of the EU has accompanied a shift from mass conscription to small professional armies and large-scale demilitarisation. Elsewhere, intra-state conflicts predominate in fragile new states, undermining the possibility of nation-building. Everywhere in a post-imperial world there appears to be a shift from heroic martial myths that legitimised nation-states, to traumatic narratives that focus on victimised peoples, generating debates about whether we are moving into a post-national world.

This seems exaggerated. Contemporary intrastate wars in the Balkans and Sri Lanka have contributed to nation-state formation. In the West, romantic ideas of war are overshadowed by a greater recognition of individual loss, as we see in the response to the returning dead from Afghanistan, but this is in part because of the perceived futility of these wars. The continued resonance of the remembrance ceremonies of the First World War indicate that state commemorative frames maintain their potency. In many regions nationalist tensions between rival powers are, if anything, intensifying. In Russia, Putin has revived the cult of the Great Patriotic War against Hitler, to project the power of the new Russian nation state and its quasi-imperial ambitions, given military expression in the Caucasus, Georgia, and the Ukraine. Moreover, in striking contrast to Western Europe, recollections of the Second World War in China and Korea have inspired a resurgence of anti-Japanese popular nationalism, focused on the Nanjing Massacre and the exploitation of ‘comfort women.’ Here, the perception of war as traumatic may itself contribute to national solidarity.

Featured image credit: The Siege and Destruction of Jerusalem by the Romans Under the Command of Titus by David Roberts. Public Domain via Wikimedia Commons.

What makes the EU, the UN, and their peers legitimate?