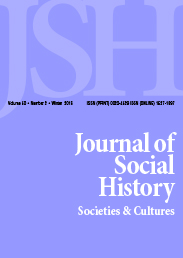 The Journal of Social History has served as one of the leading outlets for work in the growing research field of social history since its inception over 40 years ago. JSH publishes articles in social history from all areas and periods, and has played an important role in integrating work in Latin American, African, Asian and Russian history with sociohistorical analysis in Western Europe and the United States.

Conventional wisdom holds that many of the favorite silent movie actors who failed to survive the transition to sound films—or talkies—in the late-1920s/early-1930s were done in by voices in some way unsuited to the new medium. Talkies are thought to have ruined the career of John Gilbert, for instance, because his “squeaky” voice did not match his on-screen persona as a leading male sex symbol. Audiences reportedly laughed the first time they heard Gilbert’s voice on screen. And in the case of the late silent era’s most popular female performer, the original “It girl” Clara Bow, a voice sometimes described as a “honk,” along with a strong Brooklyn accent and careless diction are often said to have forced her into retirement at the relatively young age of twenty-eight.

The real issue, however, was less the voices than the essence of the art. Despite our early-twenty-first century use of the word “movie” to refer to any cinematic production, silent movies and talkies differed substantially. Where talkies relied upon spoken words to communicate plot, ideas, and emotions, silent movies communicated visually using, as the name suggests, pictures that moved. In short, as seeing differs from hearing, so too movies differed from talkies.

The essence of silent movies was visual. As one observer at the time put it, in silent movies “People are doing something. We see them do it; even if they are only thinking or feeling…, we still see it.” Writing a movie column for a Chicago newspaper in the 1920s, Carl Sandburg marveled especially at actor Charlie Chaplin’s ability to convey complex ideas and emotions “with shrugs, smiles, solemnities, insinuations, blandishments.” Chaplin’s visual “sentences” were so “alive with gesture and intonation,” that Sandburg—one of the great American writers—could not imagine “reproduc[ing] any story Charlie Chaplin tells verbally.”

The visual nature of silent cinema made it particularly interesting to deaf Americans, for whom visual forms of communication were more natural than audible ones. In fact, historian John Schuchman argues that the silent movie era “represents the only time in the cultural history of the United States when deaf persons could participate in one of the performing arts with their hearing peers on a comparatively equal basis.” Alice T. Terry, a leading figure promoting a uniquely Deaf cultural viewpoint in the early-twentieth century, explained why: “[T]he movies [are] pre-eminently the place for pantomime or signs;” they have “no use for speech and lip-reading.”

On the other hand, deaf Americans in the late-1920s understood better than anyone the vulnerability of visual, non-verbal and non-audible, forms of communication confronted by the forces of normality. Beginning after the American Civil War, a number of individuals interested in deaf education—people such as telephone inventor Alexander Graham Bell—stressed the need to eliminate sign language and other visual/manual forms of communication from the nation’s deaf schools in favor of teaching verbal/audible communication in English. At the risk of over-simplification, their reasons—which included evolutionary theory, eugenics, and assimilation—boil down to an assertion that oralism could effectively cure deafness enabling deaf people to live more effectively in “the normal world.”

By the end of the 1920s—a decade famously proclaimed an era for “normalcy” by then presidential candidate Warren G. Harding—the oralist triumph in deaf education was nearly complete. According to data compiled in 1928, over 90 percent of deaf children received some or all of their education via oral methods and just two exclusively manualist schools remained (both were segregated institutions for the African American deaf). Oralists were much less successful reaching people outside the classroom, however. Sign language stayed alive in the Deaf community until the pendulum swung back in the manualist direction later in the twentieth century.

The normalizing attitudes and beliefs that underpinned oralist efforts in deaf education also afflicted ideas about modes of communication at the cinema. Even before talkies became a reality, the world depicted in silent movies was being described as “a dessicated [sic] and dehumanized world, from which all intrinsic worth has departed.” Similarly, the premiere of The Jazz Singer (1927)—widely considered the key film in the transition to talkies—was hailed at the time as “an upward step in [human] racial development which is dependent, absolutely, on the arts of communication.” The silent productions which continued to be produced during the next few years soon began to be referred to as “dummies” or “dumbies.” This, of course, recalls a common slur directed at deaf people, implying that a lack of oral and audible communication was connected to a lack of intelligence.

As in deaf education, the shift from movies to talkies met resistance. Charlie Chaplin was the most prominent resister, insisting that “I can say far more with a gesture than I can with words” and vowing “never [to] use dialogue in my pictures.” “It stands to reason,” added “It girl” Clara Bow, “that you can’t act as well when you have lines to think about, particularly those of us who have never been trained to talk while we act.” No less a movie authority than inventor Thomas A. Edison concurred, lamenting that because talkies required actors to “concentrate on the voice” they had “forgotten how to act.”

Nevertheless, within three years of The Jazz Singer’s appearance, virtually all new production of silent movies in Hollywood ceased. Eventually even Chaplin relented and began using audible dialogue to tell his filmed stories—though not until 1936. In the years since, only The Artist (2011) stands out as an attempt to make a true movie, where the pictures and actions of the performers, rather than their spoken dialogue, tell the story, but even the success of that Academy Award winning picture has not spawned copycats.

The movies had been cured of their deafness—or at least taught to “talk like living people,” as an advertisement for one theater sound system put it—but at what cost?

Russell L. Johnson formerly taught American history at Bilkent University in Ankara Turkey and the University of Otago in New Zealand and currently works in the Office of International Programs at Washington State University in Pullman. He discusses the topic of this blog further in his Journal of Social History article, “‘Better Gestures’: A Disability History Perspective on the Transition from (Silent) Movies to Talkies in the United States.”

Glioblastoma’s spectre in the Senate