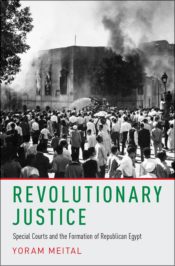 Revolutionary Justice: Special Courts and the Formation of Republican Egypt

On 13 March 2017, the legal saga of the trial of Hosni Mubarak ended. The deposed autocrat, who was convicted and sentenced to life in prison for his complicity in the killing of hundreds of demonstrators and embezzlement on a grander scale, was acquitted by Egypt’s Court of Cassation and freed from his detention. “The trial of the century”, as Egyptians have dubbed Mubarak’s prosecution, began soon after millions of Arabs took to the streets all over the Middle East, and it was concluded against the backdrop of the deep frustration of most from the results of the Arab Spring. This legal ordeal is but one prominent manifestation of the decisive role that the legal system played during the struggle over the reign of power following the toppling of Mubarak.

Mubarak’s trial symbolizes the deep divide between the revolutionaries who demand a fundamental change, and those who support the continuation of the regime that the ousted president inherited from his predecessors, Anwar Sadat and Gamal Abd al-Nasser. The latter, who led the Free Officers coup (23 July 1952), strove to establish a democratic system of government that raised the banner of equality and justice. Their social and political achievements notwithstanding, Nasser and his confederates laid the foundations for an authoritarian government that would reign well into the next century.

During the transition stage of the July Revolution, the government made intensive use of decrees, laws, and constitutional declarations. Two special courts, conferred with exceptional powers, prosecuted more than one thousand of the junta’s opponents—the majority of whom were members of the Muslim Brothers, but also liberals and communists. Although the Revolution’s Court and the People’s Court were dissolved at the end of the 1950s, the long-standing Egyptian practice of adjudicating citizens before special tribunals would reach new heights in the decades to come. The widespread use of these tribunals, including the military variety, turned this exception into the rule.

As the popular uprising against Mubarak gained momentum, a riveting public discourse took shape in Egypt that compared the revolution of July 1952 to that of January 2011. In both cases, a strongman’s ouster raised hopes among many Egyptians that a “new beginning” was just around the corner. Additionally, each of the attendant transition phases was undergirded by the following developments: a military council assumed control over the daily running of the state; a national state of emergency was declared; and a fierce political struggle erupted over the contours of the new dispensation. What is more, the acting governments took extraordinary measures, foremost among them suspending the constitution and disbanding parliament. Similar to the July Revolution, the judicial system and the courts have indeed loomed large in the on-going struggle over the new dispensation, including summarily arresting over 30,000 political rivals. Many of the detainees were ultimately prosecuted by military courts, which meted out harsh punishments on them.

Six years after the impressive civil uprising that demanded “the overthrow of the regime,” Egypt under President Abdel Fattah el-Sisi allegedly reflects the complete return of the authoritarian regime. However, the 2011 popular uprising and the toppling of Mubarak were just the beginning of a transition phase, the fate of which no one can predict. On the very day of 14 July 1789, when the Bastille was taken, or on 23 July 1952, when King Faruq was ousted, no one could have known that a Great Revolution was born in France, just as a revolution in Egypt.

All told, the January Revolution jolted the political awareness of millions of people from different walks of life, not least Egyptian Millennials. Many of them oppose the restoration of the authoritarian regime and fear that President Sisi is but a contemporary pharaoh. Although the field marshal’s meteoric rise to power constitutes a major milestone, it is doubtful that this was the last tidal wave of the January Revolution.

The current dramatic developments in Egypt show that political trials that take place throughout a transition phase generate rhetoric that plays a crucial role in the denouement of political struggles, nourishes the creation of new historical narratives, and help shape both the regime and opposition’s public image.

Yoram Meital is Professor of Middle East Studies and Head of the Chaim Herzog Center for Middle East Studies and Diplomacy at Ben-Gurion University of the Negev, Israel. His research focuses on the political, social, cultural, and economic developments in modern Egypt. He is the author of Revolutionary Justice: Special Courts and the Formation of Republican Egypt.

Will Egypt have another uprising?