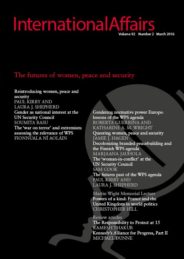 On the ninth of June, Haider al-Abadi, the Iraqi Prime Minister, arrived in Mosul to congratulate the armed forces for the liberation of the city. Mosul had been conquered by the so-called Islamic State in Iraq and Syria (ISIS) in 2014 and served as its Iraqi capital. This significant victory is not yet the end of ISIS in Iraq, however, both in Iraq and in Syria its territorial dominance has strongly diminished—by about 60 % since January 2015—and is likely to continue. The power vacuum emerging from this rapid decline has heated up competition between the numerous parties in the conflict—regular forces of regional states and great powers, as well as various militias often acting as their proxies—to control former ISIS territories. Thus, regional conflict structures that had been moderated by the urgent need to address the common threat represented by ISIS come again to the forefront.

The Iraqi Kurds, who have since 1991 built a markedly developed de facto state in northern Iraq, have already sensed opportunity in the aftermath of ISIS. Recently the Kurdish Regional Government (KRG) has announced to hold an independence referendum on 25 September in the territories it currently controls. While the complex post-ISIS situation in Iraq could, hence, constitute a unique historical opportunity to reach their long-term goal of independence, it also entails major obstacles for the Iraqi Kurds. Particularly, three challenges must be addressed to move closer to the goal of sovereign statehood: solving a paralysing domestic political crisis; finding an arrangement with Baghdad for the disputed territories located beyond the federal border of Iraqi Kurdistan, which are currently controlled by Kurdish Peshmerga forces; and gaining at least some international support for their independence.

The Kurdistan Democratic Party (KDP) headed by Masoud Barzani, (who is also the President of Iraqi Kurdistan since 2005) together with the Patriotic Union of Kurdistan led by Jalal Talabani, have been the two principal Kurdish parties in northern Iraq for the last few decades. As such their relations have often been very conflictual, marked by competition over power and resources. However, after the end of the Iraqi Kurdish Civil War (1994-1998), the two contenders transformed their relations and cooperated. This statebuilding coalition emerged and stabilized as a result of external incentives provided by outside powers, primarily the USA and Turkey. At the moment however, Iraqi Kurdistan is haunted by an internal political crisis and the Kurdish parliament has not convened since October 2015. The long-term KDP-PUK duopoly had already been weakened in the Iraqi Kurdish elections of 2013, when the PUK lost considerably and only arrived third at the ballot box, after the KDP and Gorran, a new party that split from the PUK. While the KDP initially organized a coalition government of all three parties, this cooperation deteriorated when a conflict over the extension of Barzani’s presidential term escalated and the KDP expelled Gorran from the government. In 2016 the PUK and Gorran concluded an alliance against the powerful KDP, which currently dominates the Kurdish Regional Government and controls the profitable oil exports.

In view of these internal political disputes, the independence referendum is also an attempt by the KDP to move a common cause forward to iron out the differences between the competing parties, and it seems that this approach was at least partly successful. At the end of 2016, the conflict over the KRG’s oil exports was so serious that PUK circles even envisaged to divide the Kurdistan region. However, since April 2017 the PUK has met several times with the KDP to discuss a possible referendum and this could potentially reactivate the duopolistic collaboration that accounts for the emergence of Iraqi Kurdistan. However, many voices in the PUK are, like Gorran, critical of the referendum. They demand that the stalled parliament reconvenes before a referendum takes place. President Masoud Barzani, whose term expired two years ago according to his opponents, has announced his intention not to run for the next elections scheduled for November. This might contribute to solving the domestic political crises, as Iraqi Kurdish unity is paramount in a regional environment counting on disunity to turn down Kurdish claims.

Due to their successful military campaign against ISIS, the Iraqi Kurds could expand their territory by about 40%. Of key importance for Iraqi Kurdish economic independence and viability is the oil-rich city of Kirkuk. Now that the Iraqi Kurds de facto occupy these disputed territories they seek to keep them, and the KRG intends to include them in the independence referendum. The Kurdish argument that military efforts against ISIS should be compensated is met with little sympathy in Baghdad, particularly when it comes to a key asset such as Kirkuk. While momentum on this question lies with the Kurds as they currently control these territories, their unity is paramount to the assertion of their claims. Since the Iraqi Kurds conquered Kirkuk in 2014, controlling its oil has not only been a thorny issue between Irbil and Baghdad, but also between the KDP and the PUK.

President Barzani has also stressed that any move towards independence would be pursued within negotiations with the Iraqi government. However, he equally emphasized that whatever the result of the referendum would be implemented. As early as 2005, an unofficial independence referendum was held in Iraqi Kurdistan and 99% of about 2 million votes supported a sovereign Iraqi Kurdistan. Securing electoral support for independence is therefore not an issue, while gaining external support is. So far, neither the USA, Russia, Iraq, nor any regional state have signalled openness towards an independent Kurdistan, except for Israel. As a landlocked entity, Iraqi Kurdistan is not viable without regional support, as it would otherwise economically collapse. In the last decade Turkey has been the main economic partner of the KRG. The calculus of Barzani seems to count on Ankara for such a step, but so far there is no sign of Turkish support for independence.

Out of the three major challenges discussed, gaining international support for independence seems to be the hardest to tackle for the Iraqi Kurds. There might be a scenario, in case Iraq shows severe fragmentary tendencies, in which Ankara might prefer an Iraqi Kurdish client state as a buffer against a Shiite-dominated rump Iraq. Yet overall, an independent Iraqi Kurdistan presently seems rather unlikely. If, however, the Iraqi Kurds manage to overcome their domestic crisis and unify their claims, the current situation has potential for them. If they play their cards right the independence referendum and some of the conquered territories could be instrumental as bargaining chips to integrate at least some additional territories to the KRG area or maybe gain a confederate status within Iraq.

Johannes Jüde is a Researcher in the Department of Political and Social Sciences at the European University Institute in Florence. His research interests include the comparative study of dynamics of state formation and state decay in sub-Saharan Africa and the Middle East; and the theory and practice of international statebuilding. He is the author of "Contesting borders? The formation of Iraqi Kurdistan's de facto state" published in International Affairs.