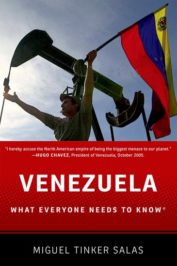 Venezuela: What Everyone Needs to Know®

For over eighty days, the opposition has challenged the government of Nicolás Maduro and sought his ouster through direct street actions. Dramatic images of masked protestors violently clashing with the Venezuelan National Guard or the Bolivarian Police dominate western media reporting on the country. The mainstream US media creates the impression that the entire country is in open revolt and Maduro only holds on to power through the use of sheer repression. The reality, however, is more complex and both sides appear headed towards an agonizing stalemate.

We have seen this approach taken before. In February 2014, a group of opposition leaders called for La salida (the exit), and also sought to topple the government through unconstitutional means. I lived through this experience being in Venezuela to conduct research. In 2014, as in the current crisis, opposition forces set up barricades that prevented the free flow of traffic and people; impeded commerce; blocked freeways; and burned buses and public buildings, including schools and government ministry offices, hoping to create conditions of un-governability. In any other country these actions would have received international condemnation. Supposedly peaceful protest became a pretext to confront security forces and engage in dramatic street battles. Opposition forces and many civic leaders, then and now, engage in dog whistle politics claiming to promote peaceful protest but refuse to condemn the violence.

In my neighborhood, masked youth openly carried handguns, shields, gas masks, Molotov cocktails, huge sling shots, and improvised mortars and regularly clashed with the National Guard. On more than one occasion some protestors tried to charge residents a toll to enter or leave our neighborhood. As the protest continued we ran out of natural gas and water, food became scarce, and we faced trying conditions.

Though the current crisis bears some resemblance to the events of 2014, there are also important differences. Oil revenues are the lifeblood of the Venezuelan economy, no matter who is in power. Facing a continual drop in oil revenue, the government has cut spending drastically as a percentage of the shrinking economy. Even more drastic has been the fall in imports, over 70 percent in the last five years. For a country that imports a significant portion of what it consumes, this decline in imports has dramatically exacerbated the shortages of basic food products, as well as critically needed medicines. Scarcities fuel a parallel market where goods can be obtained, but at exorbitant prices. Since the economy is dependent on imports for much of its production (including services), the steep decline in imports has contributed to a prolonged recession. And the scarcity of foreign exchange has fueled inflation of more than 500 percent annually.

“Oil revenues are the lifeblood of the Venezuelan economy, no matter who is in power.”

Shortages have generated discontent across the political spectrum. A new government program, CLAP, is providing food to millions of families, but they have also been inadequate and haphazard, and many areas never received allocations. The government has also refused to decisively tackle an irrational exchange rate, allowing currency speculators to create havoc in the economy and profit handsomely from the plight of those seeking dollars. They have not addressed corruption, the stifling price controls, or subsidies that they can ill afford to maintain. The tragedy, however, is that to date, neither the government nor the opposition has offered a concrete plan to address Venezuela’s serious economic issues. The government suggests staying the course, hoping the price of oil will increase; and the opposition argues that by simply replacing Maduro conditions will improve.

On the political front, both sides are engaged in the politics of brinksmanship. Fully cognizant that it would have no standing, in January 2017 the opposition-controlled national assembly declared the president to have “abandoned” his office. When confronted with a presidential recall, which the electoral institute initially approved, pro-government supporters waited until late in the process to file complaints about signature gathering in five states. Though the complaint may have had merit, waiting to the last minute fueled opposition charges that the government manipulated the procedure. Subsequently, there was foot dragging in setting the date for local and regional elections (they have now been set). The most egregious act, (since rescinded) involved the decision of the Supreme Court that the National Assembly was in desacato, (swearing in assemblymen that had previously been ruled invalid) and therefore the Supreme Court could assume their duties (also since rescinded). Adding fuel to the fire, the government declared that opposition leader Henrique Capriles could not run for office since he had accepted funds from a foreign government for a project in his state.

In this tense climate, on 1 May, President Maduro proposed activating a provision of the Venezuelan constitution that allows him to convene a Constituent Assembly. The 1999 constitution allows different political entities to call for a Constituent Assembly, including the president, so Maduro has the authority to initiate the process. The real issue, however, is that his action represents a continuing top down effort to alter the balance of power in the country. Critics on the left see it as an abusive bureaucratic maneuver that subverts popular participation and breaks from the practice adopted in 1999. Those on the right see as it as a ploy by Maduro, who faces a potential electoral defeat and now proposes to utilize the supra powers granted to a constituent assembly to subvert the existing institutions. What is clear is that the Constituyente under its present formulation exacerbates contradictions and lessens the likelihood of dialogue between the government, the opposition, and a growing sector of Venezuelan society that increasingly does not identify with either side. As importantly, the Constituyente offers no practical solution to the serious economic crisis facing the country.

Venezuela faces a complex reality; there are no simple solutions, and there is no going back to 1998 when Chávez was elected. The current politics of brinkmanship will not resolve the crisis in Venezuela. Viewing the nation as the exclusive domain of one group or another increases the social and political divide. Foreign meddling, or worse saber rattling, only exacerbates matters. Appealing to the military to overthrow the government undermines democracy. Going forward, however, there must be guarantees for all sides; the electoral process and the popular will must be respected. Violence, threats, and recrimination must stop, and there must be recognition that only through concerted dialogue will Venezuelans deescalate the current political crisis, address the serious issues the country faces and avoid a crippling stalemate.

Miguel Tinker Salas is Farmer Chair in Latin American History and Professor of History and Chicano/a Studies at Pomona College. He is the author of The Enduring Legacy: Oil, Culture and Society in Venezuela and Venezuela: What Everyone Needs to Know®.