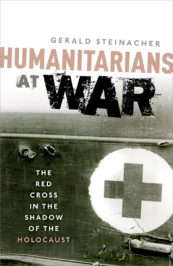 Humanitarians at War: The Red Cross in the Shadow of the Holocaust

Built on the Geneva Conventions of 1949, the International Committee of the Red Cross (ICRC) was founded to protect the lives and dignity of victims of armed conflict and violence and to provide them with assistance. But despite being one of the world’s most revered aid organizations, the ICRC has a complicated and unsettling history.

The following excerpt from Humanitarians at War examines the disconnect between the ICRC and German Red Cross during the Holocaust.

Cries for help for concentration camp inmates came soon after Hitler’s appointment as Chancellor. A Jewish refugee in April 1933 wrote to the ICRC in a dramatic letter about the brutality in such camps: ‘I beg you again in the name of the prisoners – Help! Help!’ The writer referred to Dachau near Munich, the first regular concentration camp set up by the Nazis. A major obstacle for the ICRC was legal in nature. As pointed out earlier, the 1929 Geneva Convention protected soldiers, not civilians. As a result, and according to international law, the treatment and welfare of German Jews detained in camps in Germany in the Nazi era were considered to be the internal affairs of that country. Moreover, the ICRC continued to understand its main mission as caring for wounded or imprisoned soldiers. It thus had few legal tools with which to help Jews and other victims of persecution in concentration camps.

“Burckhardt said to his ICRC colleagues that it is ‘dangerous to occupy oneself ’ with the concentration camps and therefore extremely important to act with discretion. The ICRC visit would certainly be used by the Nazis to show how marvellous everything was…”

Soon after the Nazis came to power in Germany, Huber, the long-time president of the ICRC and an experienced lawyer and devoted Christian, decided that his organization should provide aid to detention and concentration camp inmates in Germany. But what could be done and how could it be done? Huber agreed as early as September 1933 that ‘the intervention of the ICRC in Germany in favour of political prisoners is a very delicate question’. At the same time, he was happy that Burckhardt showed an interest in this problem and was willing to take steps. A case should be prepared and discussed with the German Red Cross. The president of the Swedish Red Cross also addressed the issue of Nazi concentration camps with the ICRC and the German Red Cross president. Prince Carl of Sweden pointed to the decision made by the Red Cross family that they had an obligation to care for political prisoners. After stressing the deep friendship between Sweden and Germany he stated that he was acting in ‘the interest of Germany and the humanitarian cause’.

The German Red Cross responded that it took an interest in concentration camp inmates and could visit the camps anytime. The situation there was good, housing and food was satisfactory, sports activities and wellequipped hospitals were provided. The German Red Cross official then even went so far as to write that the living standard in the camps were higher than most of the inmates were generally used too. The Germans then invited the Swedish Red Cross president to visit German concentration camps and to convince himself about the good conditions there. Huber was forwarded this letter by his Swedish colleague. It must have aroused his suspicion since the parallels with Mussolini’s invitation were obvious. He certainly considered a possible Nazi propaganda coup, but he had to save face. If Sweden was about to inspect Nazi camps, the ICRC should do so too. The visit of an ICRC delegation to a number of concentration camps was now seriously considered. The German Red Cross president let Huber know that they had already asked for permission from the German government and had ‘found willing agreement’. Max Huber was probably more concerned than delighted to receive the news. The Nazis were obviously eager to get the ICRC ‘inspecting’ their camps. The German Red Cross made no secret of the fact that Burckhardt was their man of choice: ‘It can certainly be expected that Professor Burckhardt will lead the [ICRC] delegation’.

“German Red Cross official Walther Georg Hartmann, the most important contact between Geneva and Berlin, was often praised as being one of the few remaining humanitarians in the leadership of his organization. Yet even he had been a member of the Nazi Party since 1933.”

Caution was the order of the day during a September 1935 meeting discussing the next steps. Based on his recent experiences with German officials, Burckhardt said to his ICRC colleagues that it is ‘dangerous to occupy oneself ’ with the concentration camps and therefore extremely important to act with discretion. The ICRC visit would certainly be used by the Nazis to show how marvellous everything was, Burckhardt explained to his ICRC colleagues. Of course, he knew what was really going on there and said that he had just recently been made aware of murders in camps. Burckhardt showed himself concerned about the dangers of abuse of the planned inspections—and the potential propaganda value for the Nazis. But the ICRC intervention might also help to improve the situation of the inmates. In contrast to wartime, the argument of reciprocity would not work in the case of concentration camps. Burckhardt asked his ICRC colleagues to carefully balance these pros and cons. Other speakers at the meeting stressed that the visit would probably not change the situation, even though the Nazis cared very much about world opinion, in particular in the views of the United States and Great Britain. The two women in the meeting, Suzanne Ferrière and Renée-Marguerite Frick-Cramer, stated that the ICRC should at least do everything to give news to the families of the inmates. As we saw earlier, Burckhardt’s visit took place and his report contained only a mild critique. His main criticism was that political prisoners and criminals were not separated. SS officer Reinhard Heydrich, soon to be one of the main organizers of the Holocaust, reacted to Burckhardt’s critique in a short letter, where he showed himself listening, but not greatly impressed: ‘From a national socialist point of view political criminals are on the same level as professional criminals; this is also evident from the new penal code.’ ‘Heil Hitler!’

The ICRC quickly realized that very little could be done for political prisoners in Nazi hands, particularly since the national Red Cross Society in Germany had opted to fall in line with the regime—a process known as Gleichschaltung—rather than face being shut down. In many ways the ICRC depended on the cooperation of the German Red Cross to achieve its mission there. The German Red Cross was deeply Nazified and obstructed many attempts of the ICRC to help concentration camp inmates. German Red Cross official Walther Georg Hartmann, the most important contact between Geneva and Berlin, was often praised as being one of the few remaining humanitarians in the leadership of his organization. Yet even he had been a member of the Nazi Party since 1933. Nazi Party files describe him as a ‘political leader’ of the Nazi-aligned association of the German Red Cross and a member in various sub-organizations of the party. These affiliations, interestingly, did not hinder his postwar career for long. In 1950 Hartmann became the secretary general of the refounded Red Cross in democratic West Germany. This may have been due to his relatively moderate position; Hartmann does not appear to have been a fanatical Party man, nor was he directly responsible for war crimes. His superior however certainly was. In 1937 SS-General Dr Ernst Robert Grawitz was appointed leader of the German Red Cross. Grawitz, a fanatical Nazi and close follower of SS leader Heinrich Himmler, was himself deeply implicated in the euthanasia murders of handicapped people and medical ‘experiments’ in concentration camps. Men such as Grawitz in the German organization’s leadership made sure that the actions of his Red Cross colleagues were in line with the policies of the Nazi leadership. The German Red Cross had for all practical purposes lost its independence and neutrality and turned into a National Socialist medical service unit supporting Hitler’s Wehrmacht.

Gerald Steinacher is an Associate Professor of History and the Hymen Rosenberg Professor of Judaic Studies at the University of Nebraska-Lincoln. He is the author of numerous publications on German and Italian twentieth-century history, most recently Nazis on the Run: How Hitler's Henchmen Fled Justice (2010), which was awarded a National Jewish Book Award by the Jewish Book Council in 2011, and Humanitarians at War: The Red Cross in the Shadow of the Holocaust.