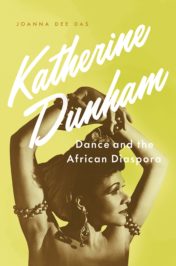 In October 1944, the African American choreographer Katherine Dunham (1909-2006) stood in front of an audience in Louisville, Kentucky and announced that she and her dance company would not return to Louisville until the city desegregated its theaters. Word of her brave stance ricocheted across the country, finding its way into a newspaper in Indiana, where a fifteen-year-old boy wrote her an admiring letter saying that she was an inspiration in the fight for racial equality. A few months later, Dunham again made headlines by purchasing a mansion on Manhattan’s storied Upper East Side, effectively attempting to integrate the highest echelons of New York society. Columnist Dan Burley of the New York Amsterdam News wrote, “Somewhere down the line the dream of a new world envisioned by both Katherine Dunham and [singer] Paul Robeson is bound to appear.”

Despite being widely recognized during her time for her activism, Dunham does not currently figure in the American collective consciousness about racial justice movements. Martin Luther King Jr., Malcolm X, or Fannie Lou Hamer more easily come to mind, people who led the “classic” phase of the Civil Rights Movement. In elementary school I learned, as many American schoolchildren do, that the Civil Rights Movement began in 1955 when Rosa Parks refused to give up her seat on a Montgomery bus. A decade earlier, however, Dunham was on the front lines of the Black Freedom Struggle.

In particular, Dunham is a model for the artist as activist. Though often overlooked in official narratives, artists are necessary to social justice movements. They are the ones who imagine a better future; they possess a gift to see beyond the bleak present and share that vision with others, whether through lyrics to a song, paint on a canvas, or in Dunham’s case, dancing bodies onstage. As celebrities, their voices can have a profound influence on popular culture. The peak of Dunham’s career took place during the decades of the 1930s through the 1970s, a period often romanticized by white Americans as the halcyon days of the “American century.” For black Americans, however, as well as for people of many other ethnic groups, the mid-twentieth century United States was often a place of racial terror and oppression. Between 1924 and 1965, the United States shut down its borders, reducing immigration to almost zero and even turning away Jewish refugees fleeing Nazi Germany. Lynchings and other forms of anti-black violence occurred routinely, often openly encouraged by local and state governments. In the late 1940s and into the 1950s, Cold Warriors in the government silenced dissent and viewed racial justice activism as tantamount to treason.

Dunham never gave up fighting, both onstage and off, for the change she wished to see in the world: namely, the end to racial discrimination on a global scale and the forging of world peace based on intercultural exchange and understanding. In the 1930s, she conducted ethnographic research on Caribbean dance and creatively interpreted what she learned with sensitivity and intelligence for the concert dance stage. Her choreography had an important political impact by challenging stereotypes about black cultures and offering a vision of liberation to her black audiences. In Dunham’s highly theatrical dance revues, her dancers and musicians—who came from many different countries, melding their various rhythmic sensibilities and cultural backgrounds together—literally embodied the cosmopolitan, harmonious future she envisioned. The same was true of the Katherine Dunham School of Dance, which she founded in 1944 in New York. Journalists remarked on the interracialism and internationalism on display at the school, in which teenagers from Harlem mingled with budding actors Marlon Brando and James Dean, Vodou singers and drummers from Haiti, and aspiring dancers from Ireland and Palestine.

Nor did Dunham limit her activism to the United States. In Brazil in 1950, she prepared a lawsuit against the Esplanada Hotel for refusing to lodge her because of her race, and the streets of São Paulo filled with protestors to support her cause. Brazil’s legislature quickly wrote, and passed, a bill banning racial discrimination. Soon thereafter, she began choreographing a new thirty-minute dance piece, Southland, which dramatically depicted a lynching and its tragic aftermath. She premiered it in Santiago de Chile to the consternation of local American embassy officials, who feared it would provide fodder to the strong Communist movement in the country. Despite warnings from them, she re-staged Southland in 1953 in Paris, then let it drop from her repertoire because of the emotional and psychological strain it imposed.

This strain helps explain why Dunham was not always visibly on the front lines. From 1955 to 1965, she barely set foot in the United States. She did not March on Washington, sit in at a lunch counter, or organize voter registration. In our current call-out culture, we are often quick to judge when someone does not seem one hundred percent “woke,” meaning, always already committed to social justice in every facet of their lives. But inconsistency can be generative. Every farmer lets a field lie fallow for a season to replenish growth. This approach is not an excuse for inaction, but rather a recognition that people can contribute to social justice in their own ways and on their own time frames that allow for regeneration of the spirit. Decades before the phrase “self-care” entered the lexicon, Dunham insisted on staying true to her artistic dreams and living a life filled with beauty. In her holism, her internationalism, and her melding of arts and activism, Katherine Dunham inspires us to envision a better world and take steps to make it happen.