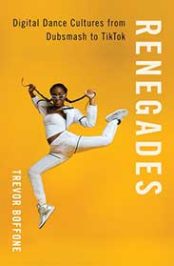 I didn’t enter the world of digital dance cultures as a scholar. When I was introduced to TikTok and Dubsmash in October 2018 by my high school students, I first engaged with the platforms as a dancer. Despite having no formal training in dance and believing that any opportunity for me to become a dancer had passed me by, I was suddenly dancing alongside my students on a number of digital platforms that facilitated a growing screendance community. These platforms—namely TikTok, Dubsmash, and Triller—became part of my every day vernacular as the Gen Z dance moves that fill those spaces such as the Woah, the Mop, and the Wave became my choreography. Suddenly, I was a dancer.

In just over three years since TikTok’s entry into the United States and Dubsmash’s re-launch as a dance challenge app, so much has changed. When I joined these apps, posting videos dancing alongside my students, I was one of few adults among millions of teenagers. In fact, even today, Dubsmash is still an almost exclusively Gen Z space. TikTok, bolstered by the pandemic, has become a home for social media users of all ages even if young people continue to dictate the app’s dominant culture. TikTok and Dubsmash’s emergence as critical spaces for digital dance fall into a lineage of screendance platforms that have proliferated since the dawn of the internet. Although screendance has been steadily gaining popularity, the pandemic accelerated this trend.

As with most things during the pandemic, the digital dance world saw a dramatic shift that both changed the culture and solidified many of the trends that had been shifting on the sidelines well before March 2020. Seeing this, dance scholars Harmony Bench and Alexandra Harlig guest-edited a special issue of The Journal of Screendance that responded to the nuanced ways that the pandemic has shifted the ways we engage with dance on digital media. Bench and Harlig note, “Activities once on the sidelines of the dance field are the new normal: teaching technique on Zoom, holding online dance film festivals, DJing house parties on Instagram, streaming archival performance documentation, making TikToks.” Indeed, screens are where we dance now.

As digital dance cultures became more normalized, scholars and the general public began to take notice. This was no more apparent than on 12 March 2021 during the This Is Where We Dance Now: Covid-19 and the New and Next in Dance Onscreen Symposium, produced by Harmony Bench and Alexandra Harlig to coincided with the special journal issue. The online symposium began with a keynote roundtable featuring dance and digital media scholars Crystal Abidin, Kelly Bowker, Colette Eloi, Pamela Krayenbuhl, Chuyun Oh, and myself. Each scholar presented new research about how platforms such as Dubsmash and TikTok have exploded during the pandemic, making what was once something largely associated with teenagers in the US to something more universal. Now, dancing on TikTok, Triller, Dubsmash, and the like is not just an activity filling the hallways of high schools across the US. Rather, digital dance platforms have become an integral part of the mainstream.

As TikTok and Dubsmash have solidified themselves in mainstream US culture, so too have many of the conversations I engage with. Discussions about artist credit, monetization, choreography, activism, and community-building on social media apps, for example, are commonplace now. Casual onlookers now see these apps as serious spaces for artistic production which is the antithesis to how adults diminished young people’s content in the early days of these apps.

Take for instance the story of the Renegade Dance Challenge set to K-Camp’s song “Lottery.” The Renegade Dance entered the mainstream in Fall 2019 after Charli D’Amelio, TikTok’s most-followed creator, posted a video of her performing the dance. The dance took off, becoming what is arguably the most famous dance in TikTok’s short history. But TikTok isn’t where I first encountered Renegade and Charli D’Amelio wasn’t who I associated the dance with. I first learned about the dance from my high school students who had seen it on Dubsmash. The dance wasn’t created by D’Amelio, but was created by Jalaiah Harmon, a Black teen who wasn’t credited for her choreography and was seemingly left behind. After a media firestorm in January and February 2020, Harmon was rightfully credited as the mastermind behind the Renegade Challenge. Her popularity and career both took off, demonstrating the monetization that corresponds with social media virality.

The case of the Renegade signalled a shift in TikTok culture. Soon after, TikTok’s major talents such as D’Amelio and Addison Rae Easterling began giving dance credits in their videos, which modelled a culture of crediting artists. Their followers soon began giving credit, as well. By the time Keara Wilson choreographed one of 2020’s biggest dances, the Savage Challenge set to Megan Thee Stallion’s song of the same name, the entire landscape had changed. Wilson immediately was given credit, received the blue checks on Instagram and TikTok, had articles written about her, and even had the stamp of approval from Megan Thee Stallion. As TikTok grew in import throughout 2020, this became common practice, demonstrating how digital dance spaces became more recognized and respected by mainstream US culture as well as the media who had frequently disregarded TikTok and Dubsmash as silly spaces for teenagers.

Indeed, now looking forward into what the future might hold for screendance, we can see that the pandemic has ushered in many changes that were likely inevitable. Social media dance spaces have been normalized.

Trevor Boffone is a Lecturer in the Women's, Gender & Sexuality Studies Program at the University of Houston and a Spanish teacher at Bellaire High School. His work using Dubsmash and TikTok with his students has been featured on Good Morning America, ABC News, Inside Edition, and Access Hollywood, among numerous national and local media platforms. He is the co-editor of Encuentro: Latinx Performance for the New American Theater; Nerds, Goths, Geeks, and Freaks: Outsiders in Chicanx and Latinx Young Adult Literature; Shakespeare and Latinidad; and Seeking Common Ground: Latinx and Latin American Theatre and Performance.

The Black Death: how did the world’s deadliest pandemic change society?