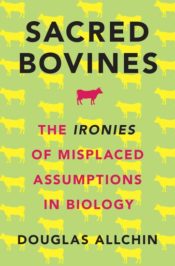 Sacred Bovines: The Ironies of Misplaced Assumptions in Biology

Transgender issues have made significant headlines in the United States. Not long ago, North Carolina struggled to repeal a 2016 law that required people to use only public restrooms that matched the sex on their birth certificate, not their lived gender identity. Only weeks earlier, the US Supreme Court declined to hear a case from a Virginia student on the same issue. Then, in mid-April, over eight million viewers of the “Survivor” TV series watched as one competitor tried to malign a fellow contestant by exposing him as transgender.

At the same time, however, common cultural assumptions surrounding “basic” conceptions of sex and gender are replete with ironies. They assume that male and female should be clear, discrete categories; that assigning sex unambiguously is an appropriate baseline; and that anatomies, physiologies, and behaviors naturally align in a uniform and dichotomous fashion. Not so, biologically speaking. How, indeed, do we define male and female scientifically? Regardless of one’s definition, exceptions can be found. Sex is not either-or. Accordingly, a binary framework for interpreting gender seems ill-informed.

For example, consider an individual who due to their genetic profile does not generate the enzyme 5-alpha-reductase (as portrayed in Jeffrey Eugenides’ Pulitzer Prize-winning novel Middlesex). Such a person, based on outward appearances, will be labeled female at birth. At puberty, however, hormone levels change, the penis grows, and the voice deepens. Male gonads, one finds, had been there all along. But the development of the other traits had been dramatically displaced in time. Cases in one village in the Dominican Republic are so common that they have a special name: guevedoces, or sometimes machihembras. What does “sex assigned at birth” mean in a case like this, when so much changes?

Nor is sex necessarily static or fixed. Many tropical fish change sexes during their lifetime, sometimes in a matter of hours. In clown fish, when females die, males can become females—a provocative detail not depicted in the popular animated film, Finding Nemo.

In other species, both sexes exist simultaneously. Snails, earthworms, barnacles, and many deep sea fishes are hermaphrodites, having both types of gonads, and play two reproductive roles. Sex is not exclusively either-or.

Traits associated with the sexes are not consistent either. Not all humans with testes develop extensive facial hair or muscle mass. Nor do all those with ovaries develop large breasts or exhibit menses. Mosaics of all sorts can be found—all produced by natural causes. In some mammals, such hybrids are the norm—in spotted hyenas, kangaroo rats, bush babies, and Old World moles. Thus, one cannot universally correlate any set of traits exclusively with one type of gonad. These features, so often used to delimit the sexes, hardly assort uniformly, and therefore cannot definitively distinguish male and female.

Many people imagine that biological science can establish sex unambiguously. In a common perception, the chromosomal makeup of human females is XX, and males XY. Yet in some individuals, the genes that activate hormones related to differences in male fetal development have been translocated to an X-chromosome. The developmental male is XX. Other chromosomal combinations, such as XO and XXY, are well documented and have their own distinctive body biologies. Relying on genetics and chromosomes does not resolve all cases.

For similar reasons, even behaviors cannot delineate male and female. In one fascinating pair of experiments, the genes of some fruit flies were manipulated, generating ostensibly female flies that exhibited typically male mating behavior and males that did not. In seahorses and spotted sandpipers (among other species), males are the primary protectors of offspring. Does that make them less “male,” or transgendered as “maternal”?

As indicated by these many examples, organisms that do not follow conventional conceptions of male and female are biologically widespread. Nor are human cases rare. In the United States, the transgender label includes some 1.4 million individuals, or more than one in every 200. One cannot easily dismiss them as mere “exceptions.” They arise through nature. Yet ironically some people view them as “unnatural.”

Ultimately, there is no biological foundation to male and female as discrete, pure categories. Accordingly, such labels on birth certificates have limited scientific meaning. The very conceptions of gender and transgender, especially as related to sex, begin to dissolve.

Issues about personal identity surely matter. Yet public discourse might benefit from reflecting on why we adopt the categories of male and female and imbue them with such significance. Why do so many people consider them “natural”? And, finally, what is at stake—politically, ideologically, and culturally—in trying to preserve sex and gender as unambiguous dualities, when the biology does not support them? Perhaps we might gain more insight into why the notion of transgender individuals seems to elicit such deep emotions and controversy.

Douglas Allchin is a historian and philosopher of science and science educator. He writes a column for American Biology Teacher, essays now collected in Sacred Bovines: The Ironies of Misplaced Assumptions in Biology (OUP, 2017).