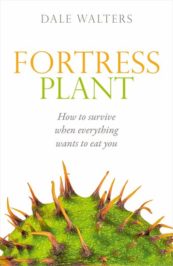 Fortress Plant: How to survive when everything wants to eat you

Spring is a wonderful time to be in the garden. New growth is everywhere, offering the prospect of colour and fragrance as the summer approaches. But we humans are not the only ones to love this. For our invertebrate neighbours all those fresh, juicy leaves present a magnificent feast. Before you know it, many young leaves are sporting irregularly-shaped holes, while others have been stripped bare. Glistening slime trails criss-crossing the soil bear witness to the fact that slugs and snails have been gorging themselves on our precious plants, particularly at night or in wet weather.

More than 40 species of slug can be found in Britain, most of which are harmless. Just four species cause any trouble in the garden. Of these, the garden slug (Arion hortensis group), dark in colour with whitish sides and an orange sole, is the smallest at just 3cm. In spite of its diminutive size it has a gargantuan appetite, munching its way through tender stems at ground level, moving higher up the plant to devour leaves and even burrowing into the soil to feast on root crops such as potato.

Probably the most damaging slug in your garden is the grey field slug (Derocereas reticulatum). At 4cm, it’s a little bit bigger than the garden slug and will work its way through most vegetation in the garden.

Slugs tend to operate at ground level, rasping their way through vegetation within reach, but snails are more adventurous: they can scale vertical surfaces gaining access to plants in tubs and hanging baskets. The species most likely to be a problem in the garden is the common garden snail (Cornu aspersum).

These slimy predators clearly have favourite prey. Hostas, Delphiniums and Dahlias are particular favourites, and seedlings are preferred over mature plants. But exactly how slugs and snails discriminate between plants has exercised researchers for many years. Some work suggests that the molluscs are attracted to preferred host plants by volatile chemicals, although seedlings might also use volatile compounds to signal their defensive capability. In fact, some workers have observed that snails have a remarkable ability to discriminate between seedlings of varying defensive capability even before their first mouthful.

Gardeners wage their own battle against the molluscan menace. Remarkably, so too do the plants; many have developed sophisticated defences of their own.

The cruciferous plant, Arabidopsis thaliana, though not a popular garden plant, is much-used by plant scientists. In common with other crucifers, A. thaliana contains sulphur-rich chemicals known as glucosinolates. Besides imparting the pungent aroma and bitter taste to cabbage and Brussel sprouts, glucosinolates are toxic to many invertebrates, including slugs. Researchers in Germany, found that A. thaliana can detect slugs, probably via the presence of specific chemicals in the slugs’ mucus slime trails, whereupon levels of defensive glucosinolates are increased in an attempt to deter the attackers. Levels of these defensive chemicals were highest in the plant at night, correlating well with the nocturnal activity of slugs and snails.

Jacobaea species, which includes ragwort, use different chemicals to ward off molluscs. They contain pyrrolizidine alkaloids which are highly toxic to slugs. Reducing palatability is another option and in some plants the presence of silicon puts slugs and snails right off their meal.

When facing microbial attack, the salicylic acid produced suppresses jasmonic acid, giving priority to tackling the microbial onslaught. Unfortunately, this compromises defence against invertebrates and slugs, it would appear, take advantage of this. As the famous song says, ‘Anything you can do I can do better’. Researchers wondered whether slugs might be able to manipulate the defences of their hosts and with this in mind, studied the mucus slime trails of 13 slug species. The slime of one slug, D. reticulatum, contained salicylic acid, suggesting the possibility that this slug might be able to thwart defences in the plant by suppressing jasmonic acid formation.

Some plants are capable of warding off attack by slugs and snails, but many of our favourite garden flowers and vegetables seemingly cannot get their act together. Should we even attempt to grow Hostas, for example? The answer is yes, since some varieties are more resilient in the face of mollusc attack than others, particularly those with blue leaves or leaves which are thicker and puckered. The variety Sum and Substance, for example, has large, ridged and wrinkled leaves and lilac flowers, is less attractive to molluscs, and suffers less damage as a result.

A non-chemical method that is effective against slugs, but not snails, is the use of nematodes (microscopic eelworms), which are watered on to the soil. When they enter the slugs’ bodies, they pass on bacteria which kill the slugs. The only drawback here is that soil temperatures need to be above 5 °C and the nematodes work best on moist, well-drained soils.

And finally, don’t forget the classic slug defence: the jar part-filled with beer, sunk into the ground near to vulnerable plants. Slugs love a tipple, fall into the jars and drown. Or you could just go into the garden at night, with a torch, especially when it’s damp, and pick the slimy little blighters off your plants and get rid of them – but please don’t throw them into your neighbour’s garden.

Dale Walters, Emeritus Professor of Plant Pathology, Scotland's Rural College (SRUC), Edinburgh. Until his retirement in February 2016, he was leader of the Crop Protection team at SRUC's campus in Edinburgh, where his research focused on induced resistance to plant pathogens. He obtained his PhD from Lancaster University in 1981 and was awarded a DSc by them in 1999 for his research on plant-pathogen interactions. He is the author of more than 160 scientific papers, has edited three books and has written two textbooks, the latest of which is Physiological Responses of Plants to Attack (Wiley-Blackwell, 2015). His work on induced resistance has been covered in the media. He is the author of Fortress Plant.

Ants are picky when using tools for foraging