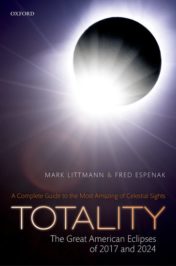 On 21 August, millions of Americans will flock to a narrow strip along the country – the path of totality – to witness a rare event: a total solar eclipse. Many will try to capture the beauty of the phenomenon in their minds, but a great number will attempt preserving physical documentation of the eclipse. The following shortened excerpt from Totality: The Great American Eclipses of 2017 and 2024 shares photography tips for the upcoming 2017 total eclipse to help enthusiasts make the most of this event.

How do you capture the spectacle of a total eclipse with a camera? Photographing an eclipse isn’t difficult. It doesn’t take fancy or expensive equipment. You can take a snapshot of an eclipse with a simple camera (even a smartphone) if you can hold the camera steady or place it on a tripod.

The first step in eclipse photography is to decide what kind of pictures you want. Are you partial to scenes with people and trees in the foreground and a small but distinct eclipsed Sun overhead? Or do you prefer a closeup in which the radiant corona or vivid red prominences of the eclipsed.

Sun fill the frame? Your decision will determine what kind of equipment you need.

New technologies in cameras and electronics are making eclipse photography easier than ever before. Even beginners can take great eclipse photos with some careful planning. Planning is the key. The day of the eclipse is not the time to try out a new tripod or lens. You need to be completely familiar with your camera and equipment, and you need to rehearse with them weeks before the eclipse. A total eclipse grants you only a few precious minutes and everything must work perfectly. Nature does not provide instant replays.

In less than a decade, digital cameras have revolutionized the way we shoot pictures. The price of electronic image sensors and memory cards has plunged while the ability to capture fine detail has leapt into many megapixels. The result: Digital cameras have completely replaced film cameras. But perhaps you are too young to remember film cameras! Back in the old days of film, eclipse photographers had to carefully pace themselves because there were only 36 exposures on a roll of film. To capture the diamond ring effect at the beginning of totality, the corona during totality, and the second diamond ring at the end of totality, you had to take pictures sparingly to make your film last. Today, with a large memory card, you can shoot hundreds of digital eclipse images in a few minutes and see your results immediately after totality ends.

Point-and-shoot or compact cameras are the simplest digital cameras you can buy. They usually have autofocus lenses, automatic exposure modes, and a small built-in flash. Although the most basic cameras have a single-focal-length lens, more advanced models include a zoom lens.

Many point-and-shoots are small enough to fit in a pocket, making them perfect for snapshots of vacations, parties, and other events. They are popular with people who do not consider themselves photographers but want an easy-to-use camera.

Smart phones are rapidly replacing point-and-shoot cameras as the most popular type of digital camera. These ingenious devices were the stuff of science fiction only a decade ago. Besides shooting photos, they have downloadable applications or apps for almost everything imaginable: texting, e-mail, web browsing, music, games, and alarm clock, just to mention a few. You can even use them to make phone calls! Both point-and-shoots and smart phones are great for capturing simple snapshots of an eclipse. You can also use them to shoot a panorama around the horizon during totality. Although you can handhold either one, a tripod is a better choice for support, especially during the subdued twilight of totality. Point-and-shoots have a threaded socket on the bottom for tripod attachment, while smart phones will require a special bracket to securely attach them to a tripod.

The easiest way to capture the eclipse is to take a few wide-angle shots of the sky, horizon, and landscape before, during, and after totality. This sequence might show the Moon’s dark, fast-moving shadow approaching from the west or racing away over the horizon to the east. Place yourself or some other interesting subjects in the foreground to give the photos some scale. If your camera has a zoom lens, the widest-angle setting will produce the most dramatic images. Your camera’s built-in auto-exposure feature should work well. Just be sure to turn off the automatic flash feature so you don’t annoy observers nearby. If your camera has an exposure bracketing feature, use it for insurance to get the best exposure of the total eclipse. You’ll also capture any bright planets near the Sun during totality.

Eclipses provide other phenomena that make interesting pictures, such as the crescent images of the partially eclipsed Sun produced by tree foliage. The narrow gaps between leaves act as “pinhole cameras” and each projects its own tiny (and inverted) image of the crescent Sun on

the ground. This pinhole camera effect becomes more pronounced as the eclipse progresses. You can make your own pinhole camera to project the crescent Sun with pinholes punched in thin cardboard, or with a wide-brimmed straw hat.

You can even produce the effect in the shadow of your hands by loosely lacing your fingers together. Watch the crescents form when the light passes through the gaps between your fingers. The profusion of crescents on a white wall or on a person’s face makes a nice photographic memento. Once again, you’ll want to disengage the automatic flash on your camera.

If your goal is to shoot close-ups of the Sun and Moon during the eclipse, a little more effort is required. These kinds of eclipse images are more challenging than wide-angle landscapes and pinhole crescents. You will need a more expensive camera, a powerful telephoto lens or small telescope, a strong tripod and a special solar filter (for partial phases only).

Successfully capturing magnified views of the eclipse also requires a basic understanding of how digital cameras work as well as careful planning and preparation before eclipse day.

All slideshow images were provided by Fred Espenak and Patricia Totten Espenak. Please do not use without permission.

Mark Littmann has written several popular books about astronomy. Planets Beyond: Discovering the Outer Solar System won the Science Writing Award of the American Institute of Physics. Planet Halley: Once in a Lifetime (Donald K Yeomans, co-author) won the Elliott Montroll Special Award of the New York Academy of Sciences. Reviewers described The Heavens on Fire: The Great Leonid Meteor Storms as a "unique achievement," "altogether satisfying," and "a compelling read."

Mark holds an endowed professorship, the Hill Chair of Excellence in Science Writing, at the University of Tennessee where he teaches three different courses in writing about science, technology, medicine, and the environment. He has helped lead expeditions to Canada, Hawaii, Bolivia, Aruba, and Turkey to observe total eclipses.

Fred Espenak is the most widely recognized name in solar eclipses. He is an astrophysicist emeritus at NASA's Goddard Space Flight Center, where he founded and runs the NASA Eclipse Home Page, the most consulted website for eclipse information around the globe. His Five Millennium Canons of solar and lunar eclipses are seminal works for researchers, archaeologists, and historians.

Fred writes regularly on eclipses for Sky & Telescope and is probably the best known of all eclipse photographers. He leads expeditions for every total solar eclipse and has done so for more than 35 years. In 2003, the International Astronomical Union honored Espenak and his eclipse work by naming asteroid 14120 after him.

Mark and Fred are authors of Totality: The Great American Eclipses of 2017 and 2024.